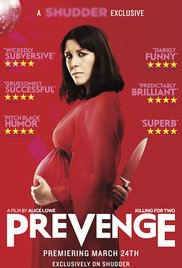 It’s not every day the cinematic world sees a humorous slasher film where a pregnant mother is doing all the slashing, all because her baby tells her to do so. Seven months pregnant herself during an eleven-day shoot, British actress Alice Lowe goes all the way in establishing herself as a triple threat for her directorial debut. Lowe previously co-wrote and co-starred in 2013's Ben Wheatley-directed genre-mixer "Sightseers," and it was such a wickedly offbeat comedy of deathly errors that one can see how naturally Lowe’s tonal deftness came to fruition for "Prevenge."

Lowe plays Ruth, a pregnant mother who’s not in control anymore. With her partner no longer in the picture, it is just Ruth and her unborn daughter still cooking in her belly. When she’s not having check-ups with her midwife (a scene-stealing Jo Hartley), Ruth is out on her quest throughout London for revenge (for reasons that come to light later on) and the pushy demands of Ruth’s baby in a high-pitched, Shirley Henderson-ish voice make her do it each time. Whether it’s offing a creepy pet store owner (Dan Renton Skinner), a leering bar DJ (Tom Davis), a cutthroat business manager (Kate Dickie), or an exercise nut (Gemma Whelan) who doesn’t take well to charity door-knockers, Ruth also gives each victim a kiss on the forehead, post-murder, like a mother does to her baby before bedtime.

What might sound merely like a sick joke about pregnancy driving one to kill, "Prevenge" is actually a gruesomely funny doozy of a tar-black comedy. Since Ruth’s first few victims happen to be men, it also initially leads one to read it as a man-hating fantasy, but it’s anything but. Writer-director-actor Alice Lowe seems to be getting at a nugget of truth most hormonal mothers can probably identify with (this male writer can only assume). Ruth is deeply bonded with the little girl growing inside her belly and will satisfy her no matter what, even if that means corrupting her mind in the process to see what is morally right and wrong. As we come to learn, Ruth’s lover died in an accident made by the tough choice of his rock-climbing team, but Lowe reveals it in a way that’s gradual and not so blunt. Even if the consequences of Ruth’s actions never seem to manifest, what is next for both Ruth and her baby is pretty clear by the end. To read the rest of the review, go to Diabolique Magazine.