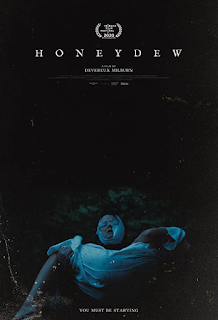 You can practically smell and taste the mystery meat characters eat during writer-director-editor Devereux Milburn’s unusual feature debut, “Honeydew.” A needling couple—actor-waiter Sam (Sawyer Spielberg) and botany graduate student Rylie (Malin Barr)—take a road trip into the weirdo backwoods with sizzling steaks, freshly made sweets, and a loop of “Popeye” reruns playing on a boxy TV. This is clearly the filmmaker's ode to “The Texas Chain Saw Massacre” with its own creepy, deeply weird beat, but as sharply edited and unsettling as "Honeydew" is, the final result is about as pleasant as eating lemons dipped in milk. 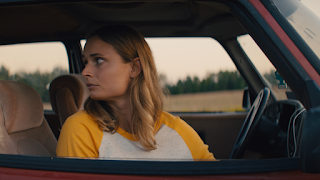 When Sam and Rylie take a break from the drive and camp out in a clearing for the night, the couple is startled by the land owner asking them to leave. With their car battery dead and no phone signal, Sam and Rylie find a rural house occupied by a doddering old woman named Karen (Barbara Kingsley), who offers them her landline to call a mechanic and makes them a steak dinner. Though Rylie is a vegan and Sam doesn't eat red meat anymore due to his high cholesterol, they sit down for some vegetables.  Karen also has a rotund vegetable of a son named Gunni (Jamie Bradley), who silently sits at the kitchen table with gauze around his head, drinking milk out of a long IV straw, dipping lemon wedges in sugar, and watching Betty Boop and Olive Oyl. What wickedness awaits Sam and Rylie?

Sawyer Spielberg, son of Steven with mama Kate Capshaw’s looks, and Malin Barr make a believably incompatible couple, but Sam and Rylie are so bereft of agency once they accept Karen’s invitation to sleep in the basement that it is quite difficult to keep rooting for them. The villain of the piece is amusingly named Karen, but Barbara Kingsley’s Karen is nurturing, eccentric, and then unforgettably unhinged; her performance might be the best thing about the film. There is also a cameo by a familiar face playing one of Karen’s children by the tail end, but it’s a bit too distracting to land an impact.

There are enough allusions to “Hansel and Gretel” in “Honeydew” that one might consider this an outré take on a similarly twisted setup. Devereux Milburn definitely announces himself as a filmmaker to watch, serving as his own editor and crafting the film with pin-prick precision; the use of split (and even perpendicular) screens adds a nice touch of style, too. Then there’s the strange, jangling score and sound design that becomes its own moody soundscape of pops, whispers, grunts and knives sharpening, creating a sense of no escape. “Honeydew” effectively never puts the viewer at ease, but it might too unappealing in a way that leaves one with an icky aftertaste.

“Honeydew” (107 min.) does not currently have distribution. 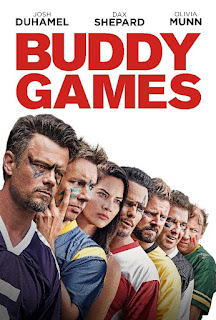 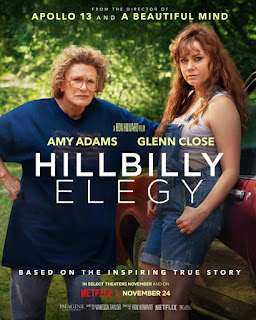 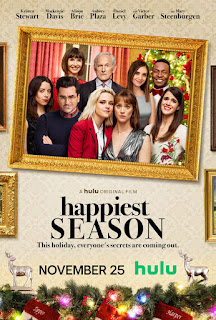 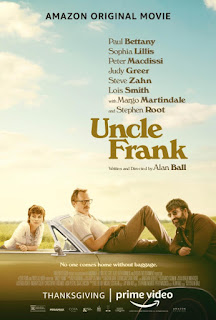 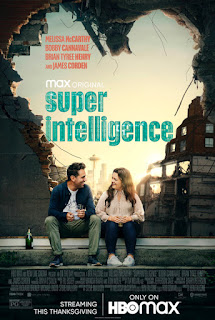 "Superintelligence" not memorable but an amusing-enough vehicle for Melissa McCarthy 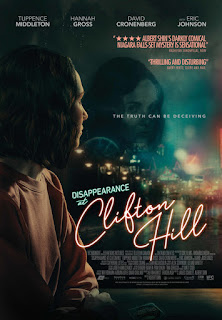 The Woman Who Cried Kidnap: "Disappearance at Clifton Hill" beguiles as a drifty, winding mystery