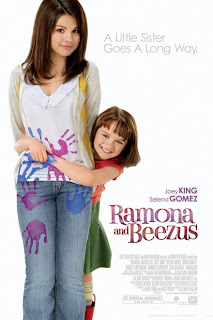 Golly gee this is a gentle movie, but after all it is an adaptation of Beverly Cleary's beloved children's books. Then again, the G-rated "Ramona and Beezus" deals with some real subject matter that a Disney movie usually doesn't touch—like financial troubles and a pet dying—but it always ends with a hug or smile. The closest thing to cuss words are “stinkin” and “guts,” and every character is nice and likable including Sandra Oh's stern, shushing teacher.

Thespian moppet Joey King gives an appealingly offbeat performance as 9-year-old Ramona Quimby who's always getting herself into mischief. A little mugging calls for her troublemaking Ramona but she's never the pest people think she is. Her teenage sister Beezus (Selena Gomez) finds Little Sis to be a nuisance, and sometimes Mom (Bridget Moynahan) and Dad (John Corbett) are exhausted by Ramona's high energy. Crisis strikes when Dad gets downsized at his job and the Quimby house might have to be sold.

"Ramona and Beezus" is a sweet and sunny family film that tween girls will eat up and adults won't hate, and Elizabeth Allen's breezy, bright direction, wise writing, and a surprising adult cast help. From the point-of-a-view of a 9-year-old, the film makes use of Ramona's overactive imagination, shown in colorful flight-of-fancy daydreams (like playground monkey bars turning into a high-adventure ravine). Not to be feared, Allen stages plenty of goofy pratfall shenanigans that are often rigged (like a simple carwash turning into an accidental paint-job) but never heavy-handed. And what's a family movie without a family water-hose fight?

As Ramona and Beezus, King and Gomez not only look like sisters but share a genuine sisterhood. Corbett and Moynahan are well-cast as the parents, and Ginnifer Goodwin and Josh Duhamel are charming together as Aunt Bea and her former flame. "Ramona and Beezus" is better family entertainment than you could ask for.