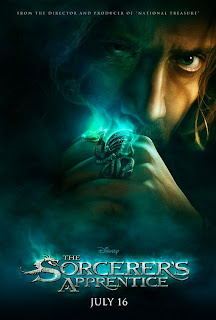 From producer Jerry Bruckheimer's big bucks and director Jon Turteltaub (the team that thought you'd care about the Declaration of Independence being stolen in the "National Treasure" movies), "The Sorcerer's Apprentice" is more of a product than an actual movie. As a matter of fact, it's mostly a premise from Disney's classic segment in "Fantasia" (70 years ago!) when Mickey Mouse was the sorcerer's apprentice, stole his hat and put a spell on brooms and buckets. Now it's reproduced in this booming, effects-laden fast food, but it's faster-paced and more entertaining than you'd expect. Rather than Leopold Stokowski's orchestra, we get One Republic's latest hit “Secrets” on a loop.

After a whirlwind, 740 A.D.-set prologue, it's been a centuries-old struggle between Merlin's apprentices and they're all trapped in nesting dolls known as grimholds. In the next prologue, set in 2000, 10-year-old Dave (in the Mickey role, kinda) on a field trip encounters Balthazar and becomes his apprentice, but after a battle with arch-enemy Maxim Horvath (Alfred Molina), both wizards get stored in a porcelain tomb. The rest of the action flashes forward to the present time, with Dave (Jay Baruchel), now a NYU physics geek, chosen by fate to be “the prime Merlinian,” or the chosen one, when Balthazar returns to be his sensei and puts Dave's magic powers to the test. With Horvath escaping and on the loose through the city, only time will tell before all-powerful witch Morgana (Alice Krith) is unleashed so she and Horvath can raise the dead and cause an apocalypse.

Now, storytelling isn't the point here, as the design-by-committee script (Matt Lopez and Doug Miro & Carlo Bernard) throws a lot of exposition at us. But "The Sorcerer's Apprentice" also throws CGI fireballs and a lot of black magic our way, only the fun kind. With New York City locations put to good use, there's a fun set piece in Chinatown where a Chinese paper dragon transforms into a real, fire-breathing one. And there's a neat hocus-pocus trick called the “Hungarian mirror” trick where people and cars can fly in and out of mirrors. The Mickey short gets reduced to a quick gag in the movie's middle where the brooms have a mind of their own and clean up, cued to Paul Dukas's music. But it's obligatory and not that inspired.

Baruchel is surely a nerd's nerd and usually likable, with the perfect Mickey Mouse ears, but here his Dave is more annoying and forced. Cage slyly gets away with a few loony, Cage-y line readings and has cooler hair than usual. Molina is also having a good ol' hammy time. Teresa Palmer as Dave's childhood crush, Becky, gets thrown into the action too, even if Balthazar says “love is a distraction.” The beautiful Aussie has Kristen Stewart's face but none of the storm-cloud pout.

"The Sorcerer's Apprentice," more manic than magical, is still a passable time-filler that at least fulfills its function.