"Inception" wows our mind and eyeballs but lacks a heart 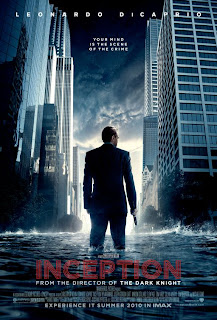 Writer-director Christopher Nolan's latest brainteaser, "Inception," is a real machine, cerebral and visual. If it only had a heart! As if Leonard DiCaprio didn't already suffer enough from dead-wife baggage earlier this year in "Shutter Island," here in "Inception" his character is in the same realm. Leo plays Dom Cobb, working as an ace “extraction” expert specializing in “subconscious security.” With his right-hand man Arthur (Joseph Gordon-Levitt), they enter a person's subconscious and steal information. Cobb's missing his children back in the U.S. and haunted by the death of his wife Mal (Marion Cotillard), that which he's the prime suspect. Expecting to go back home, Cobb is called in for an offer he can't refuse by a corporate magnate (Ken Watanabe) after failing in an espionage attempt to steal one of his secrets: infiltrate a corporate empire heir Robert Fischer Jr.'s (Cillian Murphy) dreams to plant the seed of an idea. This is a far more tricky operation called “inception,” so Cobb assembles a crackerjack team, including a supersmart architect (Ellen Page), a shape-shifting thief and forger (Tom Hardy), and a chemist (Dileep Rao). Only Page knows that his unresolved grief with Mal endanger their mission.

Technically and intellectually speaking, "Inception" is an intelligent, engrossing, and intricately designed thinking man's movie even if it's a heist movie at its core. With a lot of logic origami and game rules to follow (there are leaps between dream levels, and 5 minutes in reality equals 10 hours in a dream). Nolan makes us work, confusing but never losing us, and that's an audacious rarity for mindless summer-movie releases, without wearing those damn 3-D glasses!

All that said, "Inception" is also an emotionally distant picture, even though we spend a lot of time in these people's heads, literally. Cobb and Mal have the most development, helped by DiCaprio and Cotillard's profoundly anguished performances, but that's the only emotional connection the film has. It can be pretty cold to the touch. Though probably Nolan's intention, moving his characters around like chess pieces, the rest of the actors are just cogs in the machine, names and functions with faces. However, they add color and do break the deadly seriousness with some droll humor. As the newest of the group, Page explains to us, and is saddled with, some clunky expository dialogue that shares our confusion (“Wait, whose subconscious are we going into, exactly?”).

It's geeky enough for film-school students and fans of puzzles, mazes, and Nolan's previous work to analyze after multiple viewings, but it's still more of a cool smoke-and-mirrors game than a real movie. The ideas and visuals are undoubtedly cutting-edge and impressive. Uh, for instance, take the “how did they do that?” spectacle of a Paris city folding over in half directly over Page and DiCaprio's heads. And a zero-gravity hallway fight scene, evoking "The Matrix," is a “wow” moment. But the James Bondian skiing sequence in the Canadian Rockies drags a little towards the climax, already set on four different dream planes. The omnipresent, doom-laden Hans Zimmer music score is memorably ominous with fog horns that sound like the Tripods in Spielberg's "War of the Worlds" remake. "Inception" might provoke more admiration for its revolutionary ideas than enjoyment, but you'll have sweet dreams after watching it. And the nicely open-ended conclusion will get audiences talking.