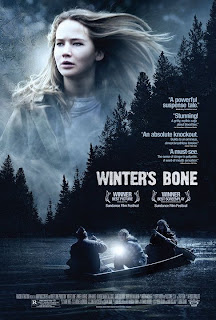 Based on the novel by Daniel Woodrell, "Winter's Bone" is an intensely bleak, gritty, but vivid and compelling piece of folksy Americana. A de-glammed Jennifer Lawrence is stirring and brave as Ree Dolly, a headstrong, dirt-poor 17-year-old in the Ozark Mountains who'd like to join the Army but is burdened with caring for her two younger siblings and her vegetable of a mother. When the law comes looking for her meth-cooking dad (never seen), she finds it her duty to go find him or prove he's dead, or less Ree and her family will lose their property.

Lawrence is so great she should be a role model for young actresses; despite her baby face, she makes Ree a heroine that won't quit her odyssey. John Hawkes as the high-strung, coke-snorting Uncle Teardrop is complex as a guy who might not be able to be trusted but shows a warm side. Dale Dickey is memorably scary as a short-fused woman whose actions towards Ree are nasty for sticking her nose on her property. This tough, harsh story is a simple one, crisply directed and convincingly performed by a mix of professionals and amateurs, though at least ends with a glimmer of hope for Ree and her family.

Writer-director Debra Granik (in her third feature) never softens the edges or lets her film slip into squirrel-eating, country-fried caricature; she handles it with unflinching force and feeling and not a false note. The pacing is deliberate, but the film is marked by specific atmosphere, tension, and realistically flawed characters. Granik's strongest asset is the firm sense of place, strikingly shot with authenticity on-location in Missouri and the winter feeling palpably cold. Neither a showy Hollywood blockbuster nor a pretentious indie flick, "Winter's Bone" feels raw as bone on bone, and Lawrence carries us through this stark winter.