Loose-limbed and long-winded, but "Five-Year Engagement" also smart and funny 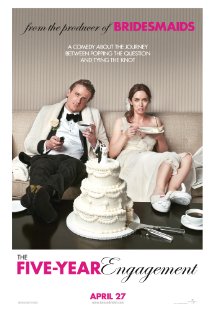 "The Five-Year Engagement" is what 2011's wildly overpraised Sundance darling "Like Crazy" would have been had the latter film shoehorned in comedic bits and told its story with more appealing characters. With that said, many might compare "The Five-Year Engagement" to "Bridesmaids"—"From the producer of 'Bridesmaids'" is plastered all over the advertising campaign—but it's apples to oranges. Without being the raucous R-rated comedy of your expectations or just another bare-minimum romantic comedy, writer-director Nicholas Stoller and co-writer/star Jason Segel's fourth collaborative effort (starting with 2008's "Forgetting Sarah Marshall" and now following "The Muppets") instead chronicles the episodic ups and downs of an un-Hollywood relationship that's well past the early meet-cute. While following a basic relationship-drama playbook, the film circumvents clichés with more relatability, insight, and laughs than a lot of second-rate rom-coms.

When we first meet Tom (Jason Segel) and Violet (Emily Blunt), all that getting-to-know-you business is out of the way. They met at a New Year's costume party, where he was dressed as a bunny superhero and she as Princess Diana, and the rest is an "aww" memory. A year later and living together in San Francisco, Tom's a sous-chef on the rise and Violet's an academic psychologist applying to doctoral jobs. After Tom proposes and the two are engaged, an envelope throws a wrench in the couple's plan to wed: Violet is offered a two-year position at the University of Michigan. She has to take it, and Tom supports her dream, so they post-pone their Big Day a couple years (hopefully before both sets of Violet's grandparents pass on) and make the move to the snow-covered college town where his job opportunities are few and far between. With regrets of giving up his talents on the West Coast bay, Tom finally gets comfortable making flawlessly presented sandwiches at a New Age-y deli, later turning into a bearded hunter that takes up brewing his own mead. Can Tom and Violet save the date and stay in it for the long haul?

Loose-limbed and long-winded, "The Five-Year Engagement" comes from producer Judd Apatow's wheelhouse of epic-sized comedies that somehow teeter-totter sweetness and blue, salty humor. Like "Knocked Up," "Funny People," and "Bridesmaids" (the former and latter great comedies by the way) from Apatow's production house, this one could also stand to lose some flab (about 20 or 30 minutes of it). Clocking in at 124 minutes, the film almost feels like it plays out the five-year engagement in real time, but it is preferable over other movies' quick montages that try developing a pre-fab romance (oh, like say, last week's "The Lucky One"). At times, director Stoller doesn't know when to cut or leave out a wacky, awkwardly wedged-in bit for the DVD's deleted scenes. And yet at other times, he knows exactly when to let a scene or gag play out, similar to the pacing and rhythm of a droll British comedy. We probably didn't need the stakes to be pumped up as much for dramatic tension—Violet's boss (Rhys Ifans) kissing her and then Tom engaging in a playful potato-salad fight with a drunk, smitten co-worker, leaving him to wander into the woods without pants and waking up with a frost-bitten toe—but these characters don't keep secrets. They sometimes struggle with their communication in regards to their true feelings, only prolonging their walk to the altar, but none of their missteps feel like a screenwriter's construct. An extra advantage is that we actually care about Tom and Violet and want to see them find happiness, whether it's with or without each other.

Just having Jason Segel and Emily Blunt as your headlining leads keeps the film effortlessly amiable. Segel has an earnest, easygoing schlubbiness about him that never tires. His Tom isn't unambitious, but has just compromised his own career for the woman he loves so they can finally build their future together. Blunt is more relaxed than she's ever been, and her smile is infectious. Her Violet is never as selfish as Tom makes her feel at one point. When times are good, they're adorable together, and when times are pretty rocky, the two credibly register the appropriate emotions. As the film's secondary couple, Chris Pratt (on NBC's "Parks and Creation"), as Tom's moronic best buddy Alex, and Alison Brie (on NBC's "Community"), as Violet's sister Suzie, are great company. Deserving their own spin-off, Pratt nails every line and Brie (sporting a cute British accent) really pops without overplaying a joke. Though seen in the trailers, Alex's engagement-party slideshow of Tom's past lovers, cued to his own version of Billy Joel's "We Didn't Start The Fire," still earns its laughs from Segel and Blunt's reactions and Pratt's own spontaneous delivery. Brie even gets to sell a moment where, during Suzie's toast, she can't seem to get the words out without bawling her eyes out or sounding constipated. In another priceless bit, Brie and Blunt get to conduct an adult conversation in the voices of Elmo and Cookie Monster (a nod to Stoller and Segel's "The Muppets"?) while in the presence of Suzie's children.

In a genre that most always counts on The Wacky Best Friend and other oddball side characters, the extensive supporting cast is quite lively and on their game here. Jacki Weaver, as Violet's bluntly honest divorced mother Sylvia, is a hoot with all the advice she gives, as are Mimi Kennedy and David Paymer as Tom's folks who give a Dr. Seussian speech at the engagement party. Lauren Weedman hits a one-liner with scene-stealing verve every time as Tom's butch, anti-marriage head chef. In other supporting roles, Mindy Kaling, Randall Park, and Kevin Hart, as Violet's colleagues, all have their respective moments, especially in regard to a sociology experiment Violet concocts with donuts. Also, Brian Posehn and Chris Parnell work their oddball magic, respectively playing Tom's pickle-obsessed employer and a fellow faculty husband who's a stay-at-home dad and knits ugly sweaters. So many familiar-faced funny people turn up that it's possible NBC made a deal with Universal Pictures to give their Thursday Night comedy series performers some more work.

Akin to 2010's underrated "Going the Distance" (where Drew Barrymore and Justin Long questioned staying together from a long distance), there is some real emotional truth in "The Five-Year Engagement" between all the comic set-pieces. Though uneven and flabby, it's uncommonly smart and rapidly sharp-witted, always engaging, and dramatically honest without sacrificing the laughs, and worth a smart, patient audience's commitment. Carrying it through, Blunt and Segel (and Stoller and Segel for that matter) make romantic comedies unforced and fresh again.