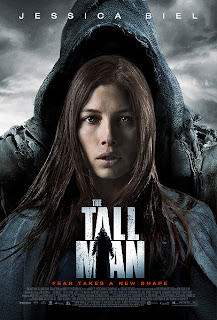 Horror fans' expectations will instantly be dashed if they are hoping French writer-director Pascal Laugier's "The Tall Man" to be another hardcore shocker like his last (2008's gut-wrenching, uncompromising "Martyrs") or even an extension of the Tall Man antagonist from the "Phantasm" series. However, criticizing the film for not fulfilling its marketing campaign or one's preconceptions is just silly and reductive. Laugier belies the disturbing, explicitly grisly nature of his previous horror film by eliminating much of the on-screen violence but doesn't back down on thematically dark, bait-and-switch storytelling. Viscerally reserved but bathing in atmosphere, "The Tall Man" is a different animal: this is an engaging, craftily plotted, and skillfully made mystery-drama that subverts expectations.

The small, rundown town of Cold Rock, Washington, is considered dead not only from the closing of its mine and the lack of jobs and finances, but also from a series of children going missing. (We're given title cards revealing that "800,000 children are reported missing each year in the USA…1,000 disappear without leaving a trace.") The community, made up mostly of trailer-trash types, believes the child abducter to be a mythical boogeyman-like figure known as the Tall Man. A dressed-down, almost-haggard Jessica Biel stars as Julia Denning, a nurse who runs the only clinic in Cold Rock after her doctor husband died several years ago. She doesn't believe in urban legends regarding the Tall Man, but Julia is a mother herself, so guess who's the next child to be kidnapped?

In its favor, "The Tall Man" isn't really about what you think it's about. From the film's dramatic opening credits with a bombastic score and bold-red letters appearing in aerial shots of the town, "The Tall Man" appears to be a thriller at the onset. Taking off as a promisingly harrowing mother-doing-anything-to-reclaim-her-son pic that offers up tense moments and a few jolts in the standard, jumpy sense, the film then reveals its sleight of hand at the 40-minute mark. Laugier takes us in one direction and then in another direction, making us deflect our sympathies again and again. Besides the narrative turn coming as a shock, it's more organic than any of M. Night Shyamalan's last few works. Whereas plot turns on screen can come off contrived and clever for the sake of being clever, this one doesn't feel like a trick on the audience because what we didn't see was there all along.

Given more of a chance to test her skills, Biel turns in her strongest performance as Julia. Initially, she isn't far from the realm of the work she did in the 2003 "Texas Chainsaw Massacre" remake, having to do some running and run through some emotionally high places, until you finally see something new and deeper in her. During a final monologue from her character, she really exhibits something in her eyes that makes you buy the whole thing. Canadian natives Stephen McHattie and particularly Samantha Ferris, as the local Lieutenant Dodd and troubled mother Tracy, also make solid impressions. Lastly, Jodelle Ferland continues to impress, this time not playing an evil tyke but Tracy's mute, equally troubled daughter.

Also quite the mood piece, "The Tall Man" is richly atmospheric and captures a real sense of place with Kamal Derkaoui's starkly picturesque cinematography and Jean-Andre Carriere's production design of the gorgeously misty Cold Rock. Props should also go to the sound department for combining natural and augmented sounds, especially during a chase sequence set on a stretch of road that segues into the woods. The film isn't without its problems, mainly a voice-over narration that feels the need to spell things out and push emotional buttons; it's too much of a heavy-handed device (especially in the very last shot before cutting to black). Less would have been more, but by the end, Laugier still raises ethical questions about parental responsibility without handing out easy answers. With that, he goes to show that there are deeper, more interesting sides to the horror genre than just hacking up body parts.