"Peace, Love & Misunderstanding" not a great film but affable and low-key as comfort food 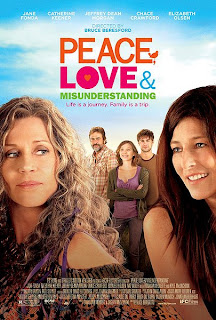 "Peace, Love & Misunderstanding" is as simple and easygoing as its characters' hippie lifestyle, and it's really harmless, too. It graces us with three generations of actresses—Jane Fonda, Catherine Keener, and Elizabeth Olsen are related by blood on screen—and they lift the formulaic material above the level of a sitcom and Lifetime Channel fare.

Keener plays Diane, a tight-assed Manhattan lawyer who's just had the bomb dropped on her that her husband (Kyle MacLachlan) wants a divorce. Needing to get away before they make it official, she takes her kids to go live with her mother Grace (Fonda) in Woodstock. You guessed it, Grace is a wacky, liberal hippie that does pottery and lets the chickens run wild through the house. She also participates in war protests and smokes the ganja. Diane's daughter Zoe (Olsen), a cultured, opinionated vegetarian, and son Jake (Nat Wolff), an aspiring filmmaker, have fun with their grandmother's free-spirited lifestyle. Zoe gets the hots for the town's hunky butcher (Chace Crawford) and Jake develops a crush on a hippie his age (Marissa O'Donnell), so naturally Diane must get her man in the form of one of Mom's protesting pals (Jeffrey Dean Morgan). Naturally, Grace's way of life is just what the family needed.

Directed by Bruce Beresford (1989's "Driving Miss Daisy") and written by newbie scribes Joseph Muszynski and Christina Mengert, the film plays like an indie version of this year's "Wanderlust" crossed with Garry Marshall's schizophrenic "Georgia Rule" (which also co-starred Fonda, but as a strict, ball-busting grandmother, with Lindsay Lohan and Felicity Huffman as her granddaughter and daughter). This one is less amusing than the former but more comfortably handled than the latter. Beresford never pushes behind the camera and captures some pretty scenery of Mother Nature. (P.S. Look closely and you can spot a poster of Beresford's last film, "Mao's Last Dancer," with Kyle MacLachlan's name in clear sight.) When the characters have to repair their issues, the script takes the tidy route. However, a climactic moment, where Diane unties a balloon from a sandbag to let her hair down, would sound hokey and cringe-inducing, but there's something quiet and lovely about it that works. And sure, it's entirely predictable, with obligatory romances for everyone and easy fixes for familial conflicts after secrets are unveiled, but the cast has the power to make it watchable.

After her slapsticky acting comeback in 2005's "Monster-in-Law," Fonda's earthy, charming presence is more appealing here. She doesn't strain for laughs or really play Grace as a cartoon but as a groovy woman who's stuck in the flower-power era and marches to the beat of her own drummer, which alienates her conservative daughter. Keener is smart and experienced enough as an actress to not make her Diane an uptight shrew, but a woman who's grown up faster than her mother. This obviously won't be a giant step forward in Olsen's career like "Martha Marcy May Marlene," but she continues to show her versatility and intelligence as a young thespian.

A deeper and more memorable film could have been made with this material and these performers, but you can't always get what you want. Not every film has to pack a punch, and "Peace, Love & Misunderstanding" is a fine example of that. It's comfort food, but affable and surprisingly low-key comfort food.