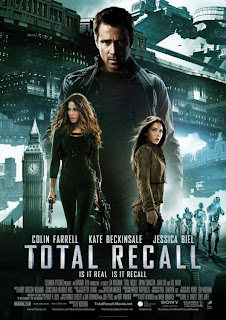 Hollywood tends to cannibalize itself, recycling once-original deas and churning out hollow, varnished products. Case in point: "Total Recall," a slick, expensive-looking remake that's totally generic and inferior to its originator, Paul Verhoeven's campy, enjoyably strange 1990 sci-thriller. Apparently, it more closely adheres to Philip K. Dick's short story "We Can Remember It for You Wholesale" by not taking a trip to Mars, but any trace of substance or interest is diminished and replaced with kinetic, repetitive chases, cannonade, and hand-to-hand combat. What's there to care about when the audience is kept at arm's length?

Again, in the future of 2084, Earth is uninhabitable after suffering global chemical warfare. The planet has been divided into the United Federation of Britain, which is suffering anarchic bombings, and The Colony, which was formerly Australia. Here, the Have-Nots aren't mutants but the 99 percenters that commute to work via a transportation system called The Fall. One blue-collar worker, Doug Quaid (Colin Farrell), keeps having bad dreams, waking up in the squalid Colony with his loving wife Lori (Kate Beckinsale), who actually has a job and doesn't just aerobicise. Then Doug decides to try Rekall, a corporation that implants artificial memories of more exciting lives. He decides on the "secret agent," but it turns out he may already be a spy that's been living a fake life.

Director Len Wiseman, responsible for the first two "Underworld" movies, doesn't copy Verhoeven's version verbatim, but doesn't deviate much from a mindless Jason Bourne actioner, either. The set-up is generally still the same, with numerous callbacks to the original (yes, the three-breasted prostitute opens her coat). Establishing a few clever tweaks to its setting, "Total Recall" then opts for such tedious action-overkill that the screenplay, by Kurt Wimmer and Mark Bomback, feels like a waste. The set-piece, where Lori turns on Doug and tries killing him, is at least choreographed with skill, especially on the part of Beckinsale, as are the hovercraft and elevator sequences. And Wiseman makes sure he one-ups J.J. Abrams with a lens flare in numerous frames. But how many times can you really watch rooftop chases, gunfire, and explosions without it growing numbing?

Patrick Tatopoulus' dystopian production design is visionary and obviously influenced by "Blade Runner" and "Minority Report" (also based on two other Philip K. Dick stories) with the sleek, rainy cross-cultural metropolis. (And the police robots look like the robots in "I, Robot" and the stormtroopers in "Star Wars.") Beyond the film's look, there's no real emotional connection to anyone or any real tension to Doug racing the clock. Colin Farrell, though a better actor than Arnie, isn't really asked to spout off cheesy one-liners. Instead, his Doug becomes so indestructible that he loses our rooting interest. Only does the character get time to breathe when realizing his talent for playing the piano in what's probably the film's most quiet scene. Though just as indestructible as Doug, the fierce Beckinsale (Wiseman's real-life wife) is more fun to watch as his fake wife Lori, showing her physical readiness in the Sharon Stone role. Jessica Biel, taking over for Rachel Ticotin's hooker-with-a-heart-of-gold Melina, gets to duke it out with her female co-star, but she's just bland window dressing. Bryan Cranston and Bill Nighy have so little to do, as the UFB's chancellor and a rebel leader, that they might as well be wearing paper bags over their heads.

Sometimes, you just want a big, greasy cheeseburger with no nutritional value whatsoever. But, for 2012's "Total Recall" to be even that, it would've needed to be weirder, more fun and more exciting by showing us something we've never seen before. Even if the Arnold Schwarzenegger-starring version wasn't all cerebral science fiction, it was great fun with intriguing ideas and inventive effects for the '90s. Verhoeven stylized his vision with a mean, over-the-top tone and supplied his star with quips, whereas Wiseman takes it all pretty seriously with a glum ordinariness. The world didn't really need a "Total Recall" redux, especially one that is antiseptic and soulless. So why watch a 2.0 copy that erases itself from your memory as you watch it when there's already a more memorable version at your disposal?