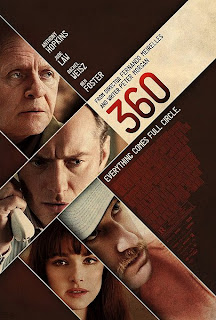 Besides entertaining, most films have something to say. If that statement isn't obvious already, then the film "360" will be groundbreaking cinema to the less discerning viewer. Directed by Fernando Meirelles (2005's "City of God") and written by Peter Morgan (2006's "The Queen"), the film is supposed to be a profound look at international interconnectedness, or the "unbroken chain of forks in the road." But between "Crash," "Babel," and "Crossing Over," we've been on this it's-a-small-world-after-all carousel before. "360" tries to explore heavy themes within a similarly jumbled structure, but it's a case of so many characters, so little substance.

Starting in Vienna, a Slovakian woman named Mirka (Lucia Siposová) poses for pictures on an escorting website. Her one client, British businessman Michael (Jude Law), is a no-show, while his magazine-editing wife Rose (Rachel Weisz) is already sleeping with Brazilian photographer Rui (Juliano Cazzaré), whose girlfriend Laura (Maria Flor) has known about the affair and has just left him. Hopping onto a plane back home to Brazil, Laura has friendly conversation with a nice older man (Anthony Hopkins), who's looking for his missing daughter, and then later during a layover in an airport, she fancies a sex offender (Ben Foster), who's recently out on parole. Oh, and we musn't forget the lovely alcoholic named Valentina (Dinara Drukarova) who's unfulfilled with her Russian husband Sergei (Vladimir Vdovichenkov), a gangster's driver, but pines after her Muslim dentist boss. Copy all that?

Just because these stories are connected doesn't automatically make "360" interesting. Haphazardly passing the baton to the next person, the underdeveloped characters don't feel so much like real people as they do names on a story web. They keep bumping into one another, but it's purely based on coincidence or unbelievable, often just plain stupid motivations. For instance, within minutes of a young woman meeting a man, she invites him up to her hotel room to drink, unaware that he's just been released from prison. Yes, she's vulnerable, but does that mean she has to abandon all common sense?

Like the title suggests, "360" goes in one big circle, introducing its most involving thread at the beginning and taking it in a different direction at the end. Still, none of the stories lead anywhere important. It's a relief that all of the high-profile actors turn in fine performances. Even if Hopkins isn't given much of a character to play, he makes one scene more heartbreaking than it has a right to be. Also, the technical aspects are top-notch (Adriano Goldman's cinematography is especially sharp, making use of split screens). Otherwise, "360" just feels pointless like it can't justify its own existence.