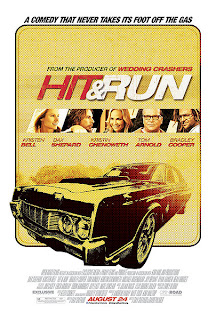 Chemistry is not always easy to obtain when on-screen leads have to fake it. That sometimes goes for real-life couples as well, but Dax Shepard and his on- and off-screen significant other Kristen Bell aren't faking it. As it turns out, they ignite a buttload of chemistry in "Hit & Run," writer-director-actor Shepard's pet project (and second feature with co-director David Palmer, following 2010's "Brother's Justice"). And for a movie released during the dog days of August, this little romantic chase comedy really is more fun than it looks and not all that bad, despite low expectations from the terribly junky trailers that might have left audiences jaded.

Charlie Bronson (Shepard) has been living a quiet, simple life in a rural California town with his girlfriend Annie (Bell). He's in the Witness Protection Program for being a getaway driver in armed robberies, unbeknownst to his main squeeze, and stays put in their country home, while she's a college professor with a doctorate in nonviolent conflict resolution. When Annie receives an ultimatum from her boss (Kristin Chenoweth) one morning—she can go to an interview in L.A. for the opportunity to head her own academic department or be fired from the underwhelming job she has now—Charlie takes the risk to leave and get her to that interview in his customized 1967 Lincoln Continental. Of course, Charlie's past comes back on the trip, as a few different groups are on their tail: Charlie's inept witness protection guardian Randy (Tom Arnold); Annie's smarmy, obsessive ex-boyfriend Gil (Michael Rosenbaum); Gil's gay cop brother Terry (Jess Rowland) who just wants to find a hookup via his cell's detection app; and Charlie's ex-crime cohorts (Bradley Cooper, Shepard's "Parenthood" fiancée Joy Bryant, and Bell's former "Veronica Mars" co-star Ryan Hansen).

When Shepard and Bell are together, one can just feel the love. In only the opening scene, Charlie and Annie engage in some playful teasing, verbal relaxation, and innocent face-slapping while snuggling in bed under the covers. It's such an adorably intimate moment, and from there, we believe them as a couple and as individual people. Even when Charlie keeps the truth of his past from Annie (including his birth moniker, Yul Perkins), he's honest with her and she doesn't turn into an unreasonably whiny ninny. Before all chaos breaks out on their car ride, these two actually have some interesting, smartly written conversations regarding nasty, political incorrect words like "fag" and "the N-word," which don't feel tacked-on since Annie specializes in nonviolence. Their relationship feels so natural and sweet that it's easy to turn a blind eye to the film's problems.

If Charlie and Annie are readily appealing and endearing, the same can't quite be said for the rest of the lot. When Arnold's Randy first shows up, he is such a putz. While driving his mini-van, he spills a cup of coffee all over himself, jumps out and forgets to put it in park, ends up running after his runaway vehicle, and takes out his gun, only to accidentally shoot through the windows of a family home. Very few of Randy's bumbling scenes are funny because Arnold (did he owe Shepard a favor?) is so cartoonishly broad and tiresome, and it's head-scratching how this hapless guy could be trusted with a firearm, let alone be a marshal, and act so irresponsibly stupid. But, as payback-seeking Alex Dimitri, a dreadlocked Cooper is good at playing despicable and actually underplays it. Also, in all of her two scenes, Chenoweth enjoyably plays Annie's pill-popping college administrator. Lastly, there is a rib-tickling surprise cameo during the first half of the closing credits.

Even if the romantic element clicks, the rest is hit-and-usually-miss (Alex's rant of his own prison rape goes on ridiculously long). Co-directors Shepard and Parker add a few amusingly goofy, off-kilter touches, most memorably a gas of a slo-mo sequence where Charlie one-ups Gil in a tire burnout and doughnut contest that's cued to "Pure Imagination." The sight gag(s) of characters walking into the wrong motel room of naked, saggy octogenarians is easy but funny and surprising. However, one of the low points comes early when the animal-loving Alex wraps a dog leash around an African American man, drags him down an alleyway and force-feeds him dog food with a gun to his head, and then steals the man's canine best friend. In spite of the gag's daring, it's just mean and unfunny, so what were the filmmakers thinking? And yet, the movie bounces back every time it gets back to Shepard and Bell.

To steer gearhead viewers away from potential lawsuits, "Hit & Run" is not a summertime actioner jumping on the bandwagon of "The Fast and the Furious." No, the pacing is shaggy, and the low-budget chases are well-shot but merely competent. The filmmakers' choice to shoot in a jittery handheld style also points to a "Smokey and the Bandit"-type indie, rather than a slick, high-velocity blockbuster, calling back the '70s drive-in heyday. It's all pretty slapdash, too, when it comes to settling on a tone and throwing in some madcap asides, but a good-times vibe of Shepard making a movie with his buds and his lady luckily rubs off on those watching. Loose and lightweight, "Hit & Run" is just a late-summer throwaway trifle, but it's more diverting than not, so that's something.