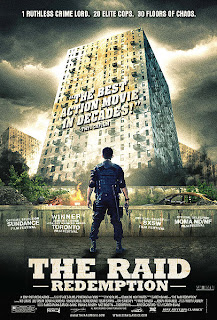 "The Raid: Redemption" is an action movie done right, but that's about it. It's a non-stop, in-your-face, balls-to-the-wall rush of martial arts fighting, shoot-outs, and other bloody, bone-crunching violence all the time. Written and directed by Gareth Huw Evans (2009's "Merantau"), this unapologetically brutal, over-the-top, and consistently dynamic Indonesian ass-kicker is what it is and restores the creatively flagging genre by being effective at what it wants to be. Audiences with tender tastes will be worn down, but sensation seekers will feel right at home.

The no-frills premise is as simple as a game of pick-up sticks. An elite SWAT team of 20 men is assigned to take down a ruthless drug lord named Tama (Ray Sahetaphy) in his 30-story apartment building located in the Jakarta slums. Tama already expects the arrival of these unwelcome visitors, so once the squad actually enters the building, he invites the residents in his building to kill off the "infestation" as he watches from surveillance monitors on the top floor. Rookie Rama, played by resourceful martial artist Iko Uwais, quickly becomes the team-leader replacement, dodging whirring bullets and machetes through each chaotic floor without an easy escape route. Aside from Rama, character identification is nearly zero, as most of them are just kill-or-be-killed cogs in the machine. By default, we care about Rama because he has a pregnant wife at home, but he also shows a little more compassion than most toward the building's innocent or innocently drug-using civilians.

Since the bulk of "The Raid: Redemption" runs on a punch-kick-stab-repeat loop, its rhythm could have turned routine and mind-numbing. Luckily, the hand-to-hand fights (which are a form of Indonesia's pencak silat) are choreographed like brutally real ballet. Then, being shot by Matt Flannery and edited by Evans, the insanely elaborate stunts are given style and shape to kinetic, exhilarating effect without feeling same-y and repetitive. (A cool, pulsing techno score is also employed to accentuate the intense viscera.) In a way, the movie feels like a videogame with different levels, not only as the men make their way to the different floors but from the crazily inventive ways bodies are knocked off. There's fun with a grenade exploding inside of a refrigerator, plenty of machete play, body slamming against walls, someone jumping out of a window and using his enemy as a landing pillow, and a one-man killing machine named Mad Dog who doesn't bother with guns.

Given the wall-to-wall action, a script almost seems gratuitous. So, as expected, the writing is pretty basic, but Evans' pacing is so assured that it hardly matters. Also, every once and a while, the filmmakers give us enough time to breathe and throw in a couple surprising plot turns of betrayal on both sides of the law. Even during the downtime, there's a tense, mouth-covering moment where Rama and one of his injured men hide out in a false wall of a couple's apartment, only to quietly endure the blade of one of Tama's thugs. Otherwise, slow moments are few and it's back to the races.

Not so much high art as it is no-nonsense, high-gear entertainment, "The Raid: Redemption" still might be the most artfully relentless, ultra-violent film in recent memory. It's impressive stuff, but don't be surprised if you feel numb afterwards. Even Jackie Chan will be too exhausted to wonder if any bones were broken during the shoot.