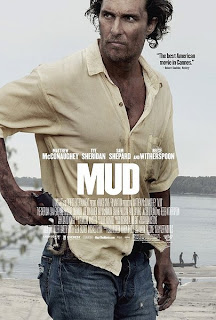 Since Matthew McConaughey has stopped straining to be likable (but came off smug and smarmy) with a renaissance of dark, slippery roles in "Bernie," "Magic Mike," "Killer Joe," and "The Paperboy," he has really formed into a star with genuine acting chops. Writer-director Jeff Nichols follows up his second feature, 2011's unsettling "Take Shelter," with "Mud," a film that further displays the filmmaker's excitingly unique voice. Influences by Mark Twain's "The Adventures of Huckleberry Finn" mesh so well into this stirring and lyrical Southern backwoods coming-of-age yarn, which comes off as a Great American Novel itself and Nichols' most accessible and heartfelt piece of work.

In Arkansas, 14-year-old Ellis (Tye Sheridan) lives on the riverbanks in a houseboat with his drifting parents, Mary Lee (Sarah Paulson) and Senior (Ray McKinnon), who are on the verge of separation and losing the river life. One early morning, he sneaks out with his pal, Neckbone (Jacob Lofland), and they take a boat out to a small, tucked-away island on the Mississippi River. They scout the land to find a motorboat stuck in a tree, washed away there from a flood, and are about to claim it, until it seems to be occupied by a swamp rat named Mud (McConaughey). This enigma has been living on the island until he can meet up with his beautiful childhood love Juniper (Reese Witherspoon), who's staying at a motel in town. On the run from those who want him dead, Mud plans to fix up the abandoned boat and escape with the love of his life. Meanwhile, as the boys keep returning to the island with food and help this lone wolf deliver letters to Juniper, Ellis has his eyes set on a high school girl named May Pearl (Bonnie Sturdivant). Will both men, young and old, experience their own heartbreak?

In what will either intoxicate or frustrate audiences, "Mud" takes its sweet time telling its story at its own deliberate, laconic pace, flowing like the river. Without turning his setting into a place of dim, over-the-top yokels, Nichols captures such a sense of place with authenticity and subtle details, from the humidity to the Piggly Wiggly grocery store, courtesy of Adam Stone's luminously textured cinematography and Richard A. Wright's naturalistic production design. The nuanced, moving screenplay bottles themes of pain, loss, redemption, and disappointment when one is in love. (There's even the thematically relevant use of The Beach Boys' "Help Me Rhonda.") In a moment that drives home the film's points and makes sense of the young protagonist who sees his parents stop loving each other, Juniper asks Ellis why he's helping them out and he replies, "Because you love each other." By the time Ellis becomes chivalrous and fights for his girl, he's maturing into adulthood but still learning the hardships of love.

Every performance feels unaffected and lived-in. With grime working in his favor lately but still coming off charismatic, McConaughey turns in another compelling, understated gem of a performance as the title character Mud. He may be dangerous, in trouble for a crime he committed and exchanging his .45 pistol to Neckbone for the motorboat, but Mud is also vulnerable, living on an island by himself and relying on two teenage boys, still holding onto superstitions, and being hunted by a clan of bounty hunters. Co-starring as the youngest of Brad Pitt's sons in "The Tree of Life," Sheridan is now front and center as Ellis. Endearing, relatable, and vulnerable, the 16-year-old actor is a true find. Newcomer Lofland, an Arkansan himself, is also a natural as the mouthy Neckbone, almost reminding of one of the boys in "Stand by Me." Cast against type and somewhat unglamorous (but still glamorous), Witherspoon is raw as the bruised, troubled Juniper who's kept intentionally underdeveloped to not live up to Mud's perfect perception of her. Sam Shepard, Michael Shannon, and Joe Don Baker also populate the proceedings as Ellis' cranky, mysterious neighbor, Neckbone's easygoing oyster-diving uncle, and the patriarch of Mud's hunters, respectively.

Even when "Mud" shifts from coming-of-ager to boyish adventure and finally a thriller, it feels confidently woven. There is the climactic shoot-out, following the old "Chekhov's Gun" metaphor, that if a gun is shown in the first act then it will surely be fired in the third act, but it never ceases feeling like a literary journey. What remains balanced and true is a sad but compassionate and hopeful heart underneath all that grit and mud.