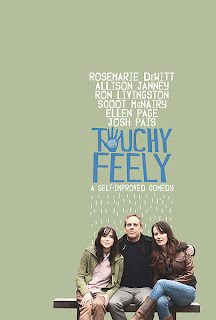 The Duplass brothers and Joe Swanberg aren't the only ones traveling outside of the "mumblecore" world while still keeping alive their kind of observational, character-driven, improv-heavy films. Also proving her confidence as a DIY filmmaker who gives just enough material and even more freedom to her actors is writer-director Lynn Shelton, who makes what might be her first ensemble piece (her previous films, 2009's "Humpday" and 2012's "Your Sister's Sister," mainly juggled three characters). Tiny in scale with a lived-in feel, "Touchy Feely" has interesting ideas, flawed characters, and very fine actors, but never quite gels into a worthwhile whole.

Abby (Rosemarie DeWitt) is a Seattle-based New Age massage therapist in a relationship with bike owner Jesse (Scoot McNairy). Living in the house they grew up in, Abby's introverted brother Paul (Josh Pais) runs their late father's dental practice, a business that is not booming, and his daughter Jenny (Ellen Page) works there as a hygienist. Triggered by Jesse asking her to move in with him, Abby develops a sudden aversion to human touch. (And no wonder she's repulsed, as Shelton gives us plenty of epidermal close-ups.) As Abby finds an operational hazard in her own profession, Paul becomes a curer for his patients with TMJ and, by word of mouth, starts getting more business and making people happy.

"Touchy Feely" is in an odd position. Perhaps because it's more scripted rather than 85% improvised, Shelton's latest feels like a real movie that pushes and pulls its characters around a plot and trades rushed montages for development. Little to no fault can be given to the performances, however. The perpetually lovely and intuitive DeWitt grounds everything she does with her earthy warmth and relatable presence, but Abby is made to do a lot of moping around instead of taking charge before she takes an LSD tablet that apparently cures everything. Pais is one of those actors who's been seen working in film and TV for a while but has never been given that one role. Here, as the standoffish Paul, the offbeat performer is awkwardly amusing and gently affecting. McNairy is such a watchable up-and-comer but gets little more to play than the scruffy, supportive boyfriend, and Page has tender moments, even in a weakly formed part as Jenny. As Abby's friend, Reiki therapist Bronwyn, Allison Janney is more subdued than her usual self and does wonderful work, but her cursory character really goes nowhere except off-screen. Ron Livingston (DeWitt's real-life husband) fits in here somewhere as Abby's first love, not entering the story until midstream.

Though it's nicely acted and moves along at a tight, natural clip, "Touchy Feely" is too uneven and thinly written when it should add up to more than an insignificant dramedy. Shelton might demonstrate how messy real life can be with a naturalistic approach in her films, but here, the happy resolution she winds up with feels unearned and not terribly satisfying, letting almost everyone off the hook too easily. It's a pity Shelton doesn't deepen her characters and their relationships with one another or follow through with her main hook in any interesting or meaningful way because all the skill and talent were there. Hopefully Shelton hasn't lost her touch already.