Riddickulous Planet: "Riddick" bores rather than amuses or thrills 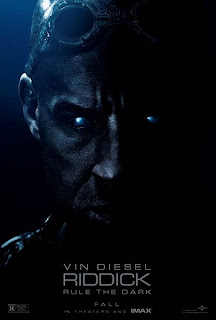 Before Vin Diesel sold his soul to now-seven "Fast and the Furious" movies, he probably had no idea at the time that his Richard B. Riddick character in 2000's "Pitch Black" would spawn his own franchise. Made on a modest $23-million budget thirteen years ago, that cool, no-frills sci-fi horror pic became a sleeper hit once it hit home video. Then, someone hopefully got their wish for more Riddick with 2004's "The Chronicles of Riddick," which was overpriced, joylessly interminable gobbledygook that drowned itself in convoluted Necromonger exposition and bombastic CGI, all while wasting Judi Dench and blocking her in front of green screens. Ready or not, here we are with the succinctly titled "Riddick," the lackluster third chapter in this franchise that no one other than diehard fans was clamoring for, but at least it throws out the overblown artificiality of its predecessor and goes back to the gritty, dusty look (and gristle-loaded R-rating) of the first film.

Writer-director David Twohy returns, showing he has faith in these movies, and, with co-writers Oliver Butcher and Stephen Cornwell, sensibly strips down the narrative of its "Chronicles" mythology to the "Pitch Black" roots. When we first find night vision goggle-wearing Riddick (Diesel), he's marooned on a desert planet full of vicious, carnivorous zebra-dingo hybrids and scorpion-like creatures in the caves' waters. After mending his broken leg, making himself immune to the creatures' venom and taming one of those adorable zebra-dingo puppies to bring along with him as his companion, Riddick finds himself at an abandoned bounty hunter outpost, where he activates the tracer beacon to reveal his presence to the incoming mercenaries. The team, led by the sadistic Santana (Jordi Mollà), arrives and is soon joined by a second team with commander Boss Johns (Matt Nable) who wants Riddick dead for personal reasons. But are they hunting Riddick or is Riddick hunting them? It barely matters that the godforsaken planet's creatures arrive once the lights go out.

When it's not relying on Diesel's monotone voice-over and goofy flashbacks (can you spot Karl Urban and his campy hair?), the first act gets off to a relatively interesting start, employing visual storytelling with little dialogue and focusing on Riddick and his space puppy. From there, the next hour is mostly plodding downtime and wheel-spinning with leaden wisecracks and characters being held at gunpoint. All the film ever had to do was deliver some down-and-dirty fun and move at a tight pace, and while it has moments of the former (i.e. creature eviscerations and an awesomely grisly bit with a "head in a box"), the viewer may just want to scream, "Get on with it already!" With nobody to really root for (except for the CG'd dingo) and nothing to latch onto, "Riddick" has enough sense to not take itself so seriously but offers hardly anything else to recommend it. Even sci-fi production design and special effects have seen better days.

Playing the menacing Riddick for the third time, Diesel has a commanding presence and a sense of humor to go with that gravelly voice, but there's not much more to the enigmatic Riddick than his growl, sweaty biceps, and skill to kill. Don't expect much more character development from anyone else, either. The grating, bickering Johnny One-Notes in the merc group are distinguished by one (WWE graduate Dave Bautista) being a softy when it comes to sniping an animal; another (Nolan Gerard Funk) spouting religious prayers; and then there's the token tough female who's also the token tough lesbian (Katee Sackhoff). Finally, as Santana, Mollà is completely smarmy and despicable that the character can't meet his demise soon enough.

"Riddick" is the type of cheesy schlock you'd expect to see premiering on the Syfy channel, not in nationwide multiplexes where one pays $12 a ticket, but it doesn't even muster up enough so-bad-it's-good appeal for Mike and the Bots to heckle on "Mystery Science Theater 3000." By the end, the pic just elicits a shrug of indifference. One shudders to think that if "The Fast and the Furious" is a bellwether for Vin Diesel's career, there will be three more movies with Dick B. Riddick.