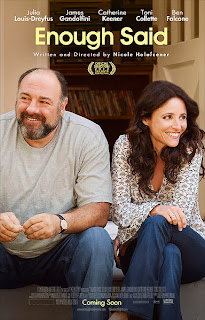 The majority of praise Nicole Holofcener's romantic comedy "Enough Said" is receiving essentially falls on it featuring the late James Gandolfini's penultimate performance on screen. One can ponder the notion that if Gandolfini were still alive, would the film still have such a poignant impact? The answer is yes, due in no small part to Holofcener's knack for smart, honestly observed slices of life with richly drawn characters that could fall into well-to-do, navel-gazing types but never do, sharp-witted dialogue that never feels precious or less than natural, and having an eloquent, low-key hand behind the camera. Beguiling, funny, and generous, "Enough Said" is yet another winner in the writer-director's filmography and will surely make moviegoers mourn the loss of such a teddy bear of a talent even more.

Eva (Julia Louis-Dreyfus) is a divorced masseuse, living in L.A. with her Sarah Lawrence College-bound daughter Ellen (a natural Tracey Fairaway). Accompanying her married friends Sarah (Toni Collette) and Will (Ben Falcone) to an upper-class poolside party one night, she first meets a poet named Marianne (Catherine Keener) and gets another client out of their meeting. Next, Eva is introduced to Albert (Gandolfini), a big tree trunk of a man, and a couple days later, they're on a date. She initially isn't attracted to him, but the conversation flows and the laughs come easy. They also have something in common: they're both divorced and both dreading empty nest syndrome, as Albert also has a daughter, Tess (Eve Hewson), about to go off to college. ("I guess we should develop hobbies," says Eva. "Actually, I weave…yeah, I do it in the garage," Albert jokes.) When Eva begins having sessions with the Marianne at her euphorically decorated home in Santa Monica, the two become friends, sharing stories of their ex-husbands. Then, just as Eva is cozying up to Albert and finding him sexy more and more, she puts it together that Marianne's ex-husband is, you guessed it, Albert. But with Marianne in her head, Eva hopes every little flaw she's learned from her new client doesn't poison her perception of Albert. Aside from the middle-aged romance, the film also threads in the pending emotions Eva and Albert both suffer from having to see their daughters fly the coop, as well as Ellen's friend Chloe (Tavi Gevinson), who, without any mean ulterior motives, turns a little needy and starts spending more time with Eva without Ellen even being there. Understandably, Ellen is a little taken aback when Chloe gets to meet Albert before her and even has breakfast with her mom and new boyfriend.

As with 2001's "Lovely & Amazing," 2006's "Friends with Money," 2010's "Please Give," and now "Enough Said," what Holofcener does is tricky, refusing to compromise her characters or push them around an artificially contrived farce, nor does she lose compassion or coddle them. Unlike Nancy Meyers, who showers her characters with mouth-watering, upper-crust digs and simple solutions, she resists putting a neat button on things, too. Holofcener actually takes her time to develop her characters' relationships before spilling the propellant plot hook on us. It could be straight out of "Three's Company" or any shticky, eye-rollingly forced sitcom reject, but the writer-director doesn't push hard to earn big, wacky laughs, instead allowing uncomfortable humor to flow in on its own and come from a more human place. As it plays out, the fact that Eva's new love interest is Marianne's ex-husband feels more like a coincidence than a screenwriter's construct. Is it a conflict that could be solved in a matter of minutes? Yes, but Eva is in a sticky spot, curious to know Albert's flaws before experiencing them for herself without ruining what she already has with him. The characters feel like people, not just cogs in the plot, and that's how it should be.

Finally given the chance to lead a feature film after her years of TV work on "Seinfeld," "The New Adventures of Old Christine," and now "Veep," Louis-Dreyfus is enormously engaging and terrifically handles the fleshed-out role of Eva with unassuming grace and her infectiously expressive comic face and laugh. It's a testament to her skills as a comedic and dramatic actress that even as she throws some digs at Albert and fails to acknowledge the truth of her relationships to both Marianne and Albert to their faces, she remains appealing and sympathetic. The recurring montages of Eva's massaging sessions with her three other clients—a man with bad breath, a woman who complains Eva's ear off about her first-world problems, and a twentysomething guy who just stands at the top of his steep staircase as Eva struggles to carry up her heavy massage table—are memorably amusing without mugging or slapstick. In a dumber movie, Eva would have left her smarts by the wayside and behaved like a dippy, overly neurotic nincompoop, but not on this filmmaker's watch.

Of course, the main draw is Gandolfini's posthumous lead performance. Though having always shown shadings and a sweet side in his many indelible supporting roles and persona as Tony Soprano, the role of Albert happens to be his rarest opportunity with a gentle, tender, and self-deprecating turn. He's a sweet, comfortable guy with his own quirks, a few that separately involve bedside tables, guacamole, and whispering in a movie theater. His job as a TV archival historian is also slyly knowing in that both actors jumpstarted their careers on two of the most culturally important TV series. If Gandolfini had to go, and it's heartbreaking to watch him up there, this may be the sweetest swan song. These two fiftysomethings are a delight together, sharing interesting, funny give-and-take that never rings false and an easy, genuine chemistry that is as watchably romantic as watching two teenagers fall in love for the first time. After talking about feet, their first kiss on Albert's back stoop is so adorable and lovely.

Also, it wouldn't be a Nicole Holofcener film without the bristly presence of Keener, whose Marianne isn't the most pleasant or easygoing person but feels deeply lonely, too. Collette (sporting her native Australian accent for once) and Falcone, as Eva's therapist friend and her husband, are held on the periphery but still have likable, flesh-and-blood parts to play. They experience household problems of the rich and white variety, including rearranging furniture and deciding on whether or not to fire the maid who keeps placing odd objects in the kitchen drawers, two situations which may not be the most relatable but are humorously played without a heavy hand.

A romantic comedy about imperfect, identifiable grown-ups? What a concept. "Enough Said" isn't revolutionary filmmaking; it's simple and doesn't have a particularly new story to weave but it's in the perceptive, true, and entertaining way it's told and acted that makes it so dear. It's that rare kind of film you want to embrace — enough said.