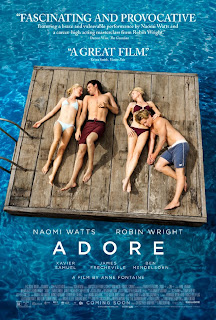 Titled "Two Mothers" when it premiered at the 2013 Sundance Film Festival, "Adore" seems to want to break taboos and say something about the young-old mentality when you're a woman in your 40s. Based on the book "The Grandmothers" by Doris Lessing, adapted for the screen by screenwriter Christopher Hampton ("Atonement") and director Anne Fontaine (this being her first English-language film), the film mostly adds up to a May-December sudser shot with the utmost tastefulness and a sun-baked glow, but it's classed up by the performances of Naomi Watts and Robin Wright.

Both living on the coast of New South Wales, Australia, Lil (Watts) and Roz (Wright) have been friends since childhood, where they would romp along the sandy shore and swim to a wooden raft. They're still very close in their 40s, each with a strapping, good-looking son in his early 20s, Lil's son Ian (Xavier Samuel) and Roz's son Tom (James Frecheville) being best friends as well and riding the waves together. Lil lost her husband when Ian was just a boy but old enough to remember, and now, the four of them spend so much time together in their nearby beach houses, it's like they're one big, happy family. As soon as Roz's drama-teaching husband Harold (Ben Mendelsohn) goes away for a couple of weeks to Sydney University, she has a sexual encounter with Ian—yes, Lil's son. Before you know it, two can play at that game when Tom witnesses his mother leaving Ian's bedroom late at night and, initially out of spite, starts having a fling with Lil, who's quite hesitant at first. The heart wants what the heart wants, but is this just a phase? Lasting two years, these affairs could cause much more damage than any of them could imagine.

Given that trashy romance novel of a summary, "Adore" would seem right at home on Lifetime or Cinemax After Dark, and might have a tinge of ickiness and first-world problem syndrome. When the film seems headed for door-slamming French farce, director Fontaine makes the bold choice of not pitching such material in a melodramatic key, at least until later when truths are later revealed to the sons' new wives. A film about two fathers swapping daughters would have crossed the line into pedophilia, but how this cross-generational swapping is handled is actually more tasteful than that, then sometimes comes off too casual and low-key to a fault.

It might have been far more believable had just one mother engaged in her scandalous affair, or had Lil and Roz taken their own relationship to the next level (they even joke about being "lezzos" early on), or even Ian and Tom. Rather, the son-swapping sexy time feels like the stuff of a Greek tragedy mixed with steamy excerpts from a late-night skin flick. With all that said, one can instantly buy into the relationship of Lil and Roz. Not hurting matters is that Watts and Wright's performances are so persuasive and rich, as they peer into these two women and allow the audience a way into their vulnerabilities and motivations behind why they'd each take such unacceptable risks. On the other hand, Samuel and Frecheville merely fulfill their obligations as their sons, perpetually surfing (and shirtless) adonises. Does Ian's loss of his father at a young age give him an appetite for his mother's closest friend who's been like a second mother to him? The screenplay never offers much insight into what either of these boys are thinking, except that they're lustful for older women who happen to be the other's mother.

Lushly photographed by Christophe Beaucarne who makes Australia look like a picturesque tropical paradise and does its attractive foursome favors all around, the film is never not pretty to look at. Screenwriter Hampton gets all the credit for the dialogue, so despite Wright and Watts' sincere delivery, what comes out of their mouths isn't always elegantly natural, several of their dialogue exchanges too blunt and on-the-nose. Still, alternately sexy and icky, "Adore" is like a tawdry beach read that you're guilty of investing your time into but compels you anyway.