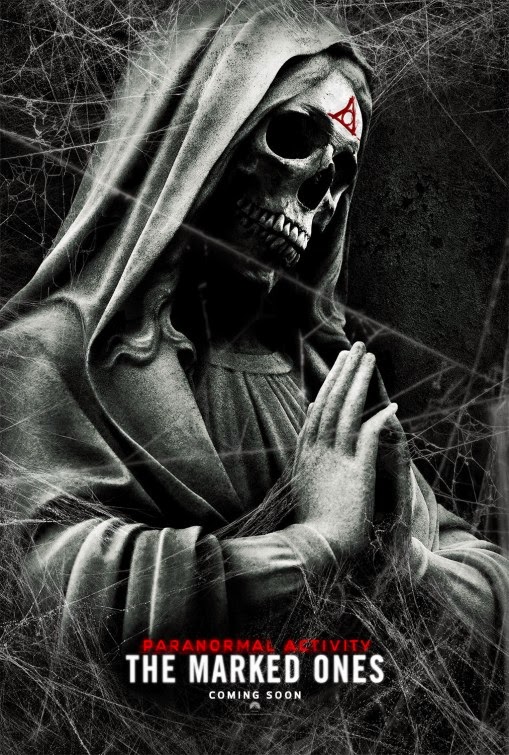 Relocating from the suburbs in California and Nevada to the more-urban, working-class Oxnard, California, "Paranormal Activity: The Marked Ones" takes off in 2012 as our new hero, 18-year-old Jesse (Andrew Jacobs), has just graduated from high school and his chatty best buddy Hector (Jorge Diaz) shoots everything on a new digital video camera here on out. With his older sister, father, and tequila-drinking abuela (Renee Victor), Jesse lives in a Hispanic community apartment building, where he, Hector, and their other friend, Marisol (Gabrielle Walsh), are convinced Anna (Gloria Sandoval), the weird lady downstairs, is a bruja (witch). During the night, moans and screams can be heard through the vent from Anna's apartment and they even catch her doing some odd ritual in the nude. Things can only get worse when strange-acting valedictorian Oscar (Carlos Pratts) goes missing after Anna is killed. Soon, Jesse wakes up with a bite mark on his arm with the abilities to throw gangbangers through the air like a superhero, but the "good" naturally comes with the "bad."

Having written the previous three movies, writer-director Christopher Landon (2010's "Burning Palms") takes the helm and earns good will almost immediately from establishing likable, appealing characters, especially Diaz's charismatic Hector, in a welcome milieu without mishandling them as stereotypes or caricatures. The pre-adult and ethnic diversity change up things ever so slightly that "Paranormal Activity: The Marked Ones" takes on a teen-sleuth and urban slice-of-life vibe. Jesse's happy-go-lucky powers also have an amusing, happy-go-lucky tone like the early-going of found-footage cousin "Chronicle." Then Landon treats his audience to some spooky fun, planting some decent pop-out jolts with a trap door in Anna's crime-scene apartment and Jesse's grandmother performing a cleanse with blood eggs she received from the secret room of a bodega. The scare beats are expected, but the camera placement, the timing of dark figures appearing behind our heroes, and the answers on a Ouija board-like "Simon" game are still creepily effective.

As with any found-footage movie, the viewer must get over all the humps of disbelief. No matter what, Jesse and Hector point and shoot everything. We know that Jesse shouldn't take a girl he meets at a party to hook up with her in the digs of his dead neighbor, but he will. We know Jesse shouldn't follow his barking chihuahua into the dead neighbor's house and down through the trap door, but he will. Maybe they figure their footage and dumb decisions will make a good horror movie when it's all over, even if they don't live to see the finished product, but these are small prices to pay in logic in order to have a movie. This time, nobody sets up cameras around the house as surveillance or on an oscillating fan. Justified reason or not, the wobbly camera is there and we get to follow along, so be sure to swallow your Dramamine beforehand.

Admirably more wicked and even disturbing in spots, "Paranormal Activity: The Marked Ones" doesn't really tell us anything we didn't already know in the canon mythology, but if the series seemed to be on its last leg, this one reinvigorates it a bit with a Latino flavor and a nutso third-act direction. As was the case of the last few movies, it all comes down to a carefully paced, nerve-rattling finale set in and around a house at night. Before a cut-to-black letdown, things take a chancy, anything-goes zig that will even be seen as mind-bendingly sloppy and desperate in finding a way to interweave the alchemic hauntings of the original. Like the "Saw" franchise, these movies rely on a complicated continuity that never seems finished in every one-and-done movie, but at least somebody's trying. It's no longer a surprise that the first movie to christen the new year is a horror movie—2012 was "The Devil Inside" and 2013 was "Texas Chainsaw"—but this reliably fun little morsel of teenage humor and demon-worshipping dread should keep completists satisfied until the real "5" rolls around. And when it does, it has a lot of explaining to do.