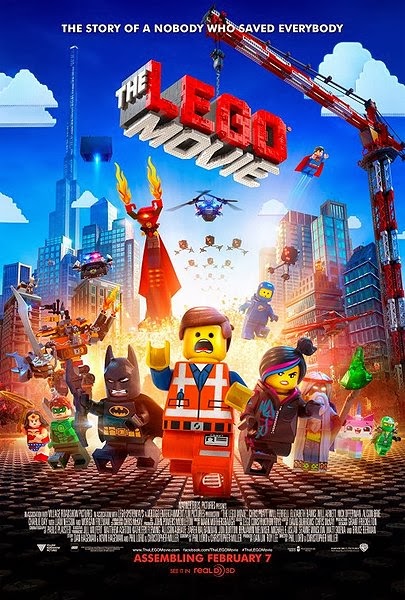 It comes as no surprise that "The LEGO Movie" is marketed for children, what with all the bright colors and being built around a universe made of plastic toy pieces. The kiddies will be in awe, squealing and forcing their parents to buy more LEGO sets after the show is over. To glorious surprise, though, writer-directors Phil Lord and Christopher Miller—who are on a no-fluke winning streak after their previous and only two other films, 2009's "Cloudy with a Chance of Meatballs" and 2012's "21 Jump Street"—take another well-known property, the beloved LEGO® brand, and inject their quick-witted sensibilities, while transcending expectations of what could have just doubly been a source of harmless throwaway entertainment and a shameless corporate commercial. For different reasons, "The LEGO Movie" works on a deeper level for both kids and adults, embracing the power of imagination and creating a rewarding emotional center that parents will most likely appreciate the most.

Emmet Brickowski (voice of Chris Pratt) is a self-proclaimed "regular, normal, ordinary guy" who lives a content, routine life and abides by all the rules. He wakes up, buys his overpriced coffee, goes to work as a construction worker, and listens to the overplayed pop song, "Everything Is Awesome," on repeat until the day is over. No one in Bricksburg sees anything special in him, until Emmet meets Wyldstyle (Elizabeth Banks). She's a cool, punk-haired "Master Builder" who's caught by Emmet searching for a piece of red plastic, called the "Piece of Resistance," to stop the fascist President-turned-Lord Business (Will Ferrell) and his nefarious plan to end the world on "Taco Tuesday" with the Kragle device. Wyldstyle thinks Emmet could be "The Special" she and the other "Master Builders" have been searching for to save them all, according to the prophecy of old mystic Vitruvius (Morgan Freeman). With President Business making a henchman out of the mercurial Good Cop/Bad Cop (Liam Neeson) to retrieve the crucial piece and maintain an orderly separation, Emmet might be the least qualified person to lead the rebellion, but he might have a few original thoughts in his plastic head after all.

The long-gestating brainchild of filmmakers Lord and Miller that finally came into lovingly impressive fruition, "The LEGO Movie" surprises over and over. Chock-full of rapid-fire visual jokes, iconic pop-culture characters (including but hardly limited to Superman, Green Lantern, Gandalf, Dumbledore, and Shaq), and one-liners of the all-ages variety, the film is a deliriously zippy and smartly goofy sensory overload at frenetic speed. The names of household weapons in President Business' relic collection, like the "Kragle" being a tube of "Krazy Glue" and an "X-Acto" knife being dubbed "The Sword of Exact-Zero," are outright amusing. There's the satirical running joke of Emmet's favorite TV show, the brainless sitcom "Where Are My Pants?" (which is like the mild version of "Ow! My Balls!" from 2006's Mike Judge-created "Idiocracy"). The computer animation looks extraordinary, with the intentionally jerky, clunky look of stop-motion lending a goofy nod to Wyldstyle's hair-tossing of her capped head and LEGO hand-holding, and packs in so many worlds, including the anarchic, rainbow-colored Cloud Cuckoo Land and a flowing ocean made of blue blocks. As the pace never flags, one viewing might not be enough to catch the endless wave of cute, inventive details and drink in all the sights.

All-star casting in animated features tend to take one out of the story, but every one in this blessed voice cast has been carefully chosen and their cumulative energy is ever contagious. Pratt endearingly provides the voice of everyman-turned-hero Emmet, whom you can't help but root for, and Banks is loaded with spunk as Wyldstyle who's never a damsel-in-distress. Ferrell ably blends megalomania and heart as Lord Business; Freeman gets to knowingly play on his God-like voice and provide laughs as the Yoda-wise Vitruvius; and Will Arnett has the Christian Bale growl down pat as Batman, Wyldstyle's brooding but cocky boyfriend. Also, Alison Brie's adorable turn as unicorn-kitten princess Unikitty is a gem; she's so full of cotton-candy fun and positivity in Cloud Cuckoo Land, but tries with all her might to keep her temper in check.

On the level of an adventure story, crammed with more cleverness and wit than most live-action features, the film is a complete blast. And then . . . there's a meta, daringly sophisticated story curveball—one that cautiously won't be given away—that should catch any viewer off guard, taking a turn into more thoughtful thematic territory. Is "The LEGO Movie" one for the ages? It is surely a groundbreaking achievement, but there is something so manic and chaotic about its flood of jokes, ideas, and colorful pieces, some of which will evaporate from your mind and then warrant an immediate second viewing. No matter, the film is such an inspired, rippingly funny good time and more unexpectedly audacious than it initially lets on, without alienating any generation. Basically, everything is awesome!