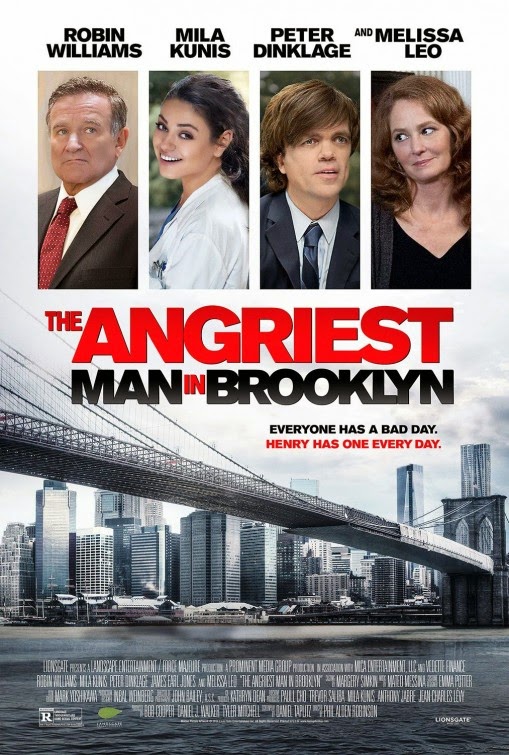 "The Angriest Man in Brooklyn" seems to exist only in wild extremes. One minute, it's a silly, farcical sitcom, and next, the phony drama demands tears. Either caustic, strenuous, or maudlin and never anything in between, this annoying, artificial screwball farce with dramatic and tragic undertones tries to waver every which way and strikes as too ineffective in all directions. There's nothing really wrong with the redemption story of a dying man making up for years of anger and regret, and walking a tonal tightrope can be done, but director Phil Alden Robinson (who, if you can remember, made 1989's "Field of Dreams" and 1992's "Sneakers") and screenwriter Daniel Taplitz, whose script is based on Assi Dayan's of a 1997 Israeli film "The 92 Minutes of Mr. Baum," must have gone tone-deaf by the results of this unmanageable misfire. And it even pulls a great cast down with it.

Henry Altmann (Robin Williams) is having a bad day. He's always in a fit of rage, but on one particular day, his car gets hit by a cab and then he gets into a fuming argument with the cab driver. At his doctor's appointment, the doctor (Louis C.K.) he usually sees is out, so a substitute, the young Dr. Sharon Gill (Mila Kunis), sees him. Sharon, who's having a bad day herself due to her beloved cat jumping out the window and resorts to pill-popping, breaks the news to Henry that he has a brain aneurysm. She gets tired of Henry yelling at her, so she makes up that his life expectancy is limited to 90 minutes. Having made a mess of his relationships with his brother Aaron (Peter Dinklage), his estranged wife Bette (Melissa Leo), and his son Tommy (Hamish Linklater) after his other son died, Henry decides to try and reconcile. Meanwhile, Sharon feels guilty, so she goes on a wild goose chase to find Henry and get him in for treatment.

If the terrific ensemble cast could make up for the uneven direction, it's not that any of them are slacking, but the performances are also oddly screechy and often confused. Robin Williams can certainly play a bitter asshole well, but every supposedly redemptive moment succeeding his unhinged anger doesn't feel the least bit earned. In fact, the fake 90 minutes Sharon has given Henry seems too long for a man this miserable when we don't really care what happens to him. We only see flashbacks of Henry as a good father, who used to support his son Tommy's interest in ballroom dancing but now doesn't since he lost his other son and Tommy wouldn't join Henry's law firm. Hamish Linklater shares a few sincere moments with Williams, having worked with him on CBS's "The Crazy Ones." Mila Kunis is spunky as Sharon, but begins to suffer with the unconvincing material. One can almost see the embarrassed look on the indefatigable Melissa Leo's face, as she gets nothing to work with that isn't stock. James Earl Jones (as a stuttering shopkeeper), Richard Kind (in a fat suit), and Isiah Whitlock Jr. also have bit roles, and Broadway darling Sutton Foster has a thankless role as Tommy's girlfriend. Out of anyone, it might be Peter Dinklage who emerges the most unscathed as Henry's calmer brother.

Everyone is trying hard and yet flailing hopelessly in "The Angriest Man in Brooklyn" that some breathing room might have improved things—maybe—but almost nothing works as it is. Is anyone supposed to feel like a real, functioning person? A novelistic, third-person voice-over narration device by both Williams and Kunis overstates everything the characters are thinking and feeling. The comedic moments go clunk, from wacky cab rides to Henry berating a foreign cabbie. The telling-us-to-feel-sad musical cues are cloying and manipulative, as if poignancy couldn't be drawn from the simplicity of the writing and performances. Henry Altmann should be grieving instead of being so angry because the one that ends up earning the reason to be angry is the viewer.