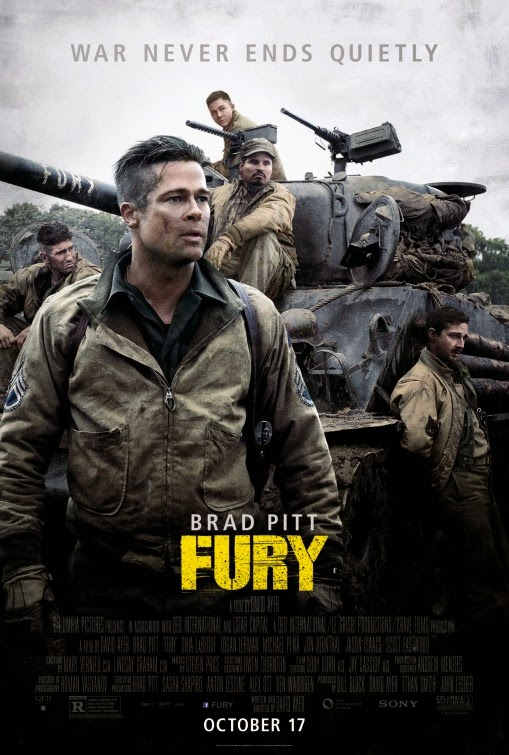 Every filmmaker wants to make a great film, and it really shows with writer-director David Ayer's "Fury." From his filmmaking bravado, to his mise-en-scène and adjustment to pacing that is less breathless and more in-tune with the World War II story he is telling, he seems to have stepped up without straying from his already-gritty sensibilities of 2012's South Central-set "End of Watch" and even 2014's drug-enforcement nasty "Sabotage." Probably not far off from being your grandfather's memories, this stark, unforgiving, exceedingly well-made war picture never once flinches, compromises, or even exploits the brutality for rah-rah crowd-pleasing. Ayer shows war as it most likely is—dirty, harsh, grim and virtually hopeless—and his obligatory air of machismo is still prevalent but feels more necessary than gratuitous. "Fury" is purposefully ugly, but it's also as black and white as war, which becomes problematic when the film itself lacks a complex, interesting gray area. There is no clear journey here, but Ayer just wants to say how hellish war can be in one day, and wow, what a hellish day it is.

It is April 1945, the last month of WWII's European Theater and Nazi Germany's fanatical resistance. U.S. Staff Sergeant Don "Wardaddy" Collier (Brad Pitt) leads his tank crewmen through enemy territory. When one of his men becomes a casualty, 18-year-old Army recruit Norman "Cobb" Ellison (Logan Lerman) steps in. Only eight weeks in, the green private comes in as a clerk typist who can type 60 wpm. His conscience too clean, Norman has never killed a man, but that will have to change. Fighting together since the North African Campaign, "Wardaddy" and his platoon—scripture-spoutin' gunner Boyd "Bible" Swan (Shia LaBeouf), hard-drinking driver Trini "Gordo" Garcia (Michael Peña) and Southern roughneck loader Grady "Coon-Ass" Travis (Jon Bernthal)—are on the precipice of Post-Traumatic Stress Disorder but see war as the "best job" they ever had. None of them are sane anymore.

Named after the Sherman tank, "Fury" opens with a German Nazi on a white horse being stabbed in the eye by "Wardaddy." When Norman first arrives, he cleans up the blood and a fleshy human face out of the tanker. The dead body of a soldier sinks into the mud as a tank rolls over him. A German woman cuts some meat out of a dead horse. A German child with a noose around her neck hangs by the side of the road. As a snapshot of war, "Fury" almost makes Steven Spielberg's "Saving Private Ryan" look sentimental by comparison. While the film is unsparing in its hellish, barbaric details of war, the men we have to follow aren't all fully fleshed out. Nothing, nada, is learned about the individual men in this platoon, like what kind of family (if any) they left back home. Outside of "Wardaddy" and Norman, the other three are virtually condensed into one cocky, swaggering type. On the other hand, we may not know where they all come from, but we generally understand why they are the way they are.

With a craggy face he stole from Danny Trejo and a back of scars, the formerly boyish-looking Brad Pitt commands the screen as he usually does and his effective performance as the flinky "Wardaddy" does capture a haunted soul. One cannot watch Pitt here without thinking of his colorful Nazi-killing Lt. Aldo Raine in "Inglourious Basterds," but it's not a total distraction, either. The character here acts as a tough-love father figure to his crew, promising to keep them all alive, and the viewer can just tell how Don Collier has lost himself. Logan Lerman is most affecting and identifiable as Norman, who has the closest thing to an arc of corrupted innocence from baby-faced typist to assertive soldier. Even if the screenplay prohibits the actors from getting more meat to chew on, the other three are all solid. Shia LaBeouf seems fully invested as "Bible," and Michael Peña provides some levity as "Gordo." How else could one play a soldier nicknamed "Coon-Ass" than as callous and despicably loathsome? Jon Bernthal sells it, but he doesn't manage to find much humanity in this cartoonish subhuman type until one brief conversation late in the film.

The combat scenes are riveting and rife with urgency, packing a visceral wallop. Even when the whizzing bullets nearly resemble a Stormtrooper's blast, the bloody effects are anything but videogame-fake. In between the doom-laden carnage, the highlight is one extended scene in a German apartment that switches from tension to comfort and then back to tension. Don and Norman discover a German woman (Anamaria Marinca) and her teenage cousin Emma (Alicia Von Rittberg) hiding out, and while the two women are terrified for their lives, Don gives them a box of eggs to cook as a meal for the four of them and then gives Norman a chance to take the lady his age to the bedroom. It's an observant and patiently paced centerpiece that isn't only a respite from the horror, but it gives Pitt the chance to show the last strands of civil compassion Don has from killing the enemy.

Full of flawless technical merit, the film greatly benefits from Roman Vasyanov's ("End of Watch") haunting, textured lensing harkening back to the war pictures of yore rather than any of the rough-and-tumble shooting and editing styles of today. The rousing, often scary music score by Steven Price also amps up the tension with choir chanting, which would sound overwrought in theory but really works in context. No better than good, "Fury" is unnuanced and not as thoughtful as it could have been, but makes up for those losses in tough, brutal intensity. Despite its lack of dynamic storytelling, the film does often stir and disturb. So, when it's harrowing, David Ayer rises to greatness.