Get Jazzed: "Whiplash" keeps one on edge, leaves one bruised and elated 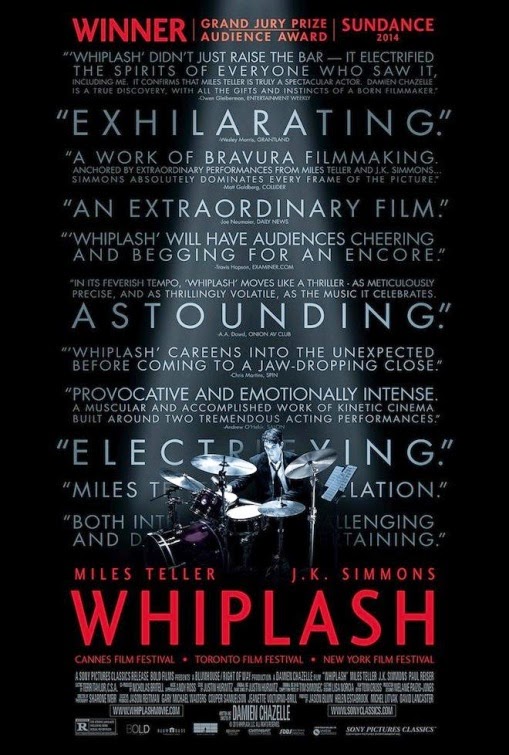 Never would one expect a film like "Whiplash" about discipline and raw talent in the world of jazz music to be as brutal and emotionally distressing as a blood sport. Somehow, sophomore writer-director Damien Chazelle (who wrote 2014's music-centric thriller "Grand Piano") certainly has what it takes to do much more than just trot out the "follow-your-dreams" formula. In fact, this is a hard-hitting, unromantic psychological study in brinkmanship to achieve greatness, the flip side of "Mr. Holland's Opus" with no interest in feel-goodery, going easy on its protagonist, or softening its, for all intents and purposes, antagonist. Expanding upon his 2013 short (which also starred J.K. Simmons), Chazelle showcases motivated directorial flair, a laser-focused script with minimal subplots, and two nuanced, fiercely riveting performances. Premiering at this year's Sundance Film Festival, "Whiplash" won the Grand Jury Prize and the Audience Award, and one can legitimately see why.

Starting his fall semester at New York's Shaffer Music Conservatory, introverted 19-year-old Andrew Neyman (Miles Teller) aspires to be a core drummer. He idolizes Charlie Parker and hopes to reach that prodigious caliber one day. That day might come sooner than he thinks when teacher Terence Fletcher (J.K. Simmons) discovers Andrew drumming one night in a practice room and later on invites him in to play with his top jazz ensemble as an alternate to turn the pages for the core drummer. Giving himself a pat on the back, Andrew gets confident a bit too early before Fletcher reveals his unconventional methods (read: sadistic psychological terrorism). A cruel hardass akin to an Army drill sergeant, Fletcher pushes his students hard with verbal and, in some cases, physical abuse. Meanwhile, Andrew works up the courage to ask out Nicole (Melissa Benoist), the girl who works at the classic movie house, but as Andrew becomes discouraged and made self-destructive by his new teacher, he might have let go of anything else holding him back. "You want the part? Then earn it," Fletcher taunts Andrew, who might get pushed to the brink to become one of the greats.

When you are a member of a sports team, a coach's one-track mentality tends to rub off on his or her players, and everything else in the player's life can become a last priority. Same goes for band, apparently. The central question writer-director Damien Chazelle seems to ask with "Whiplash" is this: There are huge, dangerous risks to achieving perfection in the area of one's passion, but is all the pain worth it? Terence Fletcher seems to think so, his advice to Andrew being, "There are no two words in the English language more harmful than 'Good Job.'" As counterpoints to both Andrew and Fletcher, the homesick Nicole hasn't yet declared a major at her school and Andrew's single father (Paul Reiser) is now a high school English teacher after failing as a novelist. In a key detail for the latter, Andrew and his dad take in a classic movie as their father-son ritual, and while Dad likes to sprinkle Raisinets atop the popcorn, Andrew eats around them. In a way, Mr. Neyman stands as who Andrew could be if he fails as a drummer, but Andrew wants to be better.

Miles Teller is no longer playing to type, the smartest guy in the room, but challenges himself from "Rabbit Hole" to his teen-comedy phase to here. Identifiable and completely root-worthy as Andrew, Teller seems all in to committing to the blood and sweat of Andrew's perserverence, and it helps the actor actually does 70% of his own drumming. Before Fletcher gets to him, he holds an unassuming confidence, and one still feels and pulls for Andrew, even when he alienates himself from everyone, including Nicole and his father. More akin to the Teller of "The Spectacular Now," "21 & Over" and "That Awkward Moment," the actor does have a quippy, cathartic moment at a dinner table, where he puts down unimpressed family friends who would rather talk about football and Model UN. While the 27-year-old actor more than holds his own, veteran character actor J.K. Simmons is nothing short of electrifying and unforgettable, finally getting the chance to really eat up a juicy part that of a volatile, profane S.O.B. With his hilariously caustic putdowns, he might be as close to a prime-to-explode cartoon without being too cartoony, with the mentality of R. Lee Ermey from "Full Metal Jacket," but keeps one glued to the screen. Fletcher has no problem throwing a cymbal at Andrew, using personal information about his father against him, or spitting out words of vitriol, but even he is guilty of human vulnerability when a tragedy occurs. Fletcher isn't as clearly established as he could have been (Does he have a family? Has he always been like this?), but Simmons dials the character down just enough to make him a wholly believable human monster. Kept in the margins but still integral to Andrew's arc to success, Melissa Benoist (of "Glee" fame) is an appealing, fresh-faced natural as Nicole, and Paul Reiser does a nice job as Andrew's father.

Drumming with an intense vitality, the film rises into a feverish climax on the stage of Carnegie Hall with tension and adrenaline that one cannot help but hold his or her breath or let their jaw drop to the floor. In tandem with its passion for jazz, the film is dynamically shot with a rapid, percussive rhythm in cinematographer Sharone Meir's ("Mean Creek") kinetic, albeit controlled, camera movements, including a lot of whip pans, and Tom Cross' tight, propulsive editing, measure by measure without rushing or dragging. "Whiplash" is potent, unflashy filmmaking, daring to place its audience in an uncomfortable place and put us through the wringer. With Andrew, we feel the blood on our hands. It's a film that earns every moment, particularly its powerful, exhaustingly stressful finale. It will be interesting to see Damien Chazelle push himself even more, but "more" than this might give audiences a heart attack. Who knew a film about music could be so thrilling?