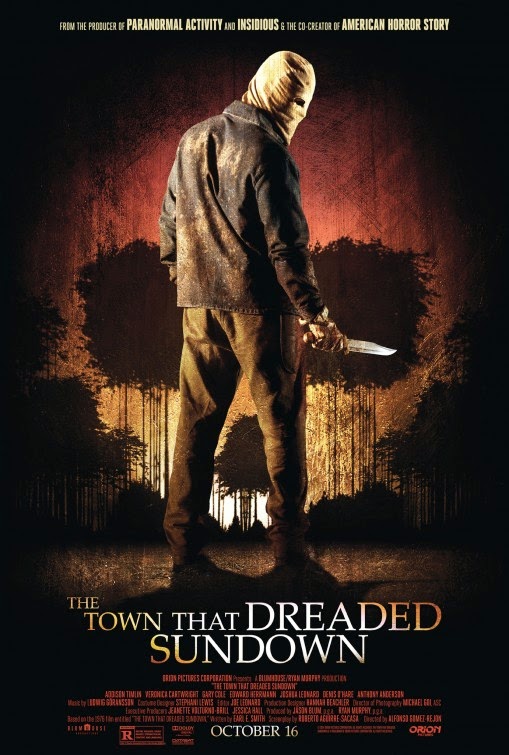 A sequel-cum-remake of the 1976 film of the same name, "The Town That Dreaded Sundown" is as meta and affectionate to its 38-year-old predecessor as Wes Craven's "Scream" movies were to their own canon. (A little fun trivia: 1996's "Scream" happened to name-drop the original film.) This redo doesn't merely reference the film from another era, it uses it as a major plot point and takes it in a clever direction. As there are exceptions to the rule, this is one of the most recent examples of a horror remake doing more than just being a by-the-numbers, made-by-committee carbon copy. It might not be as raw as the cinéma vérité-style original, but 2014's "The Town That Dreaded Sundown" is ruthlessly effective in getting the pulse racing with expertly crafted, genuinely startling moments of terror and retains an imaginative amount of style culled from an earlier time.

67 years ago in 1946, the small town of Texarkana, bordering Texas and Arkansas, was rocked by a tragic string of murders in which the so-called "Phantom Killer" terrorized and butchered teenage couples. Based upon those horrifying "Moonlight Murders," Charles B. Pierce's 1976 horror film "The Town That Dreaded Sundown" would become the town's infamous claim to fame. Now, on Halloween night in 2013, Texarkana high school senior Jami (Addison Timlin) and her respectful date, Corey (Spencer Treat Clark), leave the drive-in showing of the violent picture. When they park in a wooded Lovers' Lane-like cul-de-sac, they are soon attacked by a gun-wielding man with a bag over his head. The man tells Jami to turn around as he stabs Corey to death on the ground. Left as the sole survivor, Jami is shaken, not only by the death of Corey but by the instructions of her perpetrator to spread his message to her town to "never forget." Will Texarkana ever find peace?

From its attention-getting opener, one thing is certainly clear — 2014's "The Town That Dreaded Sundown" is not just average horror fare cynically pumped out to make the teenyboppers jump and squeal. With director Alfonso Gomez-Rejon's (TV's "American Horror Story") acumen behind the camera and cinematographer Michael Goi's slick flair for methodical tracking shots, canted angles, kaledoscopic filters, and creepy push-ins, the film couldn't have possibly flourished with a better visual stamp. The Lovers' Lane sequence not only toys with the '76 picture, but chillingly brings to mind the grisly real-life crimes committed by the Zodiac Killer and the Son of Sam (both indelibly captured in David Fincher's "Zodiac" and Spike Lee's "Summer of Sam"). Other set-pieces, the dispatching of a home soldier and his girlfriend in a hotel and then a chase through a wheat field, are so assuredly executed with a heightened sense of dread and tense, bloody sensation that can only be felt in a horror film made by those who know what they're doing.

Closely resembling the murders-mirroring-a-movie model of "New Nightmare" and "Scream," Roberto Aguirre-Sacasa's screenplay is still ambitious on its own. Like in Wes Craven's universe but without the humor, the "Phantom Killer" recreates the murders from the film (take the vicious "trombone" kill for instance), and shots from the original film are even spliced to blur the line between fiction and reality. When Lone Wolf Morales (Anthony Anderson, a link to "Scream 4") shows up to help Texarkana's police force, he refers to a copy of "The Town That Dreaded Sundown" in hopes of knowing the murderer's next move. In the sea of red herrings, character actor Denis O'Hare also plays Charles B. Pierce, Jr., the son of the 1976 original's director still living in town in his trailer full of his daddy's movie memorabilia, the killer's sack mask included. Proving to carry a film, even with help, Addison Timlin is not only appealingly sweet-as-pie as Jami, but she also makes for an intelligent, intuitive and emotionally available heroine. As the two boys who have had their eye on Jami, Travis Tope, as mysterious but sweet archivist Nick, and Spencer Treat Clark, as the victimized Corey, both make their own impressions. The rest of the ensemble, including Veronica Cartwright as Jami's grandmother Lillian, Joshua Leonard and Gary Cole as Deputy Foster and Deputy Tillman, and Edward Herrmann as Reverend Cartwright, dots every character with more nuance than what is usually expected in this type of film.

As a slasher horror film, "The Town That Dreaded Sundown" is a very well-made one, delivering on what the best kind do and even surpassing its forefather in this regard, but it actually has characters rather than cardboard archetypes to knock off. If the film ever fumbles, it's in the occasional logic lapses characters have when walking out at night, despite there being a curfew and, oh, a killer on the loose. After Jami's gripping chase with the "Phantom Killer," the reveal of its assailant is certainly unanticipated, although the motivations for killing each particular victim aren't so clearly defined. What really works, though, besides the horror stuff is the portrait of small-town America losing its innocence and the use of the local fear-spreading preacher and two mayors on both the Texas and Arizona side. As if the town were frozen in 1976, there's an anachronistic side to the characters driving around in classic model cars and wearing '70s-popular clothing styles in 2013. Against all trepidation that inevitably comes with a horror film named after a classic—or in this case, a minor classic—"The Town That Dreaded Sundown" feels like both a throwback and a revitalization, and above all else, it's actually scary. That's not common.