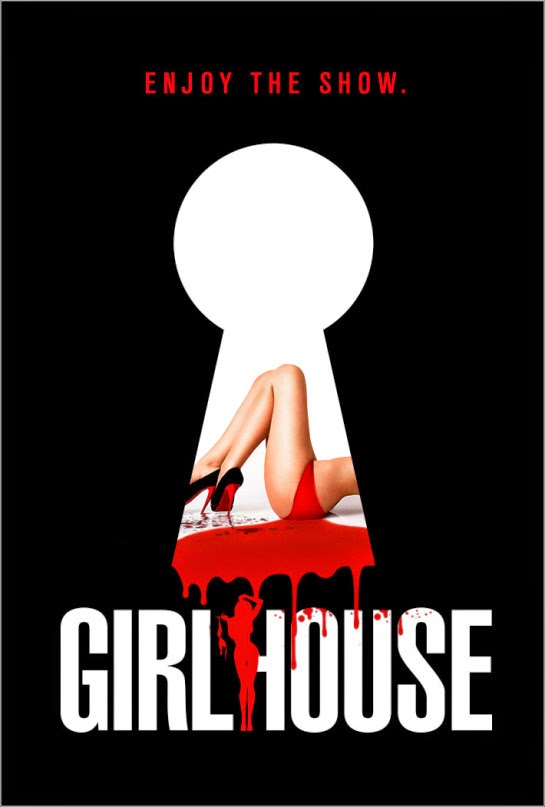 Directors Trevor Matthews & Jon Knautz and writer Nick Gordon should reward themselves for making a film that will satiate the expectations of exploitative stalk-and-slash affairs with skin. Like a presumptuous attempt to revitalize the "Slumber Party Massacre" video nasties of the 1980s into the new age, "Girl House" is a proficiently made slasher pic and reasonably scary for what it sets out to do. Opening with a prurient montage of soft-core porn, women moaning, and then a quote by Ted Bundy about the tenuous connection between pornography and male violence, "Girl House" already sets out to make one feel pervy and unclean, but how the women in the film are handled by being in charge of their sexuality is a smart move. It's voyeuristic and, like 2014's "The Den" and "Open Windows," seems to be more effective viewing on a laptop, but somehow avoids misogyny or full-out distastefulness.

Desperate to take over paying her college tuition for her recently widowed mother, Georgia peach Kylie Atkins (Ali Cobrin) chooses to tease and strip naked in front of her webcam for a secure website called "Girl House." After being approached by porn mogul Gary Preston (James Thomas) on campus, she takes him up on his offer, becoming the new resident of a secluded mansion with other scantily clad young women. For all the world to see, cameras are installed throughout the house, "Big Brother"-style, capturing the girls' every move. The girls' have one particular fan, known only by his web handle, "Loverboy" (white rapper Slaine), a lonely, psychotic computer hacker. The individual fates of "Girl House" are sealed once the leering man gets access to the mansion and his massacre begins.

Meant to motivate and perhaps empathize ever so slightly with the psychopath and his ensuing rampage, "Girl House" opens with a shocking Rehobeth, Alabama, 1988 flashback in which a chubby boy, nicknamed "Loverboy" (Isaac Faulkner), is chased by two girls who play a cruel, one-sided game of "I'll show you mine if you show me yours." He takes care of one of them in vicious fashion off a bridge. There's also a subplot with Kylie's old high school classmate, Ben (Adam DiMarco), who has always had a crush on her, finds out about her side job and reunites with her on campus. It's here and the whole webcast conceit that "Girl House" is a better version of "Halloween: Resurrection." When Ben's tech-savvy roommate Alex (Wesley MacInnes) starts watching one of the girls on her webcam in her dark, candlelit bedroom for a striptease, the scene builds to a tense clip as he starts to notice someone in the room and tries warning her. From then on, as Alex has access to all of the multiple cameras around the house, he becomes the audience surrogate, saying "Don't go in there" and "Turn around!"

Passing for Marisa Tomei's daughter, Ali Cobrin (2012's "American Reunion") has a sweet, naturally likable screen presence to be the ultimate "final girl." Kylie is a good girl who tries rationalizing why she signs up for "Girl House" and excusing porn for not carrying the stigma it used to, and the actress never actually undresses for the camera. Aside from now-"clean" heroine addict Anna (Zuleyka Silver) who's been replaced by Kylie and actually becomes the reason "Loverboy" gets set off, there's a certain respect for the characters that the viewer doesn't want to see them killed. None of them are drawn beyond archetypal types, and some are even less than that, but they're not ice queens or indistinguishable. Still, it's too bad we don't really get to know any of them. There's Devon (Alyson Bath), the blonde main attraction; Kat (Alice Hunter) and girlfriend Mia (Nicole Fox); wild girl Heather (Elysia Rotaru); and health nut Janet (Chasty Ballesteros). Slaine, as he's appropriately known, is quite convincing and ferocious as "Loverboy," who almost becomes sympathetic but is too sadly corrupted by his sick, demented fantasies. Also, it's a refreshing choice that "Girl House" foreman Gary is revealed in an offhand observation to bat for the other team.