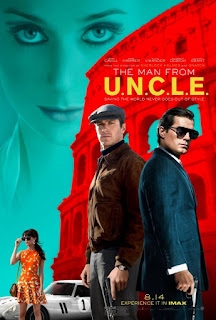 Re-imagining a TV show from the 1960s on the big screen can be a real siren call, having nostalgia on its side but also exemplifying the lack of creativity in Hollywood. With respect to the iconic 1964-1968 spy series "The Man from U.N.C.L.E.," filmmaker Guy Ritchie (2011's "Sherlock Holmes: A Game of Shadows") puts a fresh spin on the material with his affinity for cinematic style and snappy word patter, two paramount ingredients in a spy caper. Apart from the successful "Mission: Impossible" series, no other screen adaptation of a '60s spy show from the bygone days has really gotten it right (1998's "The Avengers" and 2002's "I Spy" were flat duds). Toning down the hyperactive, eventually tiresome energy from his last "Sherlock Holmes" film, Ritchie finds a consciously cheeky tone that avoids camp and delivers a bit of late-summer escapist f.u.n. where old-school style wins.

Billed as an origin story but transpiring during the Cold War in 1963, like its small-screen counterpart, "The Man from U.N.C.L.E." (an acronym for United Network Command for Law and Enforcement) introduces two highly trained men from opposite sides tasked with the same mission. Entering East Berlin, American art-thief-turned-CIA-agent Napoleon Solo (Henry Cavill) smuggles out mechanically inclined Gaby Teller (Alicia Vikander), the estranged daughter of a Nazi rocket scientist taken by a global terrorist organization. After they are pursued and shot at right out of East Germany by no-nonsense KGB agent Ilya Kuryakin (Armie Hammer), Napoleon and Gabby begrudgingly join forces with Ilya to locate Gabby's father and infiltrate the team who's using him to build an atomic bomb. As Gaby and Ilya must go undercover as an engaged couple in Rome, Napoleon will have to use his charm to tempt the brains of the deadly operation, gorgeous but dangerous Italian aristocrat Victoria Vinciguerra (Elizabeth Debicki). The two men will also have to set aside their superiority complexes if they don't want to blow their cover.

Stylish and knowing about how stylish it all is, and playful but never too cool for the room, "The Man from U.N.C.L.E." is a good deal of fun when it's being light and breezy and looking ultra-snazzy with its period-appropriate clothing. Writer-director Guy Ritchie and co-writer Lionel Wigram make sure there's a solid enough foundation for our characters to trot the globe, but let's be real. The plot is a paper-thin mission, involving enough but not containing much in the way of substance. It's the exceedingly good-looking cast's charisma and snappy interplay, as well as an irresistible retro-chic look, that really matter here. While no one is seen hanging off the side of a plane taking off into the air like Tom Cruise's Ethan Hunt, director Ritchie kicks off everything in Checkpoint Charlie with an intricately choreographed car chase and escape over the Berlin Wall that manages to both amuse and excite. Coming from Ritchie, the rest of the action is refreshingly low-key, like when Napoleon takes a breather to inadvertently sit back and enjoy a sandwich in a truck on shore, looking on as Ilya outraces baddies on a speedboat. There's even a darkly funny, drolly framed sight gag as a sadistic villain gets his grisly comeuppance in the background.

As it turns out, Henry Cavill (who could emerge into more than just the "Man of Steel") is more charismatic here as Napoleon Solo than he's ever been when getting to play a suave, dapper man's man. Numerous A-list actors who are bigger box-office draws were reportedly considered for the role, but Cavill is perfectly tailored for Solo, finding the right approach between slightly winking Bond clone and a classically charming leading man. Last appearing in box-office flop "The Lone Ranger" (another property that spawned a hit TV show, go figure), Armie Hammer shapes up to be a delightfully deadpan comedian and a skilled, roguish action hero with an inner rage all in one, while putting on a Russian accent. Hammer's accent is an amusing affect, but it's not of the cartoonish "Boris and Natasha" variety, either. Cavill and Hammer's chemistry smooths out as the film goes along, but Hammer is even better with a saucy Alicia Vikander (2015's "Ex Machina"), who more than holds her own as Gabby. One can feel the flirtatious heat without the two ever actually getting to make a move as every would-be kiss or hand gesture is interrupted. As impeccably coiffed villainess Victoria Vinciguerra, Elizabeth Debicki (a major standout in Baz Luhrmann's "The Great Gatsby") makes for a timelessly alluring and deliciously icy femme fatale. Hugh Grant doesn't get nearly enough to do in his in-and-out moments as U.N.C.L.E. head Alexander Waverly, but it's a treat to see him back on screen again nonetheless.

The film isn't free of dead air in between the livelier sections, but Ritchie keeps things running at a brisk pace more often than not, whipping out his super-cool bag of tricks without treading on bombast, and gives his fashionably costumed actors plenty of frisky wordplay that somehow never feels forced. With "Kingsman: The Secret Service," "Spy," and "Mission: Impossible - Rogue Nation" being the other three spy movies this year (and "Spectre," the next 007 outing, on its way), "The Man from U.N.C.L.E." might be more of a modest sleeper when recalled at the end of 2015, but it fulfills its mission to have fun. What's more, it ends with potential for another installment, sending the characters out with the title's acronym, and that's not such a bad idea if the winning combination of Ritchie and his appealing cast remain on board.