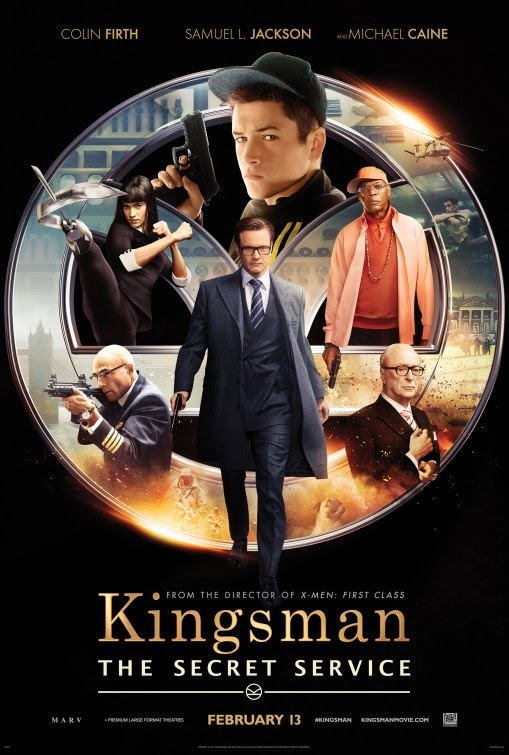 On paper, there should be no more life left in the spy-movie genre, having spoofed itself, from the cool gadgets and weaponry to the shag-worthy love interests to the custom-made suits and the colorful villains. A James Bond action-comedy for mature teens and adults, "Kingsman: The Secret Service" gives spy movies a second wind and nearly pulls out all the stops as a cheeky, kicky genre piece that means nothing more than to show audiences a great time. There's a sense of playful rebelliousness and fun-having by what director Matthew Vaughn (2011's "X-Men: First Class") and screenwriter Jane Goldman, both adapting another script from "Kick-Ass" creator Mark Millar and Dave Gibbons' comic book "The Secret Service," have cooked up. Those just expecting a stale British "Agent Cody Banks" with an R-rating and dry martinis will have their expectations overturned again and again.

17 years after the death of his secret agent father, troubled, chip-on-his-shoulder juvenile Gary "Eggsy" Unwin (Taron Egerton) now lives in a South London flat with his mum, her abusive thug boyfriend, and baby sister. Since quitting the Marines, he is unemployed and has taken to drugs and theft. When held in custody for his latest incident, Eggsy uses his father's bravery medal around his neck to call the number on the back. Before he knows it, the young lad is released from the police station and in the hands of Harry Hart/Galahad (Colin Firth), proposing Eggsy to be a candidate for the Kingsmen and showing him the ropes of the agency being fronted as a tailor shop. Enrolled into dangerous training with nine other recruits, overseen by senior Kingsman Merlin (Mark Strong), Eggsy slowly proves to follow in the footsteps of his late father. Meanwhile, technology billionaire Richmond Valentine (Samuel L. Jackson) has recently had one of the Kingsmen murdered, and at the start of his bigger plan to drastically shrink the human population, he's been abducting and imprisoning various political leaders and famed starlets. Can Eggsy be the super spy he was born to be?

Handled with verve and alternately sophisticated and profane wit, "Kingsman: The Secret Service" doesn't unload its bag of tricks all at once. Once a character is split right down the middle—and not at the waist—the film alerts the viewer that playing by the rules is old-hat and anything is possible at this point. There is a knowing sensibility here, too. Characters acknowledge the "far-fetched, theatrical plot" and winkingly crack wise about spy movies being only good as their villain, but it's more obvious than cleverly deconstructive. Eggsy names his pet pug J.B., though it's not after James Bond or Jason Bourne. It's also pleasing to see no obligatory romance between Eggsy and his friend and fellow competitor, Roxy (Sophie Cookson). Instead, Eggsy rescues an imprisoned Swedish princess and is then sexually rewarded her backdoor. The film isn't above casual sexism, but then again, neither was James Bond (and that was the '60s).

Looking dapper as umbrella-wielding gentleman and veteran agent Harry Hart, Colin Firth is seriously game in proving his mettle in the action department and wouldn't be out of place in the '60s TV show "The Avengers." Though surrounded by Firth, Mark Strong (solid and not playing a baddie for once as Kingsman instructor Merlin), and Michael Caine (classy window dressing as secret service foreman Arthur), 25-year-old Welsh newcomer Taron Egerton comes away as the star. He makes for an engaging, rakishly charming protégé and hero as Eggsy, who's vulnerable enough to become more than just a cocky punk and even puts his parkour skills to use. As the baseball-capped Valentine, Samuel L. Jackson seems to be having a ball playing a self-aware megalomaniac with a lisp, and while he garners a few laughs, whomever thought the lisp shtick would be funnier with repetition should have checked him or herself. Luckily, Sofia Boutella is more fiercely menacing as the most vicious 007/"X-Men" mash-up villainess, Valentine's henchwoman Gazelle. Her skin-slicing metallic stems are never touched upon, but so be it.

With cinematographer George Richmond and three editors, director Vaughn makes sure we are able to make out and breathe in every fresh, exciting, airtight stunt. If Harry's throw-down with a group of punks interrupting his Guinness and antagonizing Eggsy in a bar is only an appetizer, the biggest show-stopping set-piece comes later in a Kentucky church full of hate-mongering rednecks. Scored to Lynyrd Skynyrd's "Free Bird," this one startlingly amped-up sequence could have soured the tone to pieces and will still be tonally (and morally) jarring to the most sensitive audience member, but in several minutes, it matches the breathtaking choreography, anarchic glee, and bloody hyper-kineticism seen in Indonesian action spectaculars "The Raid: Redemption" and "The Raid 2." A skydiving sequence, where one of the recruits is without a parachute, also pushes the right vertiginous buttons. And, without giving anything away, the finale is hilarious, head-exploding fireworks, all cued to KC & the Sunshine Band's disco ditty "Give It Up." Unpretentious but also happening to be giddily and stylishly violent, "Kingsman: The Secret Service" is a well-oiled machine that aims to entertain and never misses that target.