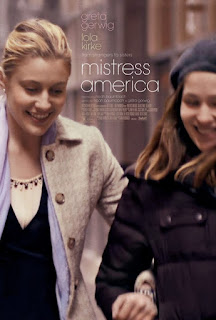 Prolific filmmaker Noah Baumbach (2015's "While We're Young") takes an interest in writing characters who are loaded with wit, come with a prickly side, and come of age a little late in the game. Following 2013's joyously disarming "Frances Ha," "Mistress America" marks the second co-writing pairing between writer-director Noah Baumbach and his on-screen muse and girlfriend, actress/co-writer Greta Gerwig, and it's a treat to see their sensibilities mesh so well. Though Gerwig's creation of Frances was someone of a quirky clown slow in becoming a "real person" in her late-20s, the character she plays here is perfectly judged once again, riding the line of compassion and observation. It, too, examines a budding female friendship and the slight unpleasantness of human behavior, but first and foremost, "Mistress America" is a comedy, and a very smart and funny one that often stings.

18-year-old Tracy Fishko (Lola Kirke) is having a tough time acclimating as an incoming Columbia University freshman in New York City. She's trying to make friends and gain acceptance into the elitist Mobius Literary Society, until her mother (Kathryn Erbe) encourages her to call up her soon-to-be stepsister Brooke (Greta Gerwig), a worldly, opinionated but scattered 30-year-old would-be entrepreneur who has dabbled in everything most of her life. Tracy takes an interest in Brooke and likes her style, and soon she realizes her future stepsister could be an interesting subject for her short-story submission. A self-described autodidact, Brooke talks a big game with several odd jobs—she tutors a grade-school girl, she's a cycling instructor, and she's a freelance interior designer—and grandiose plans of opening a restaurant-cum-bodega-cum-art-space-cum-hair-salon, but once her never-seen boyfriend pulls out from backing her financially, she hatches a plan to go ask her best-friend-turned-nemesis, Mamie-Claire (Heather Lind), who stole her T-shirt business idea, her two cats, and her fiancée, for an investment.

If "Frances Ha" was Noah Baumbach and Greta Gerwig's paean to Woody Allen and the French New Wave, "Mistress America" is more of a light, breezy college comedy with a hint of Whit Stillman literacy before making an about-face into a screwball comedy with some emotional depth. The film culminates in Greenwich, Connecticut, when Tracy and Brooke take a road trip, along with Tracy's only friend Tony (Matthew Shear) and his easily jealous girlfriend Nicolette (Jasmine Cephas Jones). There, Brooke picks up where she and Mamie-Claire left off and proceeds to make a pitch to ex-beau Dylan (Michael Chernus), now Mamie-Claire's husband. It turns into a play on film that of a door-slamming French farce with every peripheral character even getting a stab at the rapid-fire patter. Breathlessly paced and wittily scripted, this extended set-piece also happens to be worth the film's price of admission, and it never feels forced or stilted, back when the screwball comedies of old felt effortless. Mamie-Claire and Dylan, as well as pregnant book-club member Karen (Cindy Cheung) who's waiting for her husband to pick her up and off-putting neighbor Harold (composer Dean Wareham), get in on the madcap hilarity. When everyone begins reading Tracy's story whose character has been inspired by Brooke, the scene almost reminds of Baumbach's "While We're Young," in terms of ethics with a creative process (now writing, instead of documentary filmmaking), although there's not as much of a tonal change.

Nabbing her first lead role, Lola Kirke (the sister of HBO's "Girls" co-star Jemima Kirke who made a mark in 2014's "Gone Girl") has an unassuming appeal as Tracy, with the actress' appealingly husky voice, slight lisp and an intelligence in her eyes making her even more relatable and savvy. However, it's mumblecore goddess Greta Gerwig who's such an offbeat original of great charm that she has a way of turning the exasperatingly self-absorbed and passive-aggressive Brooke into a hilarious, larger-than-life, oddly lovable creation. Besides making her less-than-grand entrance down the TKTS bleachers in Times Square a sly hoot, Gerwig essays a dominant young woman who's already hit 30 and still hasn't yet settled into a career or achieved everything she tells Tracy that she has. The film finds pathos in realizing who Brooke really is, building up a confident, outwardly eccentric facade to hide how flawed and troubled the character really is inside. As Tracy sums her up, "she did everything and nothing."

There have been numerous films about a young person trying to make it in the hip, creative land of the Big Apple, but "Mistress America" keeps surprising on the basis of Noah Baumbach and Greta Gerwig's screenplay, as well as the performances. It's refreshing to find that neither one of the central women, Tracy nor Brooke, have to rely on a man. As proven the most with "Frances Ha," Noah Baumbach is a humanist and, here, he has a deep affection for Brooke. He's never cruel or mocking to any of his characters but doesn't let them off the hook, either. The film also boasts some expert technical credits, including a driving '80s-style synth score by Britta Phillips and Dean Wareham and "Frances Ha" cinematographer Sam Levy's lensing that still captures the glittering appeal of the city, even though Tracy feels disenchanted by it. Sharper at a tight, snappy 84 minutes and on more consistent footing than "While We're Young" (his other film released earlier this year that doesn't star Gerwig), "Mistress America" may continue the trend of Baumbach and his muse, like Woody Allen and Diane Keaton, but it greatly benefits from the lovely pairing of Gerwig and Lola Kirke.