This Is 70: Cute, glossy "Intern" benefits from De Niro and Hathaway's charm 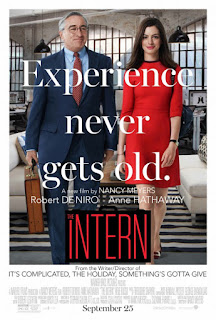 Like any cozy piece of wish-fulfillment comfort food from writer-director Nancy Meyers (2003's "Something's Gotta Give," 2006's "The Holiday," 2009's "It's Complicated"), who's never shot a less-than-perfect kitchen or polished interior seemingly staged by Crate&Barrel, it would be easy to cast a cynical eye on "The Intern." Still existing in the Nancy Meyers Cinematic Universe, bathed in enviously cushy and tasteful luxury if life were only this easy, the film once again gets by on the strength and charm of her actors. Also, instead of the bland-as-white-Wonder-Bread fluff about well-off white people and their problems it might resemble, this intergenerational workplace dramedy is wiser, more identifiable, and more appealing than that. It's a nice and comfortable soufflé, with a sunny, glossy disposition in a well-scrubbed, gentrified New York and a hip, modern workplace design that will not dash anyone's hopes, but the real benefit is watching forty-years-apart stars like Robert De Niro and Anne Hathaway share a sweet connection. They're wonderful together.

A retired 70-year-old widower living in Brooklyn, Ben Whitaker (Robert De Niro) was a VP for a factory that made telephone books (remember those?). Now, he has a hole in his life that needs to be filled. As luck would have it, Ben responds to flyer for a six-week-long "senior intern program" at an online couture fashion start-up called "About the Fit" and aces the interview process. Ben's boss is Jules Ostin (Anne Hathaway), a type-A woman in her thirties who turned her business into a booming success, filling positions with 216 employees and 4 new interns. Jules has reached her five-year goal in nine months and seems like she would have her life together, living in a brownstone with her husband Matt (Anders Holm), a full-time dad, and daughter Paige (JoJo Kushner), except her heavy work load takes away from her time at home. When it's suggested to Jules to relieve her of some stress by hiring a more-seasoned CEO, she initially resists, worried that everything she built will be misguided. This is where Ben comes in. At first, he begins as Jules' personal intern, but she has nothing for him to do. Then, against Jules' expectations, Ben might just be what she needed as her most unlikely friend.

With "The Intern," writer-director Nancy Meyers overcomes one's expectations of a middlebrow, commercially viable comedy about a retiree turning into a magical Fairy Godfather who can teach a career-driven woman to stick to her feminist guns. Although Meyers still has little time for cynicism when the movies are the one place viewers can experience a healthy, congenial worldview, her latest film might represent her most mature and progressive. In households and the career world, the wives and mothers can be the bread-winners and the husbands and fathers can be the homemakers and (despite a few jealous stay-at-home moms who aren't exactly cheerleaders for Jules' feminism) no one will judge either party. The generational gap between Ben and his younger fellow co-workers is mined for humor, albeit not in a way that mocks him; that one of the twenty-something interviewers acts like a telephone book is something from the Stone Age is a stretch but never dwelled on, either. Robert De Niro is moving and just plain lovable as Ben, an old-school baby boomer who's at an age where everyone around is dropping like flies, but he's never treated as a saintly mascot. From his first meeting with the short and guarded Jules, he begins to admire her dedication as the founder of her own company and proves himself not only to her but to others in the office that he is observant, helpful, and chivalrous. If Anne Hathaway's fashion magazine intern Andy Sachs from "The Devil Wears Prada" grew up into her own boss and changed her name, the result would be Jules Ostin. Hathaway is so winning and completely credible as this warm, if business-minded, personality with a lot on her plate. Your heart aches for her struggling to balance life and work, and there is a genuine poignancy to a touchy-feely scene set in a San Francisco hotel room where Jules openly discusses her rocky marriage with Ben.

Sometimes a little too cute and toothless but ultimately in touch with universally human feelings, "The Intern" is a pleasantly smart entertainment for adults that resists condescension and cheesed-up sap, actually taking time out of its 121 minutes to listen to and understand its characters. The likable supporting players are also fun to hang around, including the lovely Rene Russo as the company's in-house masseuse Fiona, "another oldie but goodie" who's mutually attracted to Ben; a delightful Christina Scherer as Jules' harried, overworked secretary Becky; and the always ingratiating Andrew Rannells as Jules' office manager. The film only really falls out of step with the established reality in one self-contained segment. When the multitasking Jules accidentally sends an incriminating email to her mother, Ben and the boys, employees Jason (Adam DeVine) and Lewis (Jason Orley) and intern Davis (Zack Pearlman), do Jules a solid by breaking into the mother's house to trash the email. It proves Ben's camaraderie, but with a musical cue to "Ocean's Eleven," it is a needlessly broad and silly tonal lapse into farcical hijinks. In spite of coming down to some pretty didactic speechifying and wrapping up an interpersonal conflict in a neat, tidy bow, the film rings plenty of true notes to power through the false ones. For once, it feels like Nancy Meyers is making progress in becoming more in touch with the real world.