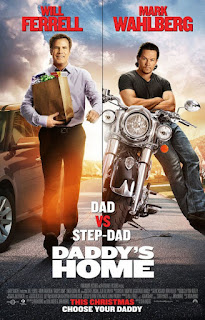 "Daddy's Home" upholds the tired tradition of silly comedies that pit two disparate people against one another. You know the premise: petty adults who should know better wage a war. There were glimmers of hope and possibility here for a subversive black comedy or some light, wacky fun, but it uncomfortably lands somewhere in between family-friendly slapstick and an R-rated raunchfest with heartwarming hugs in the end. It's as if the film was intended to be rude with a capital R but then had to fill a Christmas release slot for families. Will Ferrell and Mark Wahlberg still do carry over some of the comedic chemistry they shared in 2010's buddy-cop action comedy "The Other Guys," but all writer-director Sean Anders (2014's "Horrible Bosses 2") and co-scribes Brian Burns and John Morris (2013's "We're the Millers" and 2014's "Dumb and Dumber To") come up with is a tolerable but tame and inconsequential time-waster.

Optimistic, mild-mannered smooth-jazz radio executive Brad Whitaker (Ferrell) tries his best to be a loving stepfather to the two children of wife Sara (Linda Cardellini). He can't have his own children due to an accident with a dental X-ray machine, but after finally making progress with Megan (Scarlett Estevez) and Dylan (Owen Vaccaro), Brad feels threatened when black-ops bad boy Dusty Mayron (Wahlberg), Sara's ex-husband and the biological father of her kids, comes to town. He's muscular and handy but not domestically responsible, one of the reasons Sara left him and needed a man like Brad, and the war between Dusty and Brad is immediately on. Dusty tries to pick up where he left off, being the "cool dad," but Brad isn't about to back down so easily. Can they learn to be co-dads?

The high-concept premise to "Daddy's Home" isn't automatically doomed to fail, but the jokes are very hit-and-miss. A broad slapstick gag involving a mishap with Brad steering Dusty's motorcycle is almost surreal in its over-the-top absurdity that one can't help but cackle. On the other side of the coin, there is an entire subplot devoted to Brad's fertility, along with a payoff involving the comparison between Brad and Dusty's testicles by a fertility doctor (Bobby Cannavale), and a whole sequence at an NBA basketball game where Brad gets drunk and makes a complete fool of himself falls flat. Acting as if erections, racial prejudice, and dogs humping are jokes unto themselves, the film seems content to keep playing to the lowest-common-denominator and has a tendency to ridicule certain characters and then pull back to apologize. 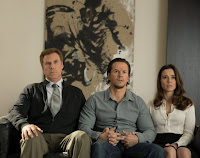 "Daddy's Home" is not laugh-free, but it might have stood more of a chance with a smarter, funnier script to go with its stars. Will Ferrell is actually less likable when playing meek and squeaky-clean, but here, as the low-testosterone Brad, he's at his best when trying to upstage his paternal opponent and getting angry in the process ("I am a hot habanero pepper right now!"). As the macho Dusty, Mark Wahlberg is comedically game as usual. He ribs on his own hunkiness, his constant shirtlessness still good for a running joke even after it ran in "Date Night." As Brad's wife and Dusty's ex Sara, the appealing Linda Cardellini plays the character as smarter than expected, if nothing else, but she's mostly a prop. Stand-up comedian Hannibal Buress is the biggest scene-stealer as handyman Griff who becomes Dusty's freeloading buddy and the kids' makeshift uncle. The final scene with a star cameo is a hoot, but more laughs should have been at home in the dumb, strained "Daddy's Home."