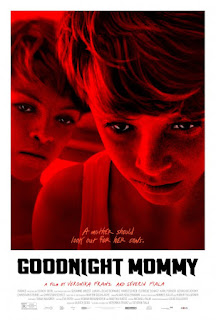 As Roman Polanski's "Rosemary's Baby" (1968), Brian De Palma's "Carrie" (1976), and Jennifer Kent's "The Babadook" (2014) have proven, motherhood can be a monstrous thing in horror films, but so can childhood. Mastering the art of misdirection, writer-directors Veronika Franz and Severin Fiala make sure the viewer is clueless as where to rest his and her allegiances in "Goodnight Mommy"—the German title, "Ich seh, Ich seh" means "I See, I See"—an effectively disturbing Austrian psychological horror film that will be difficult to shake. Going in sync with its innocuous post-bedtime-story farewell for its title, the film cheerfully opens with a clip from 1956's "The Trapp Family" of Ruth Leuwerik singing a heartwarming lullaby to her von Trapp brood. What follows, then, is deeply horrific and grippingly twisted, like a dark-as-night Brothers Grimm fairy tale of innocence, malice, paranoia and denied grief.

The premise alone is a freaky humdinger. Identical twin brothers Lukas and Elias (startlingly played by real-life identical twin brothers Lukas Schwarz and Elias Schwarz) spend their summer in the idyllic Austrian countryside, playing outside and being boys while waiting for their mother to return home from reconstructive plastic surgery after some sort of accident. When Mommy (Susanne Wuest) arrives, her face is wrapped in mummylike bandages and the boys notice something is off about her. She is cold and austere, instituting new house rules and demanding Lukas and Elias to keep their noise level to a dull roar and let her rest. As the boys come to the suspicion that this cruel woman might be an imposter and not really their mother, they will have to turn the tables if they want to extract the truth.

Languidly paced, meticulously plotted and designed, and immensely chilling, "Goodnight Mommy" is executed with quiet, clinical precision, filmmakers Veronika Franz and Severin Fiala remaining in assured control of every frame of their feature debut. For portions of the film, itself very much a chamber piece, it is virtually wordless and yet simmers along with a chilly tone and a menacing hum that holds the viewer and refuses mercy. They craftily build up such a pall of unease through their use of Martin Gschlacht's flawless cinematography and Hubert Klausner and Hannes Salat's production design, both matching the antiseptic sleekness of the modern home. Nightmarish eeriness abounds as Lukas and Elias spy on Mommy unwrapping her bandages, only to reveal a bloodshot eye in a bathroom magnifying mirror, and later unleash one of their hissing pet cockroaches from their aquarium into the possible intruder's bedroom. As a respite from the film's aura of dire uncertainty, Franz and Fiala also stage a tense near-miss when the boys must come up with excuses to get rid of a pair of Red Cross workers who come into the house for a donation.

Aesthetically and narratively, "Goodnight Mommy" emanates an elegant sense of dread. Even when ruthlessly brutal extremes are taken to punctuate the uncompromising final blow, this is classy horror filmmaking of both arthouse and extreme-genre sensibilities. The screenplay ensures that there is no safety net to catch any of the characters or one focal point of empathy, but also has the daring to explore the unconditional love and ugliness between mothers and children, as well as the difficulties of coping with trauma and loss. The final revelation that the film goes with may not be anything original—listing off other films would instantly give it away—but it's no less unnerving. The ways in which helmers Franz and Fiala get to the core of the mystery is sneaky and emotionally upsetting rather than coming off as an arbitrary gimmick. They drop only the subtlest hints of breadcrumbs, and upon closer examination, the narrative secret mostly checks out. More gut-wrencher than stomach-churner, "Goodnight Mommy" hypnotically crawls under the skin and follows the viewer home, remaining there. It challenges and rewards, two things that make up the power of great horror cinema.