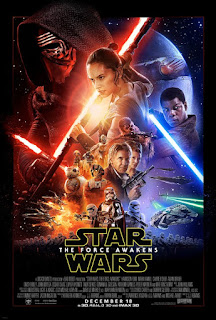 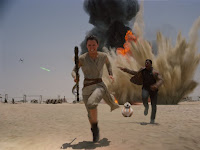 Since George Lucas' 1977 space opera "Star Wars," it has not only become a pop cultural phenomenon but has provoked such strong fandom that it's practically a religion now. Coming with a freakish amount of drooling hype, "Star Wars: Episode VII - The Force Awakens" is the most highly anticipated movie of the year, and if one is able to separate the fanfare and how well-made the film itself is, the genuine article fulfills audience expectations and then some. George Lucas passed the baton and delegated writer-director J.J. Abrams—along with co-writers Lawrence Kasdan (the scribe for 1980's "Star Wars: Episode V - The Empire Strikes Back" and 1983's "Star Wars: Episode VI - Return of the Jedi") and Michael Arndt—for this seventh saga, the canon seems to now be in great hands. In terms of energy and spectacle, danger and stakes, and characters and dialogue, the film is everything a "Star Wars" sequel thirty-two years in the making should be. Spoilers will be kept under lock and key, but it can be said that "Star Wars: Episode VII - The Force Awakens" is an exciting, wondrous, perfectly cast, wholly satisfying gush of consistent entertainment.

An approximate thirty years after the destruction of the second Death Star, last Jedi knight Luke Skywalker (Mark Hamill) has vanished. X-wing fighter pilot Poe Dameron (Oscar Isaac) has been sent on a secret mission to find him by Luke's twin sister General Leia Organa (Carrie Fisher), who leads the Resistance against the First Order, a military-political organization influenced by the Galactic Empire and lorded by Supreme Leader Snoke (Andy Serkis). When Poe is captured by the Dark Side's apprentice Kylo Ren (Adam Driver), who seeks information to find Luke, and rescued by stormtrooper-with-a-conscience Finn (John Boyega), they crash-land on the desert planet of Jakku. There, Poe and Finn team up with a scrappy, skilled scavenger named Rey (Daisy Ridley) and droid BB-8, and later Han Solo (Harrison Ford) and Chewbacca (Peter Mayhew), to stand up against the First Order and possibly awaken the light side of the Force.

As was the case with "Mad Max: Fury Road," "Jurassic World" and "Creed," "Star Wars: Episode VII - The Force Awakens" doesn't deviate far from the original story but goes back to what made the classics work in the first place. It's comfortably reverent but full of verve and heart instead of resorting to shameless fan service or getting into the weeds with exposition. Unlike most of the derided prequels—and to be honest, none of them are outright bad—this sequel to "Return of the Jedi" genuinely feels like a "Star Wars" movie. If one recalls George Lucas' writing being the chief failure behind the prequels, those didn't exactly leave the biggest of shoes to fill. The first words heard in this film couldn't be more correct: "This will begin to make things right." Throughout, J.J. Abrams keeps a sincere tone that injects humor in all the right places and manages to juggle several balls in the air without over-explaining or clogging the simple storytelling. John Williams' wonderful score swells and soars from the word go, as the iconic crawl with the yellow text tells us all we need to know, and Abrams even includes the old wipes for screen transitions.

23-year-old British newcomers to the space saga, Daisy Ridley is a fresh face (despite her resemblance to a younger Keira Knightley) and an excellent find as the awesomely resourceful Rey, and John Boyega (2011's "Attack the Block") gets to balance charisma and vulnerability as Finn, the first stormtrooper to reveal any humanity. Both characters are wonderfully developed through their actions and it's terrific to see a young woman at the center who's actually resistant to have her hand held when running for their lives. The versatile Oscar Isaac is his charming self and brings an undeniable Han Solo vibe to Poe Dameron, while a chilling Adam Driver provides shading and internal conflict as Kylo Ren, whose black cape and helmet might ring a bell. Like C-3PO and R2-D2 before him, new droid BB-8 is a character, too, with a warmth and an adorable personality. Lupita Nyong'o is also soulful and expressive in her motion-capture performance as wise cantina owner Maz Kanata. If every new character doesn't get a fully fleshed-out treatment, more will be revealed throughout the rest of the trilogy. This is to say nothing of Harrison Ford's Han Solo, Peter Mayhew's Chewie, and Carrie Fisher's Leia. Seeing them all back on the screen is such a welcome sight, like revisiting old friends, and their interplay with one another is affecting and disarming as ever.

J.J. Abrams tackled the "other" popular space-set property and brought a vitality to the "Star Trek" reboots. With "Star Wars," technology has surely advanced in nearly four decades for special effects, so it's refreshing to find that the film makes more use of time-tested practical effects, which are more tactile and vibrant than polished, too-slick CGI. The action set-pieces are even some of the most thrilling in the entire series, an aerial chase in the Millennium Falcon to Rey outsmarting the octopus-like rathtars aboard a freighter to an arrestingly staged lightsaber battle in a snow-covered forest. Though there are already detractors who see this sequel as a slavishly faithful rehash, the past and the future of the people in a galaxy far, far away fold over here, time is spent with both characters old and new, and what seems to be coming in "Episode VIII" is highly anticipated. Able to stir up chills, laughter, tears, and a childlike giddiness, "Star Wars: Episode VII - The Force Awakens" is that rare kind of crowd-pleasing blockbuster, and we have Abrams to thank for salvaging everyone's childhood. The Force is stronger than ever with this one, and that's no hyperbole.