Pretty Boy: "The Danish Girl" impeccably made, exquisitely acted, but also a bit too perfect for full dramatic impact 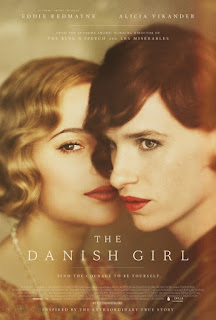 The true story behind "The Danish Girl" is a brave and inspiring one for the transgender movement, given how relevant it is today with 2014 being a banner year for the community's activism. Set nearly 90 years ago, the film, based on David Ebershoff's fictionalized biography, plots the marriage between real-life Danish painters Einar Wegener (Eddie Redmayne), the first recorded person to undergo sexual reassignment surgery, and Gerda Wegener (Alicia Vikander). In dramatizing this then-rare but more-timely-than-ever story about love and identity, director Tom Hooper (2010's "The King's Speech" and 2012's "Les Misérables") and screenwriter Lucinda Coxon approach it with such a respectful delicacy and the utmost grace that whereas the film as a whole is almost decorously fussy and just-so to a fault, the two soul-stirring lead performances are more dramatically lasting than anything else.

Copenhagen, 1926. Einar Wegener has had early success with his landscape paintings, while his wife Gerda lives in his shadow and still tries to find appreciation for her portraits. When Gerda's regular ballerina model is not present to pose, she volunteers her husband, who comfortably slips on stockings and rests a dress against his body, and late convinces Einar to pose as his own cousin Lili at an artists' ball. It begins as a playful game of dress-up until Gerda discovers her husband dressing up as Lili is not a phase but an expression of his true self. Einar begins wearing lingerie under his suits, seeing a man named Henrik (Ben Whishaw) who kissed Lili at the ball, and posing as Girda's painting muse. Career opportunities eventually open up for Gerda, but she has trouble coming to terms with the fact that her husband will no longer be her husband. Dressing up as Lili is not enough for Einar, then, as he tries finding a doctor to go through with the surgery that will allow his anatomical parts match his inner identity. He is diagnosed as certifiably insane or schizophrenic before Gerda and her husband meet trustful, forward-thinking doctor Warnekros (Sebastian Koch). The risks of the new procedure are potentially dangerous, but Einar will be much closer to feeling like himself as Lili Elbe.

As a study in empathy, "The Danish Girl" is even-handed and smartly avoids taking sides of either Einar/Lili or Gerda. The film valiantly tells a story that needed to be told, but it disappointingly gets more into the head of Girda rather than Lili. Einar's transformation into Lili lacks the sort of deeper understanding to make her a more fleshed-out figure, but it's a testament to the versatile Eddie Redmayne for bringing more layers than he's afforded by the script. After his extraordinary, Oscar-winning turn as Stephen Hawkings in "The Theory of Everything," Redmayne takes on another acting challenge that calls upon him to physically transform. He's impassioned but understated as Einar and Lili, making a demure but lovely woman with his androgynous features and feminine mannerisms. In one of the film's most indelible scenes, Einar pays for a peep show to watch a woman strip behind glass, trying to duplicate the gestures of her arms, and the two mirror one another in a sort of dance. Starting her breakout year with sci-fi thriller "Ex Machina," Alicia Vikander should not be undervalued for her work in what actually counts as a co-lead performance — perhaps the title should have been "The Danish Girls." Actualizing within Gerda the honoring of her husband's wishes, the self-blame, and the disappointment, Vikander actually has the trickier and meatier role that allows for more nuance. The script refreshingly doesn't keep Gerda at one note; she gives her husband unconditional support but has to let go of him, and once the film is over, her loneliness is lingering. In supporting parts, Matthias Schoenaerts ("Far from the Madding Crowd") is enticingly virile as the open-minded Hans Axgil, one of Einar's childhood friends who becomes fond of the abandoned Gerda; Ben Whishaw brings an intriguing sensitivity as Henrik, who gives Lili her first kiss; and Amber Heard adds a splash of energy as free-spirited ballerine Oola, Gerda and Einar's close friend.

Besides being exquisitely performed, "The Danish Girl" is gorgeously photographed and impeccably made all around. Danny Cohen's (Hooper's usual collaborator) cinematography is lush and painterly but brings less attention to itself without the overly precise asymmetry found in "The King's Speech" and far fewer tight close-ups and show-stopping shots than "Les Misérables." Paco Delgado's lovely costuming is also key. It's a soft, polite, often too-mannered stepping stone for mainstream acceptance, a prestige period drama that will be right up Oscar voters' alleys. Though the film ends on a poetic metaphorical image that should feel more devastating than it is, Redmayne and Vikander's deeply felt performances will endure.