Dirty and Dirtier: "Triple 9" pulpy but too familiar to engage 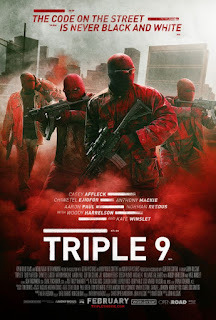 “Triple 9” is a mean but not-so-lean cops-and-robbers thriller wallowing in the savage tastes of Australian director John Hillcoat (“The Road” and “Lawless”), although it feels much more like a David Ayer movie. It’s gritty, hard-edged and sordid, but allowing the viewer to remain invested in characters who are criminals is a crucial missing ingredient. While director Hillcoat keeps things buzzing along okay, all of it is a little too familiar and humdrum to be involving enough, not helped by poorly developed characters. Aiming to be a pulpy, cynical potboiler with grainy, underlit aesthetics, “Triple 9” isn’t anything terribly special, a drearily mediocre misfire, despite being stacked with top-notch talent on both sides of the camera.

In Atlanta, Georgia, United States, ex-Special Forces cop Michael (Chiwetel Ejiofor) pulls off a bank heist with his gang of trained professionals who are either, like him, dirty cops or former cops. By the orders of Russian-Jewish mob wife Irina (Kate Winslet), the job is to retrieve a safe deposit box, containing information that could release her imprisoned mafioso husband, and the payday extends to hothead Marcus (Anthony Mackie), crackhead ex-cop Gabe (Aaron Paul), getaway driver Russell (Norman Reedus), and Jorge (Clifton Collins, Jr.). Irina’s sister Elena (Gal Gadot) also happens to the mother of Michael’s child Felix (Blake McLennan), whom Irina uses to persuade Michael to perform one last job that involves breaking into a Department of Homeland Security facility. The crew reasons that they can only pull it off with a “999,” code for “officer down.” Enter upstanding cop Chris Allen (Casey Affleck), who’s just been transferred from another division and partnered up with Marcus. All the while, the one investigating the first robbery is Sgt. Detective Jeffrey Allen (Woody Harrelson), Chris’ uncle.

“Triple 9” seems to be marking time. At the start, the film delivers in-your-face intensity with an opening bank heist sequence. There’s also a raid on an apartment complex in a memorable set-piece bubbling with tension as Chris leads his team with a riot shield. Unfortunately, as the film plays out, screenwriter Matt Cook makes no effort to provide context and history between his thinly drawn characters, let alone a basic reason to care about them. That they aren’t warm, squeaky-clean people isn’t the problem here; it’s that they are treated as pawns to serve the plot and nothing else. (They might as well be named “Dirty Cop #1” and so on.) Once everything begins coming to an inevitable head, the picture gets as twisty in its double-crossings and high in its body count as “The Departed.”

The actors don’t show any lack in valiant commitment but can only be as good as what’s been written for them. Yes, Chris Allen is the one virtuous, salt-of-the-earth character in the film with any sense of humanity, and while Casey Affleck is fine and sympathetic enough in the role, the only heavy demands for the actor is to consistently chew his gum as if he’s a cow chewing its cud. The magnetic Anthony Mackie gets a few moments to shine as the corrupt Marcus, and Chiwetel Ejiofor at least gets something to lose as Michael, who will do anything to keep seeing his son, while Norman Reedus and Aaron Paul are wasted. Woody Harrelson gets to play the Woody Harrelson role of Chris’ uncle Jeffrey, a boozy, drug-snorting detective, and he’s more than capable in it. In one scene, an unrecognizable Michael Kenneth Williams is entirely convincing as Sweet Pea, a transgender prostitute and informant. With big hair and a delicious Russian accent, an infrequently used Kate Winslet gives her best go at a potentially juicy part that never allows her to move beyond single dimension. The idea of the actress playing a Russian-Jewish mob wife is more fun than what actually transpires.

There is no shortage of films involving corrupt law enforcement and, of course, not all of them can be as effective as the last. Problematic on a storytelling level, "Triple 9" at least brings the grit and forgoes the Boston milieu for once. Nicolas Karakatsanis’ on-location shooting in Atlanta, Georgia lends a grimily lived-in sense of place and the music score by Bobby Krlic, Atticus Ross, Leopold Ross and Claudia Sarne is moody and propulsive. Had the narrative and pacing been more airtight, it would have been easier to not dwell on everything it does wrong. Right down to a rushed, unsatisfying coda, “Triple 9” leaves the audience empty on reasons why they should give a rip about the outcome. The further one gets away from it, the more one will forget that it ever existed at all.