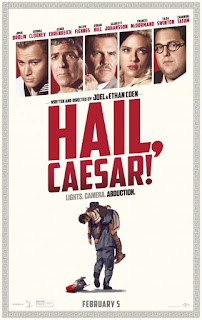 Those in charge of the advertising campaign for “Hail, Caesar!” must have been at a loss. It’s the latest offering from the Coen brothers but not the knuckleheaded slapstick farce being sold. There is a specifically Coen-y screwball panache at work here, genre-busting writer-directors Joel Coen and Ethan Coen (2013's "Inside Llewyn Davis") embracing their love for movies in this valentine to Hollywood’s Golden Age and the studio system in the 1950s. A light but clever picture whose parts are greater than the whole—and what parts!—“Hail, Caesar!” is not a major in the original filmmakers’ oeuvre. It’s more lark than full meal, but there is no denying that this is one of the Coens’ most plainly enjoyable and could probably end up being their most misunderstood and divisive.

Eddie Mannix (Josh Brolin) is a studio head for Capitol Pictures and their top “fixer,” and he is about to have a full day with his clients. While taking a break in his trailer while shooting Roman-Biblical epic “Hail, Caesar! A Tale of the Christ” on the lot, movie star Baird Whitlock (George Clooney) goes missing. Everyone thinks he is just on a bender, but Baird has actually been kidnapped and held for a $100,000 ransom by a mysterious group in a Malibu mansion. Meanwhile, swimming starlet DeeAnna Moran (Scarlett Johansson) has become pregnant, but her reputation has to be protected; good-natured cowboy matinee star Hobie Doyle (Alden Ehrenreich) has his public image altered by being cast as the lead in a costume drama with incompetent results; and finally Eddie has to continually fend off twin sisters Thora and Thessaly Thacker (Tilda Swinton), who live on gossip for their own columns. All in a day.

Loosely structured as a day-in-the-life caper with Eddie Mannix at the center, the film takes enough trips around the studio to feel like a collection of vignettes — and that’s a large chunk of the fun. Eddie has a meeting over the religious-sensitive issues with the movie-within-a-movie “Hail, Caesar!” with a rabbi, priest, reverend and padre, and it’s as chuckle-worthy as it sounds. A sequence from an “aquamusical” starring DeeAnna Moran (Scarlett Johansson) as a mermaid and her water-ballet dancers is a magical marvel. A song-and-dance number, “No Dames,” is a high-spirited, sublimely choreographed delight as dreamy movie star Burt Gurney (Channing Tatum) leads a bar full of sailors. It’s great fun to watch and a little homoerotic subtext is not lost on the Coens. Another highlight involves the direction given to Hobie by pretentious director Laurence Lorenz (Ralph Fiennes, killer) on the soundstage set of a period drama called “Merrily We Dance.” The jokes regarding a “mirthless chuckle,” a flubbed line and the director’s name actually get funnier with repetition.

Watching the picture is like touring a studio lot, as everyone in the starry ensemble is playing some Old Hollywood type. Josh Brolin is given ample time to develop some personal drama as Eddie Mannix, whose more-than-once daily trips to the confessional prove to be troubling for him but amusing to the audience. Very adept at playing a dunce in Coen-helmed comedies, George Clooney has a ball mugging and preening as Baird Whitlock, who remains in his swords-and-sandals costume even as a hostage. No matter how small, all of the supporting performances are game. Channing Tatum is a well-used hoot in his sailor dance number, standing in for Gene Kelly; Alden Ehrenreich is an endearing stitch, turning up the aw-shucks attitude as singing cowboy Hobie Doyle and making lasso artistry out of spaghetti noodles; and Scarlett Johansson is right on the money as an Esther Williams type. And there’s even more where they came from. Frances McDormand (married to Joel Coen) makes her one hilarious scene count as chain-smoking, scarf-wearing film editor C.C. Calhoun; Tilda Swinton is doubly droll as twin gossip columnists Thora and Thessaly Thacker; and Jonah Hill, barely saying much, has a role as the studio surety that’s funny in itself.

Straight-faced about its own artifice, “Hail, Caesar!” is a gentle, playful Tinseltown satire but also just an offbeat, entertainingly wonky homage to the simpler, good ol’ days of of making motion pictures. Nearly every genre, from westerns to musicals, is affectionately recreated without parody (kudos to Roger Deakins’ sparkling cinematography), which will be a treat for movie lovers, particularly those who regularly tune into Turner Classic Movies. Potentially more layered on a repeat viewing, this prankish diversion still adds up to little and doesn't seem to have a great deal on its mind, and that’s just fine. Come to think of it, though, Paul Thomas Anderson’s head-scratcher “Inherent Vice” would make quite the companion piece in a way. Like Joel and Ethan Coen’s “The Big Lebowski,” the narrative is an episodic and ultimately trifling shaggy-dog tale, but they sure know how to make a plot thread involving Communist screenwriters and a submarine an inspired piece of absurdism. Even if there’s not a whole lot of soul, sometimes just plain old fun is enough.