Ya Dig?: Half-baked "Inherent Vice" goes up in a dense puff of smoke 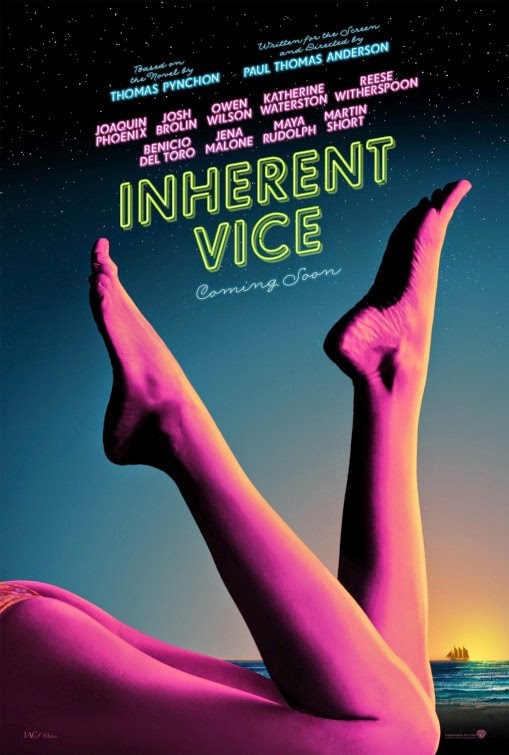 A film does not have to completely cohere and make sense as long as it challenges and involves on an emotional or intellectual level. Coming from auteur Paul Thomas Anderson (2012's "The Master"), one of our greatest American filmmakers behind Altman-esque masterpieces "Boogie Nights" and "Magnolia," psychedelic film noir "Inherent Vice" seems like his first chance to be fun and loose, but it's just too much of an enigmatic gasbag that baffling, disappointing and maddening seem to be its chief intentions. Based on Thomas Pynchon's dense 2009 novel, the film must had been a hard nut to crack, indeed, even for Anderson (who also wrote the screenplay). Sometimes, a film can succeed in the journey, even if the destination is less than satisfying, but this adaptation is like a journey that goes nowhere, so when the destination finally arrives, it still feels like nothing much has come to pass. The film could end after any scene in its loopy, albeit lugubrious, 148 minutes and it still wouldn't make a lick of difference. If there is a point (and perhaps one just needs to be more acquainted with Pynchon to find it or "get" it), Anderson has sorely missed it.

1970, Los Angeles. Larry "Doc" Sportello (Joaquin Phoenix) is a hippie, sandal-clad private eye, working out of a doctor's office but usually in a ganja-fueled haze on the couch inside his Cordita Beach bungalow. His leggy ex-girlfriend, Shasta (Katherine Waterston), pays a visit, telling him about a shady deal involving her recently missing new boyfriend, bigshot real estate developer Michael Wolfmann (Eric Roberts), and being under the suspicion that his wife (Serena Scott Thomas) and her lover are involved with his disappearance. Doc takes on the case, but it leads him down so many more avenues, including Wolfmann's closet full of ties embroidered with nude women (one of whom is Shasta), an allegedly dead junkie sax player (Owen Wilson) and his ex-methhead-turned-drug-counselor widow (Jena Malone), and the warning of the "Golden Fang," which could either be a ship, a private mental health facility, or a heroin syndicate. What's connected and what's not? Doc remains spaced-out and, under the influence of cannabis and other drugs or not, who can blame him?

Rambling and moseying along with its own smoky-haze logic that of a random, meandering shaggy-dog story, "Inherent Vice" never grabs us the way it should. Instead of being invested in Doc and the case(s), or even Doc and Shasta's relationship, we're too busy wrapping our heads around the serpentine goings-on that it's possible not much is meant to be understood at all. Some of the misleading tangents and episodic vignettes are certainly verbose and often amusing, with arch, offbeat pieces of dialogue and moments of brilliant slapstick pratfalls by Joaquin Phoenix, but even before the viewer realizes the case is the McGuffin and how it solves itself is beside the point, it's hard to care all that much about what's happening on-screen. Deliberately and stubbornly hazy and convoluted can only go so far. There are some individual gem performances amidst the large ensemble and an impeccable soundtrack of period-appropriate but less obvious choices by Can, Neil Young, and The Tornadoes, but alas, films need to be more than watching paid actors and hearing great tunes.

As the dazed and confused Doc, Joaquin Phoenix keeps proving he can do everything, and here, he's a loose-limbed hoot, both foggy and sometimes open-hearted. Doc is interesting enough to be the protagonist we're following, as his reactions to those around him prove to be the most entertaining bits in the film. He's so stoned that when firing his gun at someone he even has to ask, "Did I hit you?" Katherine Waterston might make the most impact of the females, particularly in a scene late in the film where she bares it all for a spanking and some rough sex from behind and then a wistful final scene. As gruff but henpecked Lt. Detective Christian F. "Bigfoot" Bjornsen, Josh Brolin and his absurdist shtick actually get the biggest laughs, and that includes his fellating of a frozen banana and Korean demands in a diner. There is such a rolodex of other terrific actors popping in and out that it's hard for everyone to make enough of an impression when playing colorful but one-note "characters." Reese Witherspoon fares okay as junior D.A. Penny, Doc's sort-of girlfriend. Benicio Del Toro steals the scenes he has playing sea-faring attorney Sauncho Smilax. Martin Short seems to be on the verge of turning in a juicy comeback performance as a coked-up dentist who will shag anything, but his screen time feels truncated. Jeannie Berlin has a great one-and-done moment as Doc's informative Aunt Reet. The eye-catching Hong Chau (TV's "A to Z") also has a sweet presence as sexual massage parlor worker Jade. Maya Rudolph (the director's wife) even has an extended cameo as Doc's receptionist. Finally, as Sortilège, who may or may not exist in Doc's head, singer-songwriter Joanna Newsom narrates the entire film with her raspy, dishy voice, which sounds perfect for the pulpy gumshoe genre but occasionally grates.

Paul Thomas Anderson never phones in an impersonal film, this included with Robert Elswit's smoky lensing and David Crank's detailed production design, but from the perspective of his unconventional type of filmmaking, "Inherent Vice" is kind of a bummer, by and large his most divisive film that won't be to everyone's liking. Granted, it's a cockeyed, impressionistic trip that one should just allow to wash over them without bothering with the particulars, and yet, it becomes an endurance test to get through. The film could have and should have been about something, like hippy-dippy counterculture before the start of the "Me" generation, however, it's ultimately too hollow and head-scratching to find any deeper meaning, a thoughtful takeaway, or any tangible humanity. Word on the street is that "Inherent Vice" gets better with multiple viewings. Unless the half-baked screenplay miraculously changes the second time around, once was enough.