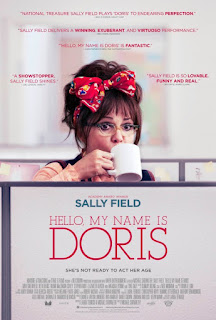 An eccentric woman of a certain age lusting after a younger man would seem like the condescending punchline in a sitcom, the cruel point of ridicule in a black comedy, or someone who needs to be issued a restraining order in a creepy horror thriller. In lieu of taking any of those wrong turns, “Hello, My Name is Doris” is a lovely, offbeat delight that adores its character but never lets her off easy, either. Everyone has a bit of "good weird" protagonist Doris Miller in them, and you should neither be fully proud nor fully ashamed of that. As character-driven and compassionately co-written by director Michael Showalter (who wrote 2001’s summer-camp satire “Wet Hot American Summer”) and screenwriter Laura Terruso (who adapted her short film “Doris & the Intern”), the film is also blessed to have Doris being played by the lovable, emotionally true (and lately overlooked) Sally Field.

National treasure Sally Field absolutely shines in her first lead role in more than two decades as Doris Miller, a quirky Staten Island spinster who marches to the beat of her own drum in the way she dresses—cat eye glasses, poodle skirts, big bows in her hair—and enjoys reading romance novels. She’s also technically a hoarder, placing sentimental value on everything she owns. When her mother passes away, Doris must go through all of her and her mother’s possessions that are seen as junk by her brother (Stephen Root) and sister-in-law (Wendi McLendon-Covey). On her way into Manhattan for work where her job is doing data entry in a cubicle, Doris gets pressed up against in the elevator and noticed by handsome thirtysomething John Fremont (Max Greenfield), the fashion firm’s new art director. Immediately, the senior has daydreams of John, and when she tells her same-aged friends, Roz (Tyne Daly) and Val (Caroline Aaron), it’s Roz’s 13-year-old daughter Vivian (Isabella Acres) who supports Doris and helps her create a fake Facebook account to connect with her crush and find common interests. When Doris realizes John is actually in a relationship, she’s lost on what to do.

To her younger co-workers (Natasha Lyonne and Kumail Nanjiani), Doris is just a cute, dotty old lady in her sixties. What’s most refreshing about the smart, fully realized writing and perfectly endearing performance of Doris is how she is able to embrace her eccentricities but not be treated as a joke or caricature. Grounded and nuanced by Sally Field, she feels like a real person, making mistakes and never above being a little selfish and dishonest. Given that most of the situations Doris finds herself in have to do with getting closer to John, the viewer will feel awkward for her and watch between his or her fingers but never dislikes Doris. She wants to make up for her lost years, having lost a chance to get married and do something with her life, and we want Doris to come out on top. As this character transforms, Field manages to be heartbreaking, hilarious and poignant.

While Field is the main ticket, the supporting cast is strong across the board. Smiling without coming off arrogant, Max Greenfield is warm and appealing as John, proper casting that ensures the viewer would develop a crush on him, too. He’s not a mere object of Doris’ desire, either, as he does lead the woman on a bit, even when it’s not a fantasy daydream of hers. Tyne Daly is also comedically spiky and heartfelt as Doris’ closest friend Roz, who speaks her mind. Stephen Root and a generally misused Wendi McLendon-Covey, as Doris’ brother Todd and his shrewish wife Cynthia; Elizabeth Reaser, as Doris’ therapist; and Beth Behrs (TV’s “2 Broke Girls”), as John’s likable aspiring-singer girlfriend Brooklyn, round out the cast.

It has been a while since Sally Field had a movie she could call her own, but she has found it in “Hello, My Name is Doris.” While Doris may want a May-December romance that has a bigger chance of happening in her dreams, her friendship with John never rings a false note. A sight gag early on involving John pumping more air into Doris’ self-deflated desk exercise ball while she’s still on it is a little forced but still absurdly amusing. There are a few times where it’s unclear if writer-director Michael Showalter and co-writer Laura Terruso want us to pity Doris, particularly when sabotage enters the story, but nine times out of ten, the film's tone and attitude are delicately handled. It’s sweet, funny, forlorn and painfully human, and anyone would have to be having a bad day if they didn’t come away charmed. We like Doris. We really like her.