Shut It: "The Other Side of the Door" creepy in places but just as creaky 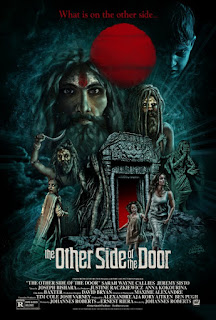 Hold the majority of unsubtle jump scares and there is a frightening, devastating, thematically poignant horror drama of grief, guilt and desperation inside “The Other Side of the Door.” Without them, it wouldn’t feel nearly as derivative and watered-down, and the overall delivery would be more satisfying. As is, the film is shuddersome in places but simultaneously creaky each time the horror becomes too literal. What “The Other Side of the Door” does have going for it is an exotic setting ripe for Hindu mysticism and an affecting central performance from Sarah Wayne Callies. Then again, “Pet Sematary,” this is not.

Maria (Sarah Wayne Callies) and antique-dealing husband Michael (Jeremy Sisto) set up their home base in Mumbai, India after having their children, Oliver (Logan Creran) and Lucy (Sofia Rosinsky). Six years after Oliver drowns in a car accident, Maria cannot bear life without her son and blames herself for his death. Live-in housekeeper Piki (Suchitra Pillai-Malik) tries to give the mother some peace by telling her of an abandoned Indian temple that will allow her to say goodbye to her son. Sure enough, Maria makes the journey. By spreading Oliver’s ashes on the temple steps and waiting on the inside, she is able to talk to him but must not under any circumstances open the door. No prizes for guessing whether or not Maria will open that door, and thus upsetting the balance between the dead and the living. Once Maria returns home, Oliver’s beloved stuffed tiger starts reappearing, even though it was buried with his body. Plants and pet animals die. The piano plays “Heart and Soul” on its own. Is the ghostly presence Oliver or something more malevolent?

When he doesn’t liberally fall back on threadbare pop-out scares, British director Johannes Roberts (2012’s “Storage 24”), working from a script he co-wrote with Ernest Riera, is on sturdy ground, paying attention to pacing and moody style, and has an effective skill with building dread in silence. The first half sets up Maria’s conflict with economy, and the extremely harrowing memory of her submerged SUV flooding with water in a river before losing Oliver is a parent’s worst nightmare. Once the just-go-with-it premise is set in motion—as soon as Maria opens that door, unbeknownst to her husband—it’s acceptably warranted for the purpose of having a movie. A credible constant, Sarah Wayne Callies (best known for her TV work) gives herself over to the emotional demands of a desperate mother. Her performance seems to shed more complexity than allowed by the screenplay, which constantly forces Jeremy Sisto’s always-antiquing Michael out of the picture that it would come as no surprise if he were having an affair or revealed to be a ghost all along. The film’s one secret weapon is 7-foot-tall Spanish actor Javier Botet, who has found his place in horror cinema as an indelible shape-shifter with his lanky body. After haunting our dreams as the nightmarish specters in the “[REC]” series, “Mama” and “Crimson Peak,” Botet plays a contorting apparition called The Myrtu.

“The Other Side of the Door” has a compelling center but falls short of its potential durability. If the stream of bad-dream jolts were edited out of the finished product, one can imagine the film might have held more suggestive power. Influenced somewhat by Japanese horror, the “scary stuff” never really rises above decomposed faces sneaking up on the living or the ash-covered cannibals of a death cult popping up where Maria least expects. A couple of odd times, the tired trope is done effectively, and a hallucination involving cockroaches inevitably earns a squirm from this viewer. It is in questionable taste, though, that the film actually uses a poor local man pounding on a car window to beg for food as a tacky ploy to scare audiences. Though there are far worse horror offerings out there, “The Other Side of the Door” too frequently succumbs to screechy shock effects, which it didn't really need.