When a Stranger Babysits: "Emelie" just as shocking as it thinks it is 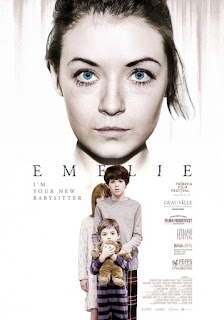 The screams come from inside the house in “Emelie,” a babysitter-from-Hell indie that works the nerves by exploiting the idea of entrusting your children’s lives to a stranger for one night. Making his narrative feature debut, director Michael Thelin rocks the audience so skillfully that it won’t matter if one has seen “The Hand That Rocks the Cradle” and the like. It is disturbing and often difficult to watch, and with such dark subject matter involving children in peril, the film probably won’t sit well for parents, but it’s rare when a film is as shocking as the filmmakers think. Troubling but still low-key, “Emelie” envelops you in its rattling embrace.

When their babysitter cancels at the last minute, parents Dan (Chris Beetem) and Joyce Thompson (Susan Pourfar) turn to a new sitter named Anna (Sarah Bolger). Before making it out to their anniversary dinner, they feel their three children are in safe hands with the (seemingly) sweet-as-pie Anna. 9-year-old Sally (Carly Adams) and 4-year-old Christopher (Thomas Bair) take to her, while it takes a little bit for the eldest, 11-year-old Jacob (Joshua Rush), to come around. Anna is loose on rules, letting the kids eat as much sugar as they want before her babysitting takes a sadistic turn. She shows favoritism to one of the children. She inappropriately asks Jacob to fetch her a tampon while she’s on the toilet. She implements a movie night for her charges when she finds their parents’ sex tape. Will Jacob learn Anna’s true identity and agenda before she takes anything to hurt them?

The film opens to a placid sight cut from any mundane fall day as a girl walks home and boys kick around a soccer ball in a field. Then, as if we are eavesdropping from the bushes, a kidnapping occurring in broad daylight sets the mood. Unfolding at a tense hum, “Emelie” is a slow-burn 80 minutes that never stretches itself thin but keeps mounting the suspense. Working from a screenplay by Rich Herbeck, the film gives just enough information. We have an inkling that “Anna” is up to no good—when Dan pulls into a driveway to pick the sitter up, she quickly rubs a drop of blood off the toe of her sneaker—but the film knows just when to show its hand without being too soon or too late. When the babysitter does reveal her sinister (and plausible) agenda, it is through her own bedtime story about a “cracked” young mother and her “cubby.” Also, the film doesn’t lose track of the parents, who are being watched by someone outside the restaurant.

When it comes to psychology, “Emelie” approaches the demented lead character with minimalism and bleak reality. Her backstory isn’t simplistic so much as it is not thoroughly spelled out. Less is more, that’s for sure, and director Michael Thelin demonstrates that method further. Without coming off gratuitous, there is a particularly upsetting scene involving middle child Sally’s pet hamster Admiral Wubbles—you will know it when you see it—that put knots in this reviewer’s stomach. With her deceptively sweet face, Sarah Bolger is chillingly subtle and persuasive as Anna/Emelie. As Anna, she is in charge of turning the screws, at least at first. The “babysitter” tells the younger ones that everyone has the superpower to pretend, and it’s proof of Bolger’s abilities to do just that as an actress, putting on a charismatic persona but delving deep into the dark, twisted corners of the human mind. The director also wrings pretty convincing performances out of his child performers who could come off like moppets, but Joshua Rush is the standout as rebellious Jacob. Ending with Until the Ribbon Breaks’ haunting down-tempo cover of “One Way or Another” over the end-credit scroll, “Emelie” unnerves and terrifies as a parent’s nightmare that will have them double-checking references—or just avoiding a sitter altogether.