Generation Slacker: "Get a Job" veers from sincere and likable to dumb and disposable 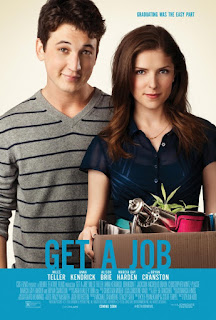 Miles Teller and Anna Kendrick look four years younger in “Get a Job,” a millennials-join-the-workforce comedy that was shot back in 2012, delayed and only now receiving a simultaneous limited theatrical and VOD release. Usually it spells disaster when a film takes a long, winding road before being unleashed to audiences, but this particular one is more of a slight, mildly amusing piffle. Even if it might not be worth the effort to go out and see, “Get a Job” is so middling that it just leaves one indifferent rather than angry.

Fresh out of college, 22-year-old Will Davis (Miles Teller) comes to think that his internship at L.A. Weekly as a video content producer promises him work, until that position is downsized. His girlfriend, Jillian (Anna Kendrick), has landed a job as a junior sales analyst at Johnson & Johnson and supports him through his trial of finding a back-up plan, while Will’s videogame-playing slacker roommates Ethan (Christopher Mintz-Plasse), Charlie (Nicholas Braun) and Luke (Brandon T. Jackson), respectively, get by as an app creator, a middle school science teacher and a Wall Streeter. After a short stint of working the desk of a motel where he was blinded by a prostitution ring, Will tries borrowing money from his father, Roger (Bryan Cranston), who’s then laid off from his management job after 30 years. Then they all have to—let’s say it together, class—get a job.

Directed by Dylan Kidd (2002’s “Rodger Dodger”) and written by Kyle Pennekamp and Scott Turpel, “Get a Job” wants to have it both ways—a reality-based dramedy sprinkled with bong hit and bodily fluid gags—but it was on more of a roll before thinking it's giving the masses what they want. For the first half, the film is episodic and more about observing than being in pursuit of a focused plot. And then a urine-specimen mishap regrettably comes into play and suddenly there’s a shift into corporate office hazing involving the downing of deer semen. How did we get here?

The talented actors are solid with what they've been given but aren't miracle workers, either. Before “The Spectacular Now” and “Whiplash,” Miles Teller showcases his then-blossoming mix of low-key charm and bravado that never fails to appeal. Anna Kendrick is always a bright presence just by showing up, but her character’s conflict is barely even explored. That’s better than the rest of the women in the cast, all of them game, but Alison Brie’s Tanya is a weirdly open nymphomaniac who upon hiring Will nearly goes into the bathroom with him while he urinates for a drug test, and Marcia Gay Harden is the ball-busting communications corporation employer who literally tells Will, “I own you.” Of Will’s perpetually stoned, videogame-playing roommates, Nicholas Braun, Christopher Mintz-Plasse and Brandon T. Jackson are occasionally funny and somehow don’t grate on one’s nerves. As Roger, who somehow keeps the loss of his job from his wife while he sits in a coffee shop with his barista muse and keeps being rejected due to his age, Bryan Cranston is the one adult performer who comes the closest to acting like an adult.

Likable in spurts but too uneven in what it actually accomplishes, “Get a Job” does ultimately have its heart in the right place, aiming to zero in on the current generation’s post-college unemployment dilemma many graduates experience. It could have remained smart and relatable, too, had the filmmakers not dumbed down their story with easy, pandering National Lampoon-esque jokes. The cast goes a long way in easing the pain, but the end result also isn't worthy of the talent it has drawn. If it's been collecting dust this long, perhaps a little more time on the shelf wouldn't have made much of a difference.