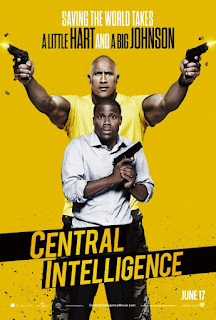 If you counted on both hands how many odd-couple buddy action-comedies had been made since the genre was first hybridized, you would need more hands. A lame title and less-than-encouraging trailers for an undeniably entertaining studio action-comedy, “Central Intelligence” is positively better than one probably ever expected. It’s as if “Rush Hour” hooked up with “Chuck & Buck” or even 2015’s misunderstood gem “The D Train.” Who knew Kevin Hart and Dwayne Johnson could be such great comedic foils?

Peaking in high school back in 1996 as a popular football star and now a married accounting office drone in 2016, Calvin Joyner (Kevin Hart) gets an unexpected visit from Robbie Weirdicht (Dwayne Johnson), who was horribly bullied when he was an overweight social outcast. Now, Weirdicht goes by Bob Stone and he has made a miraculous physical transition by packing on the muscles. With their 20-year reunion at Central High School approaching, these two acquaintances soon become embroiled in a conspiracy with the CIA. When Agent Harris (Amy Ryan) comes to Calvin’s home and work, she claims that she is Bob Stone’s superior and that he is a rogue agent who needs to be put down. Between a rock and a hard place, Calvin needs to decide if he can trust an acquaintance to whom he showed an act of kindness 20 years ago.

Breezy, amiable and unexpectedly beguiling, “Central Intelligence” works primarily because of its key ingredient: the inspired pairing between its two stars. One can see the pitch starting with the size difference between Kevin Hart and Dwayne Johnson, not unlike “Twins.” Allergic to material that deserves him, whether it be “The Wedding Ringer” or “Get Hard,” the usually hyper Kevin Hart is significantly dialed down here as Calvin. That’s not to say that his personality is tamped down; he’s still charismatic as ever, but this shift allows Dwayne Johnson a chance to have the bigger personality. As Bob Stone, Johnson is smartly aware to play broad comedy but also finds a quiet vulnerability beyond his character endearingly wearing a fanny pack and a unicorn T-shirt and having a major soft spot for “Sixteen Candles.” Even if she isn’t prone to perform comedy, Amy Ryan does straight-faced well in a standout supporting role as Agent Harris. There are also a few amusing cameos that won’t be given away here, but a household name plays Bob’s lazy-eyed former crush Debbie.

Directed by Rawson Marshall Thurber (2013’s “We’re the Millers”) and co-written by Ike Barinholtz and David Stassen (TV’s “The Mindy Project”), the film is brought home more by the fun, good-natured character dynamic than the familiar action-fueled plot involving government secrets and mistaken identity. As MacGuffin plots go, it’s serviceable and takes a complete backseat to what matters, and that’s a fair trade-off. Expectations count for a lot, and while that’s not to say “Central Intelligence” is better with one’s expectations kept in check, it delivers more of the same formula, only better with the little Hart and the big Johnson.