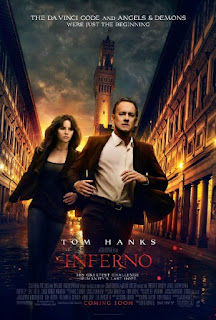 Two films ago, director Ron Howard (2015’s “In the Heart of the Sea”) was unable to crack the code of bringing both of Dan Brown’s page-turning works of fiction to the screen. In theory, there was nothing wrong with either film selling airport-novel baloney or for being languidly paced summer entertainments that added religious debate and puzzle-solving to the shoot-outs and car chases found in most frantic, effects-driven blockbusters. Instead, what should have been engrossing thrillers were low-wattage, mostly plodding, and bereft of a sense of fun and discovery. Maybe these mysteries required a lot more patience, however, 2006’s “The Da Vinci Code” needed a heavy shot of adrenaline, and 2009’s “Angels & Demons” was vaguely more thrilling but not by much.

With “Inferno,” the third time is the charm. Well, somewhat. Just as loony, dizzyingly plotted but arguably more involving than its predecessors, this beat-the-clock thriller one-ups the Robert Langdon canon by jetting forward even through the scattered, arcane details and exposition. At the start, bioengineering billionaire Bertrand Zobrist (Ben Foster) plunges to his death after warning, TED Talk-style, that overpopulation would spell the end of humanity. From there, Harvard University symbologist Robert Langdon (Tom Hanks) awakens in a hospital room in Florence, Italy, with no memory, but he is plagued by visions of Hell on Earth. Prodigy emergency room doctor Sienna Brooks (Felicity Jones) tends to him, telling that he suffers from amnesia due to a bullet grazing his head. When they are ambushed by an assassin in a police uniform, he and Sienna flee from the hospital. Then, inside his jacket, Langdon finds a Faraday pointer that projects Botticelli’s mural of Dante’s Inferno, leading him and his new female companion on a scavenger hunt to find other clues pertaining to Zobrist’s viral plan.

A viewer’s interest in the third and latest cinematic entry of Dan Brown’s literary series will be completely contingent upon whether or not they took to “The Da Vinci Code” and “Angels & Demons,” and yet, “Inferno” has more of a pulse and doesn’t suffer from catatonia. Competently directed by Ron Howard and written by David Koepp (2014’s “Jack Ryan: Shadow Recruit”), the film is rousing when it wants to be, and that’s usually when Robert Langdon and Sienna Brooks are on a wild goose chase around the very scenic Florence and Venice. As essentially one long chase scene, this should be fun, but once again, how the characters reach certain conclusions from the most rarefied of clues is too effortless to make us co-participants in solving the mystery. More than welcome, though, is some creepy infernal imagery, and the climax is strikingly staged in Istanbul’s subterranean chamber Basilica Cistern, the red underwater lighting making the still water look like a pool of blood.

Reprising the admittedly dull role of Robert Langdon for the third time—he doesn’t have as much personality as Dr. Indiana Jones, unfortunately—Tom Hanks actually gets to make a joke or two here, even while acting disoriented and groggy. The amnesia addition is a smart move, at least before it wears off and Langdon is able to remember blurry memories when the plot requires him to; for instance, it’s amusing how he can’t remember the word “coffee” for a hot morning drink, but only minutes later, he has no issue remembering his Gmail password. As Dr. Sienna Brooks, Langdon's third platonic partner this time around, Felicity Jones looks engaged. Beginning as a passenger to Langdon’s hunt, she is still Hanks’ plucky, intelligent equal with more layers to her as the film unfolds. While the previous films had estimable supporting casts that actually stole the show from Hanks, this one welcomes Irrfan Khan, who’s a hoot as the leader of a security agency in tailored suits.

Enthralling in the moment and then as stable as a house of cards thereafter, “Inferno” thinks it has a bachelor’s degree in art history, but it really has a master’s degree in baloney. As an airport-novel popcorn entertainment, it consistently follows its own preposterous logic, and it seems like everyone involved is no longer treating the material as gospel. There are double crosses, revelations, and a forced romantic relationship that feels wedged-in and oddly doesn’t get introduced until the beginning of the third act. So, what is there really to take away in the end? Very little, in fact, but at least it’s not a total drag. “Inferno” is an adequate puzzle-solver and perhaps as good as any Robert Langdon saga is going to get on film from director Howard, but at this point, it might be time for the Harvard professor to stay home and stick to the crossword.