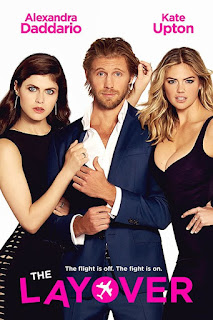 “A Film by William H. Macy” is a good place to start for what makes “The Layover” so baffling and depressing. One is willing to forgive director Macy just this once for having a lapse in discernment and getting himself involved with a project this disgraceful, but is he okay? Has he been replaced by a tone-deaf alien pod person? Out of all the stories to tell about women, what exactly drew him or anyone to this material? There’s really no way of knowing, but Macy’s second feature behind the camera, following 2014 drama “Rudderless,” was squandered on this female-centric comedy that particularly hates its female characters. There’s no way to defend a film that sets two best friends against each other and reduces them to stereotypically petty, immature, unpleasant, regressive gargoyles who destroy their lifelong friendship over a hunky man. If the characters and audience were treated with respect and intelligence, or if any of it were actually funny, that might make the proceedings slightly more forgivable, but that’s never the reality. As if any movie ever needed to evoke the nightmare of Kate Hudson and Anne Hathaway sabotaging each other after neither one would give up the same wedding venue and date in 2009’s equally insufferable “Bride Wars,” “The Layover” is lazy and desperate at best, and insulting and misogynistic at worst.

Kate (Alexandra Daddario) and Meg (Kate Upton) are best friends who are both in flux. Finishing up the last day of school before summer vacation, Kate is an English high school teacher who gets told by her principal that she should change career paths and cut hair instead. Meg, a cosmetics saleswoman, botches a sale when the major company realizes her products are made in North Korea. One is more conservative and stable than the other, and the other is promiscuous and blowsy. After their mutually rough day, Meg drags Kate out of bed to be spontaneous and start their vacation by booking a flight from Seattle to Fort Lauderdale (figure that one out). Boarding the plane, Kate and Meg get all hot and bothered when their middle seatmate arrives in the form of Ryan (Matt Barr), a blonde, hunky firefighter. Both women are instantly smitten and begin flirting with Ryan, but that’s only the beginning. Their flight gets cut short when Hurricane Cindy hits, forcing them to endure a layover in St. Louis and check into a hotel. As soon as they run into Ryan on the elevator, he invites them to the lounge for a drink, and the game is on, as Kate and Meg compete and one-up each other like bitter enemies, all because of one man.

More than a breezy farce that audiences aren’t supposed to give a lick of thought to, “The Layover” is a mean-spirited endurance test with an IQ relative to room temperature. Kate and Meg are set up as being best friends since fifth grade who live together, watch “The Bachelor” together and down a bottle of Chardonay together. Why one would want to throw away their sisters-before-misters bond for a chiseled piece of ass they just met is beyond anyone of sound mind. The birdbrained sitcom conflict that screenwriters David Hornsby & Lance Krall (TV’s “It’s Always Sunny in Philadelphia”) dreamt up is one-dimensional and contrived beyond belief that it’s ridiculous to even try believing a single second of it. Of course, if these characters acted sensibly and got over this little competitive tiff, there’d be no more movie otherwise, and that might have been preferable. Kate seems like the more well-adjusted one at first, but both Kate and Meg just proceed to sink to unbelievably low levels of immaturity and sabotage. The number of times the script strains for humor as these women one-up and destroy one another are more pitiful and embarrassing than humorous, but everyone involved apparently thought all of this was hilariously wacky. When Ryan wants to relax poolside, Kate tries to keep up with her friend’s bust by hacking up her one-piece bathing suit that works in her favor. One of them attempts to drug the other. Meg triggers Kate’s fear of heights by getting Ryan on a hot air balloon with a one-eyed operator, who ends up getting a cork in his good eye. They both compete in a knock-down, drag-out food fight at the hotel’s continental breakfast. And, then, when Meg gets locked in a disgusting gas station bathroom and covered in feces on her way out the window in the film's crassest and unfunniest gag, the viewer feels her pain all too well.

Alexandra Daddario and Kate Upton are game and committed for whatever comes their way, unafraid to look goofy and act terrible for the sake of a theoretical laugh, but this dreck is beneath even both of them. Who are we supposed to root for when Kate and Meg have such a shallow, single-minded goal? Daddario can be likable and has fine comedic timing—she was one of the few bright spots in this summer’s “Baywatch”—but not even she can retain her dignity. Upton isn’t much of an actress, although she could be a charming performer with a better project. If burping after chugging a Dr. Pepper in front of airport security is considered comedy, she gets more comedy to do here as party girl Meg than she did in 2014's “The Other Woman,” which was by no means great but celebrates female independence by comparison. Matt Barr (TV’s “Sleepy Hollow”) gets to play the tug-of-war object known as Ryan. It’s not too surprising that, by the time the story has to wrap things up, he’s not as perfect as Kate and Meg thought. Barr is definitely easy on the eyes in an athletic surfer-dude kind of way, but he’s given no more to do than be a bland hottie with a body and little to say. Matt Jones (TV’s “Mom”) seems to be the most decent person in the film as Craig, a jeweler at a hotel for a convention who ends up helping the love triangle get to Florida. However, the script even uses and abuses him, making him the cause of a car accident based on Meg’s payback that was directed at Kate.

High on cruel humiliation but low on genuine laughs, “The Layover” could have worked, even with the same cast and William H. Macy's serviceable direction. The script just doesn’t do right by anyone, wasting some very funny people (Molly Shannon, Rob Corddry, Kal Penn) who get two scenes apiece to avoid stealing the attention off the silly plot proper. Maybe two women should’ve written the script; then again, no women would concoct such a reductive premise in 2017. There are two other female characters, one of whom is having an affair with a married man and the other a nagging, emasculating bride. Needless to say, there’s little affection for anyone on screen with XX chromosomes, and yet, there’s a disingenuous turn-around as the film’s forgone conclusion wants to have it both ways with a falsely positive ending about female friendships and empowerment. Akin to sitting in the aisle seat on a long flight, having your elbow slammed by the flight attendant’s beverage cart again and again, and having the back of your seat kicked, “The Layover” succeeds as a miserable experience. Alison Bechdel will be furious.