Midlife Perfection: Witherspoon gets to be her perky, winsome self in blandly nice "Home Again" 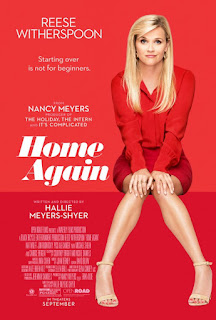 First-time writer-director Hallie Meyers-Shyer must have learned a thing or two from filmmaker parents Nancy Meyers (2015’s “The Intern”) and Charles Shyer (1987’s “Baby Boom,” 1991’s “Father of the Bride,” 1994’s “I Love Trouble” and 1995’s “Father of the Bride Part II”) because her feature debut, “Home Again,” has that glossy, Meyers-Shyer touch all over it. Since she has grown up on the sets of her parents’ movies, this film, unfortunately, exists in such a cushy Hollywood bubble that it’s hard to buy into and relate to any of it. A great deal of the appeal behind mom Nancy Meyers’ films is the luxuriously cozy, bourgeois interiors and decor out of a Pottery Barn, and while Meyers-Shyer delivers in that respect somewhat, everything else reminds of a brightly lit sitcom that’s too cute, too banal and in desperate need of a reality check. If anything, “Home Again” might go down easiest as a fluffy, flavorless diversion that one can wash the dishes and fold the laundry to without missing much.

About to turn the big 4-0, interior decorator Alice Kinney (Reese Witherspoon) doesn’t know what the next step in her life will be. She has separated from her music exec husband, Austen (Michael Sheen), and moved her two adorable daughters, Isabel (Lola Flannery) and Rosie (Eden Grace Redfield), from New York and back to Los Angeles in the pastoral Spanish ranch where Alice grew up. Her late father was an Oscar-winning, Cassavetes-like filmmaker and her mother, Lillian (Candice Bergen), was his muse before Dad’s philandering ended the marriage. When Alice goes out with her gal pals (Dolly Wells and Jen Kirkman) to celebrate her birthday, she meets a handsome twentysomething, Harry (Pico Alexander), along with his brother Teddy (Nat Wolff) and buddy George (Jon Rudnitsky), who make up an aspiring filmmaking team. They dance the night away with the help from a flowing amount of shots and all end up back at Alice’s pad, and while Alice and Harry start to hook up, it ends early. In the morning, Alice’s mother arrives, only to be charmed by the three guys and encourage her daughter to let them stay in her guesthouse until they get on their feet. Instead of becoming the Houseguests From Hell, these three become live-in nannies to Alice’s girls, mister fix-its to her kitchen cabinets, designers to her business website and, in Harry’s case, a regular sleeping partner. Oh, gee, Alice’s life is awful but will surely get better.

“Home Again” is a complete fantasy, even without wizards and fire-breathing dragons, but did it have to be such a bland one that goes for the tired cliché when it should be steering clear of it? When the viewer first meets Alice via voice-over and still photographs of her and her filmmaker father, the film gives one hope that writer-director Hallie Meyers-Shyer, herself, is writing what she knows and will bring a personal perspective, as she, too, has parents who are in the biz. Instead, this woman-in-her-40s story follows the trajectory of an aggressively nice and facile confection about a woman with no real problems but to have three men 13 years her junior doting on her. Save for Harry standing up Alice to a dinner party, George taking a freelance rewriting job behind Harry’s back, and the three young men’s mad dash to a fifth grade school play in the film’s dramatic climax, there’s little tension, conflict, or drama that can’t be solved with a hug and lasagna leftovers. There’s even a subplot with Alice trying to get her interior decorating career off the ground and snagging her first client in a vapid socialite (Lake Bell), but the only worthwhile incident that comes out of that is Alice’s amusingly drunken comeback. Basically, everyone is just so darn nice that even Alice’s British music-exec husband really isn’t that bad.

Reese Witherspoon has done “nice” already, and coming off her stunning, complex work in HBO’s “Big Little Lies,” “nice” seems like a waste of her wide-ranging talents. The fetching actress can’t help but just show up and be a charming ray of light, however, one wishes the character she’s playing had been more interesting and layered on the page. Alice leads a comfortable life with friends and a family and no detectable financial worries, and it only seems to get better. Witherspoon does at least get to be her perky, winsome self, and admirably, the film never judges Alice when she begins sleeping with Harry. Pico Alexander (2016’s “Indignation”) is boyishly cute as suave director Harry, but he is such a vanilla bore that it rings false when Alice sleeps with him sober. Nat Wolff is appealing as usual, playing the actor of the trio, but one never gets a sense of Teddy’s talent as an actor that he might as well be this film’s Vincent Chase from “Entourage.” As screenwriter George, who learns the way Hollywood works when hearing out their producer’s notes on his script, SNL cast member Jon Rudnitsky is much better, stealing scenes with his fresh, charismatic presence and energy that do not exist in the supposedly hunky Harry. This time working opposite Witherspoon to play her mother and not her future mother-in-law like in 2002’s “Sweet Home Alabama,” Candice Bergen is lovely to see again on screen and gets in some choice one-liners, but she’s largely underutilized.

As idle comfort food that never strays from a light and airy mood, “Home Again” is pat, predictable and oh so pleasant, and terminally so. Dean Cundey’s lensing is creamy and sun-bleached beyond belief, but the writing is not at all sharp, aside from a few moments during meetings with Hollywood agents all named Jason and a Jason Blum-like horror producer (Reid Scott), and there are about four blissful montages too many where all conversation is drowned out when characters smiling and laughing is apparently the most efficient shorthand. Alice’s life just doesn’t seem that rough or relatable to see an entire film about it. Why go to “Home Again” when there’s an easy, preordained solution for everything?