Left for Dead: "What Keeps You Alive" a tightly coiled, unforgiving study in pulling the rug out 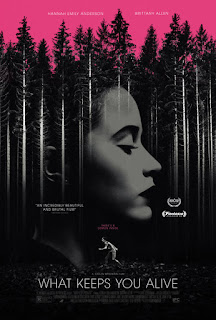 As anyone familiar with the horror genre knows, nothing good ever comes out of a couple taking a retreat to the woods. Going a step further, “What Keeps You Alive,” written and directed by Colin Minihan (2016’s “It Stains the Sands Red”), takes the universal fear of not really knowing another person, particularly a significant other, and turns that betrayal into a startling, tensely compelling cat-and-mouse game of survival. In a refreshing change of pace—and it’s about time since 2005's "High Tension"—this is a harrowing relationship horror film between two women and their shifts in power.

Jackie (Hannah Emily Anderson) takes her wife, Jules (Brittany Allen), to her great-great grandfather’s rustic lakeside home in the remote woods for a romantic getaway to celebrate their one-year anniversary. On their first night, they drink wine and canoodle on the couch, until one of Jackie’s childhood friends, Sarah (Martha MacIsaac), stops by; she still lives across the lake with her husband (Joey Klein) and wanted to make sure everything was okay on account of the house being empty for so long and seeing the lights on across the way. Jules is taken aback when Sarah addresses Jackie as “Meghan,” but Jackie explains that she never liked her name and changed it once she came out. The next day, while Jackie goes into town, Jules is still hurt by her partner’s lack of communication but soon comes to the realization that Jackie is not the woman she married.

Too much has already been divulged, but the less one knows going into “What Keeps You Alive,” the better. Writer-director Colin Minihan sets a simmering pace and a tone of deceptive normalcy. Once there’s a shockingly visceral jolt of violence that knocks the wind out of the viewer, the film craftily flips and skews expectations, redefining the kind of story being told. Post-reveal, the film might have gummed its tension, but that is never the case here. Minihan has such a controlled directorial hold and brings drastically impressive verve to his minimalist narrative behind the camera, employing dexterous cinematography by David Schuurman that efficiently sets the geography of the house from the get-go and later has the camera soaring over the lake in a thrilling canoe chase. An artfully edited sequence of cleaning up a crime scene, illuminated by a black light and set to piano keys, is chilling, and a second-floor scuffle is effectively executed, leaving the viewer to watch the ceiling from the first floor rumble and wait for the victorious party to come down the stairs. The use of a classical aria over some of the violence also works, as does the return of Silverchair’s “Anthem for the Year 2000,” which Jules claims to be their song in Jackie’s jeep when they first get to the house.

More than up to the different demands the script asks of them, Brittany Allen (2017’s “It Stains the Sand Red”) and Hannah Emily Anderson (2018’s “Jigsaw”) are both excellent. Physically and emotionally, Allen (the director's wife) is put through the wringer as Jules, a woman who opened her heart to the person she trusted most, only to have it broken and possibly stopped in an unimaginable nightmare that will force her to fight tooth-and-nail. An expert pretender of changing emotions on a dime as Jackie, Anderson sells her normal, smiley veneer and the sinister motivations hiding underneath, while digging into the heart of darkness that is influenced by both nature and nurture. Although the film narrows in on Jules and Jackie, Martha McIsaac (2009's "The Last House on the Left") makes an indelible impression with only a handful of scenes as Sarah, who hasn't seen Jackie/Meghan in a long time, stills hangs onto a traumatic memory from their past, and might be the one who unintentionally opens up a can of worms.

Where Jules and Jackie begin and end as a couple does not devolve into standard victim and victimizer tropes; what Minihan achieves is a bit more complex than that and never loses the emotional component that comes with a human tragedy, often intercutting the present action with black-and-white memories of the once-happy couple. Even if the climaxes start to multiply before the ultimate end—a final decision Jules makes is based more on moving the plot along than common sense—“What Keeps You Alive” is a tightly coiled, unforgiving study in pulling the rug out and crafting tension with vicious force.