Half Full: "Glass" dares to take chances as the satisfying capper of a retroactive trilogy 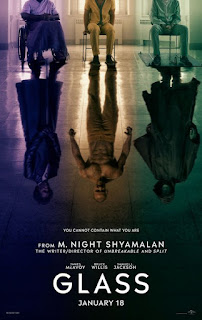 Following the influential humdinger of a Twist Ending™ in 1999’s “The Sixth Sense,” writer-director M. Night Shyamalan somewhat backed himself into a corner by having to deliver an airtight twist ending every time. His follow-up, 2000’s “Unbreakable,” paid off, albeit not in ways audiences were expecting, as it was a moody, absorbing thinking-person’s superhero drama ahead of the inundation of superhero movies today when comic books were still niche and not as mainstream, but it was unfairly compared as if it had to show up the discovery of a lead character being deceased the entire time. Who knew, then, that it would be conceived as the first film of a trilogy once 2017’s “Split” came along; not only was that film a tense, well-crafted thriller on its own but sneakily ended up revealing and reframing itself with a tag in the last five seconds to be a stealth sequel to “Unbreakable.” Now to cap off a trilogy that’s retroactively been 19 years in the making, “Glass” is the satisfying final chapter with a clear vision and purpose in deconstructing comic-book mythology and superhero identities.

Set three weeks after the conclusion of “Split” when sole survivor Casey (Anya Taylor-Joy) was rescued from Dissociative Identity Disorder-afflicted captor Kevin Wendell Crumb (James McAvoy) in the basement of the Philadelphia Zoo, the film begins with Kevin having kidnapped four high school cheerleaders. Meanwhile, vigilante superhero David Dunn (Bruce Willis) is busy capturing criminals in his rain slicker as “The Overseer,” using his home security agency as a front with son Joseph (Spencer Treat Clark), and when he happens upon Hedwig, one of Kevin’s personalities, and brushes up against him, David uses his extrasensory abilities to locate where the four kidnapped girls are being held. In saving them, David and Kevin, now “The Beast,” cross paths and fight before the police department arrests them and sends them both to psychiatric facility Ravenhill Memorial Hospital. There, they are met by psychiatrist Dr. Ellie Staple (Sarah Paulson), who specializes in treating patients with delusions of grandeur, and plans to put them under the microscope. Along with David and Kevin, David’s archenemy, the brittle-boned Elijah Price/Mr. Glass (Samuel L. Jackson), has also been institutionalized in the same facility, sitting in his wheelchair in a vegetative state for years. What will happen next with the reluctant hero, the anarchist, and the diabolical genius living under the same roof?

James McAvoy’s riveting performance of portraying twenty-four different personalities was a masterclass in acting, and he is a marvel once again, seamlessly bouncing between distinct personalities (and adding a couple of extra personalities) in a single scene. Without phoning it in, Bruce Willis shows up to work and delivers the same kind of laconic, understated work he did in “Unbreakable” as David Dunn. Samuel L. Jackson is deliciously good as Elijah Price/Mr. Glass; without speaking a word for a large chunk of the film, he still gives good glare and presents himself as a selfishly motivated mastermind out to create a real-world creation of a comic book. Sarah Paulson might not be given enough to actually play (at least at first), but it is a testament to her talent and cadence that she can make Dr. Ellie Staple’s many psychobabble monologues transfixing. The participation of Casey is pivotal as she suffers from Stockholm syndrome, even if her actual screen time is limited, but Anya Taylor-Joy’s quiet stillness is affecting.

Cackling in the faces of audiences who have been conditioned to know the beats of a superhero film, the visually sharp and emotionally compelling “Glass” defies expectations, zigging when one expects it to zag. The fact that Dr. Ellie Staple wants to debunk these supposed superhumans’ “delusions” seems like a non-starter, considering this is the third film in a trilogy and the viewer is already well aware of their capabilities, but it is all part of writer-director M. Night Shyamalan’s master plan. Whereas “Unbreakable” was an origin story for David Dunn and “Split” ended up being an origin story for Kevin Wendell Crumb, “Glass” is the culminating cross-over, weaving a spell that rarely shatters, even when Shyamalan gets a touch too cute and overtly self-aware about certain tropes and archetypes. One can see “Glass” dissatisfying or even angering comic-book fans who want to see a big-budgeted superhero actioner, but let them be mad. There certainly are reveals, however, the real “twist” here is that audiences do not get the conventional superhero vs. supervillain showdown; alternately, the denouement is small and bleak, but the film’s final moments do end on a note of hope. “Glass” is certainly not subtle—Shyamalan can be very on the nose—but this is audacious pop filmmaking that dares to take chances at the risk of failing, and that kind of chutzpah is something to admire.