"Arthur" needless but a good deal of fun 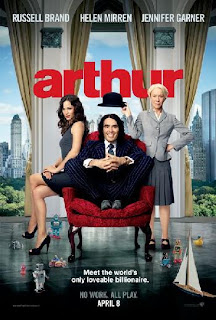 To find enjoyment in "Arthur," it depends on your tolerance for the remake business and Russell Brand's brand of humor. The world probably wasn't clamoring for a remake of the 1981 Dudley Moore-Liza Minnelli comedy—it holds up just fine, even today, but wasn't a classic to start. And the taller Brand has some pretty big duds (and the impish Moore's top hat) to fill as the pampered, happy-drunk playboy who's worth $950 million. You just have to go in with the right attitude, not expecting Brand to be the Moore of this generation. He's basically playing daft, saucy, British Russell Brand, but he makes this Arthur entertaining and frequently amusing. Taking over the Oscar-winning John Gielgud role, Helen Mirren classes it up in the gender flip as Hobson, his dryly sarcastic damage-control nanny, and pairing them together is pretty inspired. Arthur's negligent, bitchy mum (Geraldine James) threatens to cut him off from the money if he doesn't marry Susan (Jennifer Garner), a wealthy, domineering business woman who doesn't even love him and vice versa.

Delightfully quirky mumblecore graduate Greta Gerwig gets placed into the Liza Minnelli role as kooky, unlicensed N.Y. tour guide Naomi who aspires to write children's books (quirky!). She's an infectiously cute ball of sunshine and approaches her character with naturalism and plausibility. Predictably, he loves Naomi, attempts at getting a job without swigging from his flask, and learns to clean up his sloshing act. After their quick meeting, Arthur and Naomi's romance at first feels rushed and forced, succeeded by an extravagant date in Grand Central Station over candle light with Pez dispensers. Then again, the two are sweetly appealing together. Before he gets too much overexposure, Brand may need an intervention soon, but for now, he puts his own spin on Arthur, bringing an endearing child-like quality to his libertine, wild-card shtick and delivering his hilarious lines on cue. He's more loud than Moore's droll, sad-and-lonely performance but still likable. And Mirren always keeps him on his feet (same goes for Evander Holyfield's in one scene) and stands as the mother figure. Garner has the rare opportunity to act unlikable in the thankless shrew part, but she has fun with it. As Arthur's chauffeur Bitterman, a wasted Luis Guzman has one funny sight gag dressed in his Robin suit (and Arthur as Batman), going on a just-for-kicks drive in their Batmobile.

TV director Jason Winer ("Modern Family") indiscriminately uses a lot of close-ups and telephoto lense shots, but his snappy pacing and cast bail him out. Peter Baynham's script does a nice job of modernizing the material in terms of addiction and the economy, even if it's surprisingly sanitized without any hookers or a slurring, incoherent Arthur. A minor remake of a minor original, "Arthur" still has plenty of laughs, pretty consistently actually.