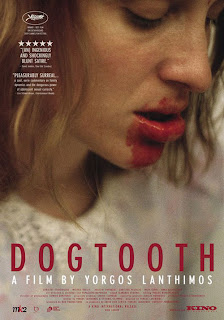 A very strange, disturbing, and provocative curio from Greece like "Dogtooth" could go either way: it's either unwatchable or strikingly interesting. It's the latter. And yet it's still not an easy film to recommend with loving embrace.

In "Dogtooth," a family isolates itself in their country estate, as only the father (Christos Stergioglou) can leave the property to work at his factory job. The three teenagers are shielded from the world but given free reign to the sizable grounds with a yard and swimming pool. The brother (Hristos Passalis) and two sisters (Aggeliki Papoulia and Mary Tsoni) play endurance tests for fun, talk in their own language, and listen to a daily tape that teaches them new words for things. (A salt shaker is a "phone" and a big light is a "pussy," just to name a few.) A high fence keeps them in their compound away from the man-eating cats, as their father tells them. Father teaches his children to get on all fours and bark like dogs to protect themselves, and they can leave when their first dogtooth falls out. The only telephone in the house is locked away in the parents' bedroom and VHS tapes that aren't family videos are evil.

Also, when a Frank Sinatra record plays, they're told it's their grandpa. If that's too normal and harmless for you, the father brings over a blindfolded security guard from his work to have sex with his son. Eventually, that woman starts giving the eldest daughter presents to lick her "keyboard." And you thought your family was weird? Are these parents experimental home-schoolers or cruel, brainwashing prison guards? Like an askew family portrait of deranged parents and children who don't know any better, all you can ask yourself is what will happen next. What the eldest sister does with a dumbbell will make you gasp and wince all at once.

Filmmaker Yorgos Lanthimos uses his camera very effectively and in the most still, voyeuristic fashion for observation and quick but brutal shocks. The performances are deadpan and the pacing deliberate. Only does Lanthimos not clearly lay out his point (Is it an allegory? Or a sick-joke black comedy? Who knows?) and is just as weird-for-weird's-sake as Lars von Trier but less self-congratulatory. "Dogtooth" is so daring and daringly open-ended that, much like a car accident, it's hard to look away from a single carnal/violent frame. Like it or not, there's still nothing else quite like it.