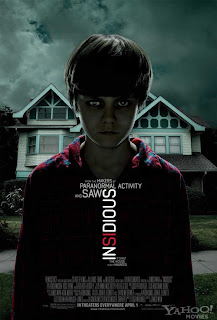 A likable couple, Renai (Rose Byrne) and Josh (Patrick Wilson), have just settled into a spacious Craftsman house with their two young sons and baby daughter. Once the one son, Dalton (Ty Simpkins), falls off a ladder in the dark attic after he hears a sound, he falls into a coma that doctors can't explain. He's basically asleep but cannot be woken up. Renai starts experiencing disturbances in the house, such as raspy voices on the baby monitor, seeing spooky faces and figures in bedrooms, and their alarm system going off in the middle of the night. But this couple has an uncommon common sense for a horror-movie couple: they actually move. Just when you ask "Who they gonna call?" Josh's mother (Barbara Hershey) luckily has the number for a medium named Elise (the under-appreciated Lin Shaye). Without being a spoiler, Elise agrees to help them, first telling Renai and Josh that it's not their house that was haunted but their son.

Although a succubus to "Poltergeist," "The Shining," and "Paranormal Activity," "Insidious" is a scary, creepy, fun machine, even if you watch it through your fingers. Wan has a way with using silence and a slow-burn build-up for mood and tension until he's ready to goose us. And when he does, the jump scares are noisy but work like gangbusters and are never telegraphed by a beat, like waiting for a cat to jump out for a cheap "gotcha" or an "arm on the shoulder" false alarm. The scares will have you jumping out of your skin. It also helps that Byrne and Wilson, both good actors, register as a real couple. When Shaye does show up, she has kooky fun with the Zelda Rubinstein role, as do Whannel himself and Angus Sampson as a pair of comic-relief ghostbusters dressed as Mormons who always one-up one another. The visual style is cold and desaturated, and the music score by Joseph Bishara (who plays the "Lipstick-Faced Demon") may be screechy but it's also classic Gothic horror.

Even if the mythology feels a bit half-baked, throwing astral projection and a dark dimension called The Further into the mix, the climactic sequence is visionary and reminiscent of a dark, fog-shrouded nightmare that might exist in Wes Craven's original "A Nightmare on Elm Street" and at one point Ridley Scott's "Legend." And the filmmakers' spastic, strobe-light editing from "Saw" doesn't come out until the big séance scene. Ultimately, the movie is stacked with some of the creepiest images seen in a long time, especially a Darth-Maul-looking demon standing in the shadowy corners of Dalton's bedroom, and Tiny Tim's caterwauling ukulele tune "Tiptoe Through the Tulips" on a record player is put to memorably weird and inspired use. "Insidious" will leave horror fans giddy and, like a theme park ride, you'll be holding your breath as a door opens and everything goes quiet. Keep your hands inside the tram car on this ride.