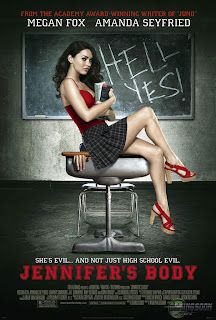 Bloody and wickedly funny, "Jennifer's Body" might go down as one of the best movies about a demon-possessed, boy-eating high school non-virgin turned succubus. Do you hear a teen-movie cult status a'comin? For her sophomore effort following 2007's "Juno," Oscar-winning dialogue queen Diablo Cody takes a stab at a horror comedy, and Homeskillet, it's more interesting and layered than one would expect.

Like the Regina George “mean girl” of the Midwestern town Devil's Kettle, Jennifer Check (Megan Fox) is a socially relevant, physically sound sex kitten on the high school flag team. Attached to Jennifer's hip is her bestie-since-the-sandbox, mousy, bespectacled Needy (Amanda Seyfried), who does anything Jennifer tells her. One night out, Needy gets dragged to a hickish tavern for a gig performed by a "salty" indie-punk band, Low Shoulder, from the city. After the whole venue goes down in flames from an electrical fire, the band and lead vocalist Nikolai (an amusingly creepy and seductive Adam Brody in eye-liner), who thinks the band's only chance to hit it big like Maroon 5 or getting on Letterman is by sacrificing a virgin to Satan, kill an entranced Jennifer ... but Jenny ain't no virgin. When she comes back evil, she's covered in blood, spitting up black, spiky bile, and very, very hungry. Then at school, she's seducing boys like the literal man-eater she is and going on a munch-a-thon (so her glowy, Neutrogena-perfect complexion and hair don't lose their luster). As Needy says, Jennifer is “actually evil, not high school evil," but can she stop her BFF's eating spree before Needy's boyfriend Chip (Johnny Simmons) becomes next on the menu?

Uneven but fun and clever, "Jennifer's Body" may never be scary or funny enough, but mixing horror and comedy is always a hard tone to straddle. Playing it like "Heathers" crossed with the 2000 teen-angst horror film "Ginger Snaps," director Karyn Kusama (2000's "Girlfight") never smoothly gels it into the ha-ha, post-"Scream" horror movie she probably wants it to be. (And Kusama must be a horror fan to have an "Evil Dead" T-shirt and poster in Needy's bedroom.) Just the same, there are some creepy (if never scary) moments with schlocky effects and lots of plasma (Jennifer grinning as a dazed, blood-thirsty monster in her bloodied white jacket is a chilling sight). And the dialogue is punched up with dark humor and Cody's signature teenspeak. Otherwise, the film works more effectively as a tragic, weirdly touching fairy tale about a female friendship carried out in slasher-pic tropes.

Fox can't act a damn when she's running from robots, we know that, but here, she does a nice job of sinking her teeth into the vampy title role, portraying vulnerability and dropping one-liners with impressive timing. Dudes in the theater may be disappointed Fox doesn't reveal her foxy gargoyles, but she does swim naked across a pond in a beautiful overhead shot to wash away the blood from her last victim. Seyfried is actually the star here, narrating the story in flashback from a women's prison cell with her opening statement being “Hell is a teenage girl." As Needy, the talented young actress approaches the role with sincerity without overstating Needy's mousiness. Naturally, she's gorgeous even behind the dorky glasses and with frizzy, Jan Brady-ish hair. Fox and Seyfried share an alternately uncomfortable and titillating girl-on-girl makeout kiss with Fox (“We can play boyfriend/girlfriend”) that's not as exploitative or gratuitous as the Denise Richards-Neve Campbell lesbian kiss in "Wild Things." In fact, it adds a layer to the girls' touchy, borderline-romantic, though decaying friendship that the clunky childhood flashbacks don't. The only adults are J.K. Simmons as a hook-handed teacher, Amy Sedaris as Needy's cool but not-always-there “Ford-tough mama bear,” and Cynthia Stevenson as Chip's pepper spray-pushing mom. Even if their roles are small, they make effective comic walk-ons. Besides, aren't parents always left in the dark in horror movies?

In her fresh perspective on teenage adolescence, Ms. Cody's stylized dialogue surely had a fresher rhythm in "Juno." Here, it sometimes sounds distractingly forced like voice boxes from Cody's mouth. But, forshizz, the chick has a way with words. Her verbal exchanges are still snappy and snarkily amusing, loaded with a language all its own and winky pop culture references out the wazoo. Low Shoulder's song “Through the Trees” is memorably tantalizing in its evil dreaminess and thematic symbolism. It becomes a leitmotif, like Falco's “Rock Me Amadeus” from this year's "Adventureland," and is exploited as some amusing satire when the band releases it as a tribute song to commemorate the Devil's Kettle teens killed in the fire. On the whole, the feminist "J Bod" (for short) has smarty-pants writing, stylish direction, and is a better bloody time than the average slasher fare. Yeah, "Halloween II," you heard us; we'll take “trying hard” over lazy trash any day. For reals.